Crimes and violations against Syrian children

Under international laws, children benefit from the protections granted to civilian non-combatants 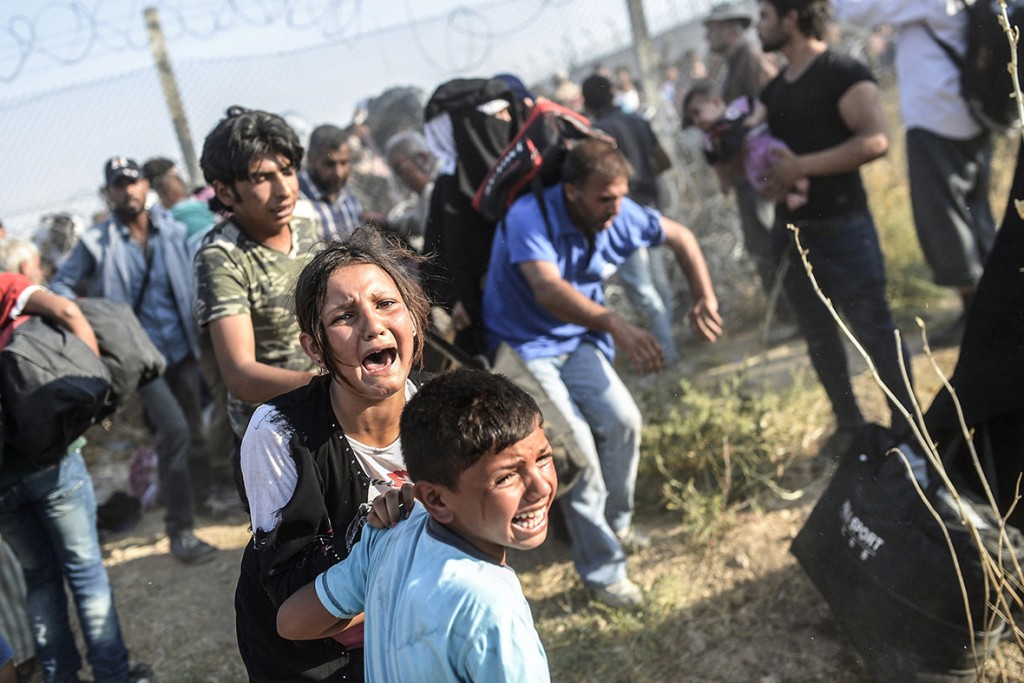 International humanitarian law grants children broad public protections, especially during emergencies and armed conflicts, whether international or non-international in nature. Under these set of laws, children benefit from the protections granted to civilian non-combatants. Because of their vulnerability, humanitarian law also grants children protections through the Geneva Conventions and their additional protocols, which stress that children taking direct part in hostilities shall not be deprived of these special protections. In accordance with Articles 27–34 of the Fourth Geneva Convention relating to the status and treatment of protected persons, as well as the additional protocols, children shall be entitled to fundamental guarantees, especially respect for their safety and honor, and shall be protected against coercion, corporal punishment, torture, collective penalties, and reprisals.

In the case of non-international armed conflict, children have the right to guarantees stated in Article 3 of the Geneva Convention and Article 4 of the Second Additional Protocol, which stipulate that children: ”neither the civilian population nor the civilian persons shall be subject to any kind of attacks”.

The Fourth Geneva Convention stipulates the provision of special protections for children. While the First Additional Protocol specifically affirms the principle of special protection for children, stating: “Children shall be the object of special respect and shall be protected against any form of indecent assault. The Parties to the conflict shall provide them with the care and aid they require, whether because of their age or for any other reason.”

The 1989 UN Convention on the Rights of the Child (UNCRC), which Syria has ratified, guarantees children protection from torture and other cruel, inhuman or degrading treatment or punishment. As per the convention, all signatories shall respect the rules of international humanitarian law applicable to children, and to take all feasible measures that ensure the protection and care of children affected by armed conflicts.

Within the framework of international human rights, perhaps the most important document relating to the protection of children is UN Resolution 3318 (29) of 14 December of 1974, which calls for the protection of women and children both in emergencies and armed conflicts. The document specifically:

Despite ratifying these laws and conventions, the Syrian government, along with its armed forces and security services, have committed numerous war crimes violations against Syria’s children. Thousands of these crimes have been documented by international investigators and human rights organizations.

These crimes fall within the following categories:

During the period 18 March 2011–20 October 2013, Syrian government forces are recorded to have killed over 12 thousand Syrian children, totaling some 8,413 male and 3,614 female victims. Some 2,344 of these victims were under ten years of age, with 391 of them infants. Some 560 children were recorded to have been executed in with bladed weapons, as was the case with massacres committed in Karm al-Zeitun and the Rifai districts of Homs city. Similarly, other atrocities included incidents in the Ras al-Nabaa district in Baniyas and in the nearby town of Baida, Tartous. Other executions by shooting took place in other regions and governorates of Syria, according to detailed reports by the Syrian Network for Human Rights, the Syrian legal committee and legal clinics.

Methods used to carry out the murder of children ranged from bombing to sniping, as well as incursions, field executions, siege and starvation.

The number of children killed in Syria during the period 18 March 2011–20 May 2013 were distributed among Syria’s provinces as follows:

In the period between 18 March 2011–20 November 2018, Syrian government forces and its allies killed more than 21,631 children, including 12,004 males and 9,627 females. Included in this number are more than 400 children who were killed by the Syrian government’s use of internationally banned weapons, such as chemical weapons, noxious gases, cluster bombs, and improvised barrel bombs. Several massacres carried out with bladed weapons display characteristics of sectarian cleansing, especially in the Houla region (Homs), Baniyas (Tartous), Jdaidet al-Fadl and Qalamoun (Damascus countryside), as well as in the northern countryside of Hama and Aleppo.

During the period from 18 March 2011–20 October 2013, operations carried out in populated areas by Syrian government forces resulted in the injury of more than 300 thousand Syrian children. Incidents of harm ranged in seriousness, with many facing life-altering or life-ending injury, including some 1,300 amputations and 800 cases of children dying after succumbing to their wounds.

During the period 18 March 2011–20 October 2013, Syrian security services arrested more than 11,700 Syrian children. Most of them were subjected to severe methods of torture, with some 92 children documented to have died from injuries sustained during torture.

During the period 18 March 2011–20 October 2013, some 400 documented cases of rape were carried out by pro-government forces against children under the age of 18. Most cases occurred when the pro-government forces carried out incursions into residential areas. Because families are often reluctant to report rape violations toward their children, the actual number of child rape cases certainly exceeds the documented number.

Despite this, some 516 cases of sexual violence against children were documented to have been carried out by Syrian military and security services. Acts of sexual violence include: rape or harassment during raids; forced marriages; sexual assaults; forced nudity and contact with children’s bodies. According to documentation, cases of rape against children were carried out in Rifai, Karm al-Zaytoun, Baba Amro (Homs city), as well as in the Damascus countryside, Jisr al-Shughour (Idleb), Daraa, Hama, Lattakia and Aleppo.

Government forces are documented to have used children as checkpoint guards in a number of Damascus neighborhoods. With the government’s surge in demand for fighters, militias loyal to the Assad regime increasingly relied on recruitment of children under the age of 18. In 2017 alone, some 349 children were documented to have been recruited.

During the course of the war, Syrian military and security services have used armed violence and indiscriminate shelling against large segments of Syrian society, abusing the dignity of civilians, including children, through degrading treatment such as torture, rape and forced recruitment. According to documented estimates, as of 20 October 2013, the number of displaced Syrian children amounted to approximately 1.6 million. By 2015, the number of children among Syrian refugees rose to nearly 3 million. This dramatic rise in the number of displaced persons demonstrates the brutality faced by children, overwhelmingly at the hand of pro-government forces, reflecting at the same time the Assad regime’s involvement in serious violations of international humanitarian law.

The crimes of the Syrian government were reflected in UN Security Council Resolution 2165 (2014), in which member states expressed “grave alarm in particular at the continuing indiscriminate attacks in populated areas, including the intensified campaign of aerial bombings and the use of barrel bombs in Aleppo and other areas, artillery, shelling and air strikes, and the widespread use of torture, ill-treatment, sexual and gender-based violence, as well as all grave violations and abuses committed against children.”

In November 2018, UN Secretary-General Antonio Guterres, in his second report on children and conflict in Syria, which he submitted to the UN Security Council, confirmed that 3,891 children have been killed and 3,348 others have been maimed in Syria over the past five years.

Guterres accused the Syrian government and armed groups of blatantly ignoring the lives and basic rights of children. Over the period 16 November 2013–30 June 2018, the UN verified more than 12,500 serious violations against children. It was confirmed that 3,891 children were killed and 3,448 others maimed, indicating a significant and sustained increase in the past five years. The UN acknowledged it believed the scale of casualties is higher than the number able to be verified.

According to the UN report, some children were injured by “inherently indiscriminate or disproportionate weapons or unlawful weapons, such as barrel bombs, cluster munitions and toxic chemical agents.” Other children also faced horrific deaths by stoning, crucifixion or other brutal tactics. Other children faced abductions (693 cases verified) and sexual violence (98 verified cases).

The report also mentioned attacks on schools and hospitals, the conversion of these facilities for military use, and the significant impact on the availability of basic medical and educational services. The denial of access to humanitarian aid became a military tactic, especially during the siege of entire communities for months and sometimes years. More than 2,000 of the verified violations occurred in besieged areas.

These crimes, which were stipulated by the UN Security Council and documented by international investigators and human rights organizations, amount to crimes against humanity and war crimes. In response to the crimes committed against Syria’s children, the international community must hold to account Bashar al-Assad, as the commander-in-chief of the armed forces, and all those responsible for ordering and carrying out these violations, including Syria’s military commanders and heads of security services.