He said the political process so far has not yet delivered any real changes in Syrians' lives, nor a real vision for the future. 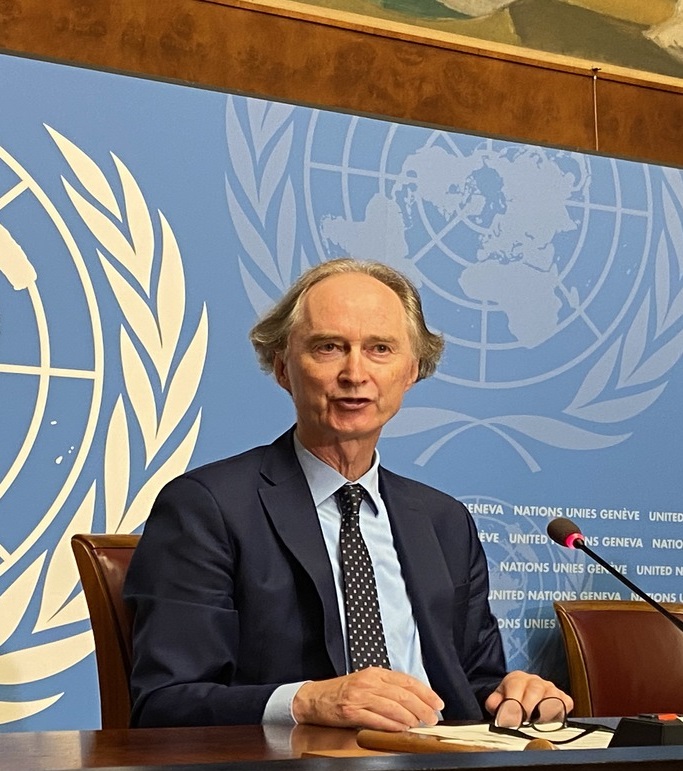 The UN Special Envoy on Syria said Friday that issues to be discussed in a new round of political talks could not be sorted out by Syrians alone and that they also needed international cooperation, Anadolu Agency reported.

At a hybrid Geneva press conference, Geir Pedersen said that the fifth round of talks of the Syrian Constitutional Committee aimed at a final peaceful solution in the war-torn country would start in Geneva on Monday.

The UN envoy noted: “We have seen, of course, a relative calm since March, when we had the agreement between Russia and Turkey for the Northwest [Idlib]. But as I’ve emphasized, this is a fragile calm.

“All of these issues cannot be sorted out by the Syrians alone. It needs international cooperation,” said Pedersen.

He said he had briefed the UN Security Council in New York on Wednesday, describing the coming meetings that start Monday as “very important.”

The world had seen violations of Syrian sovereignty and territorial integrity going on for years, said the UN envoy, adding: “We have seen economic hardship as a consequence of 10 years of conflict, and internal factors, but also external factors.”

“Although grappling with extreme economic challenges and on top of it, the challenge of COVID-19 for many Syrians, the daily struggle just to survive crowds of most other issues,” said the UN envoy.

He said the political process so far has not yet delivered any real changes in Syrians’ lives, nor a real vision for the future.

“As I emphasised many times, it is now clear that no one actor or group of actors can impose their will on Syria or settle the conflict alone. They must work together.”

Pedersen said he had not yet come in touch with the new US administration sworn in on Wednesday.

“But I’m very much looking forward to having an intensive and good dialogue hopefully also with the new American administration.”

The UN envoy said those taking part in Monday’s talks would begin arriving in Geneva on Saturday.

Hadi al-Bahra is heading the opposition and Ahmad Kuzbari is representing the Syrian regime.

In December, Pedersen said that after 10 years of conflict, it was not surprising that the process is slow-going and arduous.

Syria has been embroiled in a vicious civil war since early 2011, when the Bashar al-Assad regime cracked down on pro-democracy protests with unexpected ferocity.

More than 5 million civilians have since been displaced.