19,192 Civilians Killed and 34,982 Others Arrested During the Months of Ramadan in the Last Ten Years

The Syrian Regime and Its Iranian and Russian Allies Are Responsible for 86% of the Total Killings. 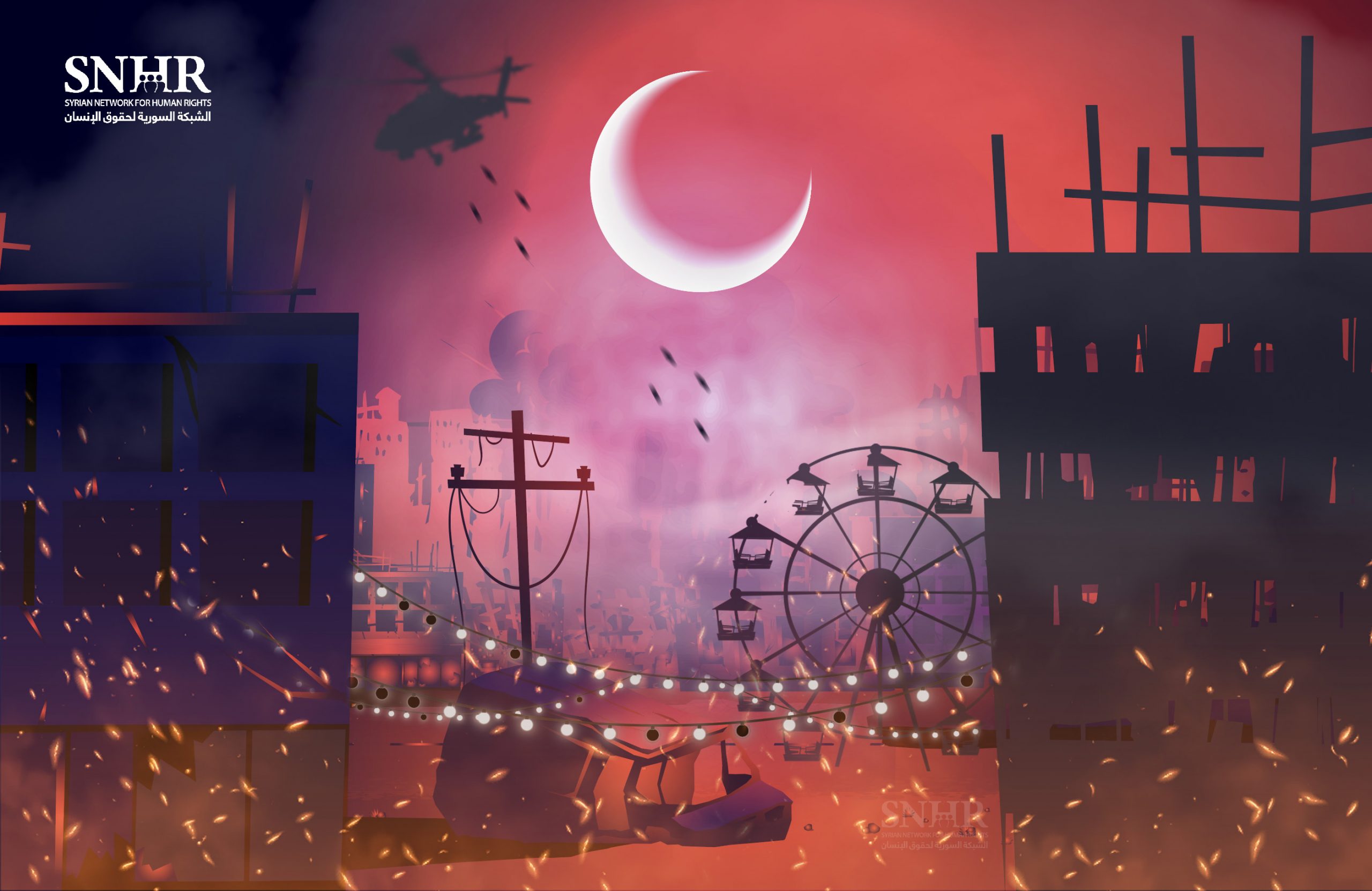 Paris – The Syrian Network for Human Rights (SNHR) reveals in its report released today that it documented the deaths of 19,192 civilians and the arrest of 34,982 others during the months of Ramadan in the last ten years, noting that the Syrian regime and its Iranian and Russian allies are responsible for 86% of the total killings.

The 23-page report notes that international law stipulates the need for respect of religious freedoms and rituals, adding that all the parties to the conflict in Syria should have respected the sanctity of the month of Ramadan, given its unique status as a holy month for Muslims around the world, and should accordingly either reduce or suspend their violations during this period, most especially in the cases of the Syrian regime and its Russian allies. The report adds that, despite this, in the 10 years that have now passed since the outbreak of the popular uprising calling for freedom and democracy in March 2011, the Syrian people have been subjected to the most atrocious violations during the months of Ramadan throughout this decade, adding that the impact of bombardment, arrest, torture and various types of violations is more psychologically and emotionally traumatizing during a month considered sacred by the majority of the Syrian people. The report addresses extrajudicial killings, torture, arbitrary arrests, and enforced disappearances that SNHR documented during the months of Ramadan in the past ten years. The report further adds that expressing these violations in statistical form gives some sense of the terrible magnitude of the violations that occurred, including bombardment of civilian objects, including vital facilities, as well as forced displacements.

The report adds that the Syrian regime has far surpassed all the other parties to the conflict being responsible for approximately 84% of the death toll among those whose deaths SNHR documented in the months of Ramadan since 2011, followed by ISIS who were responsible for approximately 6%. The report also provides charts that showed the distribution of the death toll by years, and across governorates as well. Analysis of the data shows that the month of Ramadan 1433 AH corresponding to July 21 to August 18, 2012, saw the highest death toll documented during any individual Ramadan period in this decade, with 35% of the death toll, showing also that the Syrian regime was almost the sole perpetrator that year in killing civilians during Ramadan 1433 AH.

As the report concludes, the Syrian regime and the other parties to the conflict have flagrantly violated a number of fundamental principles of international human rights law, such as the right to life, non-enforced disappearance, non-torture, and a large number of rules of customary humanitarian law and Common Article 3 of the four Geneva Conventions of 1949.
In addition, extrajudicial killings, enforced disappearances and torture practiced by the Syrian regime in the various Syrian governorates, and in connection with the detainees’ participation in the popular uprising against the regime, constitute a pattern of widespread attack and amount to crimes against humanity under Article 7 of the Rome Statute.
The report adds that the Syrian regime’s government has not only violated international humanitarian law and customary law, but has also breached a number of UN Security Council resolutions, particularly resolution 2139, resolution 2042 on the release of detainees, and resolution 2254, all without any accountability, with the breaches of these resolutions continuing to date.

The report calls on the UN Security Council to take additional steps following its adoption of Resolution 2254, which clearly insists that “all parties immediately cease any attacks against civilians and civilian objects as such,” and to refer the Syrian issue to the International Criminal Court, adding that all those who are responsible for violations should be held accountable. The report further emphasizes that there will be no stability in Syria without first achieving a real political transition towards democracy in the country within a specific timetable, and this will only be achieved through the imposition of various pressures, mainly on the Syrian regime and its allies, because it will not give up power voluntarily.

The report also calls on the international community to renew pressure on the Security Council to refer the case in Syria to the International Criminal Court, to work on fulfilling justice and achieving accountability in Syria through the United Nations General Assembly and the Human Rights Council, and to work on activating the principle of universal jurisdiction, with the report providing a set of additional recommendations.