The brutality of ISIS continues to be felt by the survivors, especially those in Syria and Iraq whose family members were disappeared by ISIS and who remain missing. 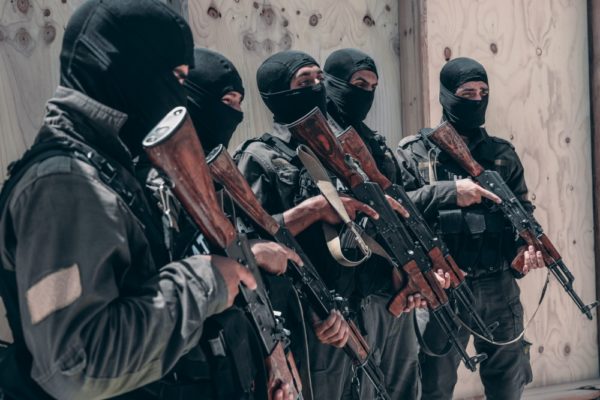 One of the most vexing challenges faced in northeast Syria is what to do with some 10,000 ISIS fighters as well as 60,000 women and children left behind after the territorial defeat of ISIS. These individuals are detained in a network of prisons and camps run by the Syrian Democratic Forces (SDF) under the political leadership of the Syrian Democratic Council (SDC) with some financial support from the United States and other governments. The overcrowded and inhumane conditions in the prisons and camps – with no solution in sight – have created enormous strain on the SDF and fomented tension. Given the size of the problem, there is an immediate need to triage a coordinated response to different detained groups, identifying the most pressing circumstances to be addressed first.

The most significant threat to security and stability are the 2,000 foreign fighters held by the SDF. This should be the first priority of the international community. For this unique problem, the international community should create a treaty-based terrorism court in collaboration with the Kurdistan Regional Government in Iraq (KRG) with arrangements to transfer convicted fighters to their home countries to serve their sentences.

There are at least 58 States with ISIS foreign fighters in SDF jails. Through a multilateral treaty, these States could pool their jurisdiction to form a tribunal to prosecute fighters for terrorism-related crimes. Jurisdiction may be granted for crimes committed abroad based on the active personality principle, whereby most domestic systems permit the prosecution of their own nationals for terrorism crimes. Crimes committed by these perpetrators – be it in Syria, Iraq, or elsewhere – would be within the jurisdiction of the court. The historical antecedent to this legal strategy is the London Agreement between the allied powers following WWII to prosecute Nazi leadership at Nuremberg. Due process rights would be guaranteed in the charter to the new tribunal, which would exclude the death penalty as inconsistent with international human rights standards.

The most appropriate locus for the tribunal would be in KRG-Iraq as it was part of the territory controlled by ISIS. Victims and witnesses are located in the region and the area is relatively stable. Although trials would ideally be located where crimes occurred and where the detainees are now located, the SDC does not have legal personality to enter into international agreements. The Syrian government is not cooperating with efforts for international justice, and distrust between it and the SDF would not permit effective cooperation. There is political tension between the SDC and the KRG that would need to be resolved. But addressing this issue of mutual concern could be a basis for creating stronger relations, particularly if both entities are supported by the international community.

The subject-matter jurisdiction should be restricted to terrorism-related offenses for which the full-range of penalties remain available up to and including life-imprisonment. Prosecution might also include sexual and gender-based violence. For example, Iraqi criminal law defines terrorism as “any criminal act” with terrorist intent. This could encompass SGBV, kidnapping and other crimes with specific intent. By limiting jurisdiction to these crimes, it would obviate the need to examine the contextual elements of crimes against humanity, war crimes, and genocide, which present resource-intensive and time-consuming issues. Of the foreign fighters, those most responsible for these international crimes, or those whose victims are foreign nationals, could still be prosecuted for atrocity crimes in their home jurisdictions. Indeed, it is important that the Yazidi genocide be recognized, and those most responsible for those crimes should be punished, either in regular Iraqi courts or pursuant to universal jurisdiction in other states.

A question arises as to the applicable substantive criminal law given that the foreign fighters are from over 50 different States. Whether Syrian, Iraqi or international law, the decision of which definitions of crimes will be applied must take into account the principle of legality, meaning that the crimes must be clearly defined prior to the alleged offenses and the accused must have been on notice of those prohibitions

Criminal procedures may follow those established by the KRG (Criminal Procedure Code 23 of 1971 Kurdistan region of Iraq (as amended to 14 February 2010). This would obviate the need to draft and approve unique rules of procedure and evidence and would follow the example of the Khmer Rouge Tribunal, which adopted Cambodian law for its rules of procedure. Although this arrangement is unconventional, it is not unprecedented. The Lockerbie criminal trial for the terrorist bombing of Pan Am Flight 103 took place in the Netherlands, but applied Scottish criminal procedure.

Other practical concerns include the large caseload and funding. International tribunals are unaccustomed to prosecuting a large number of accused persons. Indeed, they are designed to prosecute senior leaders and those most responsible for atrocity crimes. For example, the ICTY indicted 161 individuals. A more appropriate model might be prosecutions for piracy (a sister crime of terrorism). A decade ago, pirate attacks off the coast of Somalia skyrocketed. Hundreds of pirates were captured by international navies patrolling the area. In a program coordinated by the United Nations Office on Drugs and Crime and approved by the UNSC, specialized anti-piracy courts were designated in several States, which prosecuted over 1,200 pirates with the ultimate goal of transferring them to their home states. This strategy, along with international naval patrols and the use of private security contractors to defend commercial ships, was effective at suppressing piracy and trials were generally considered fair with convicted pirates returned to their homes to serve sentences. See here and here.

As to funding, Iraq is reluctant to bear the entire burden of these prosecutions. It has been reported that Iraq has requested $1 million per prosecution of ISIS foreign fighters. However, a treaty-based terrorism court would not be an Iraqi institution. It would be supported by funding from international donors, which could control the budget and the functioning of the court. A final decision on the most appropriate personnel should be resolved following a decision on the applicable substantive law. It should be noted that courts using one official language (such as the Special Court for Sierra Leone) were much more efficient than courts with two or three languages such as the ICTR or ECCC. The official language of court should be Arabic and staffed with lawyers and judges who speak the language.

Rights of Survivors and the Search for the Missing

The brutality of ISIS continues to be felt by the survivors, especially those in Syria and Iraq whose family members were disappeared by ISIS and who remain missing. ISIS fighters are the single best source of information to obtain information on the missing, including the locations of ISIS prisons and mass graves. Tribunals prosecuting ISIS fighters should provide opportunities to obtain this information during judicial processes. Prosecutors and judges should ask questions of ISIS fighters, and survivors should be permitted to participate in these proceedings through a representative – as permitted by KRG criminal procedure. If the accused choose to remain silent during their substantive trials, they should be asked these questions again prior to sentencing.

Transfer of Prison Sentences – not extradition

Since 2019, despite repeated calls to repatriate foreign fighters, there has been little movement by Western states. This is partly due to a fear that foreign fighters will be acquitted because of a lack of evidence, thus creating a security threat upon their release. A treaty-based court addresses this concern by prosecuting fighters prior to their repatriation. Ultimately, however, they should still be returned to their home countries through the transfer of sentences. The States signing the treaty could sign bilateral or multilateral transfer agreements with the KRG-Iraq to facilitate the return of foreign fighters to their home countries to serve their sentences consistent with human rights law.

In the event of acquittal, a separate system would need to be put in place for reintegration/ rehabilitation in their home countries.

A treaty-based terrorism court for foreign fighters would be unsuitable to prosecute the remaining 8,000 ISIS fighters in SDF jails who are either Iraqi or Syrian. These individuals should be prosecuted in their home jurisdictions under pre-existing law and regular judicial processes.

Syria prosecutions should proceed against Syrian fighters in the SDC’s courts in northeast Syria pursuant to Syrian law. These courts will require international assistance to bring them into compliance with relevant human rights law. The international community should provide support in the form of infrastructure and expertise. As USAID contemplates reinitiating efforts to rebuild infrastructure in northeast Syria, it should consider a program to support the judiciary and criminal justice sector, including prison infrastructure and a program for rehabilitation and reintegration of ISIS fighters.

Iraqi members of ISIS should be extradited for trial in Iraq, which should also be financially supported by the international community. However, the international community should not become complicit in human rights abuses. The UNSG should seek diplomatic reassurances that the maximum penalty imposed will be life imprisonment and that basic due process will be respected, including the right to a defense and a fair trial. International trial monitors should be present to ensure due process is respected.

The prosecution of foreign ISIS fighters in a treaty-based tribunal and the prosecution of Iraqi and Syrian ISIS fighters in their home countries will not remedy the situation of women and children remaining in camps in northeast Syria. Some of these women are responsible for crimes and should be prosecuted. The treaty-based court could be seized of these cases, although there will need to be special provisions to ensure the courts are equipped to address female detainees. This would add serious complications, and prosecution of men detained in SDF jails might need to be prioritized.

The prosecution of ISIS fighters should not be confused with holistic justice for Syria. The Syrian government is the single largest perpetrator of atrocity crimes during the 10-year-long conflict, and it must not be permitted to enjoy impunity. Justice is already proceeding in a piecemeal fashion through universal jurisdiction prosecutions in Germany, France, and elsewhere, and there is some hope that Syrian senior leaders will one day be held to account. But this should not prevent the international community from addressing the continuing national security and human rights emergency posed by the 10,000 ISIS fighters languishing in poorly resourced SDF prisons. To be sure, the challenges are significant but not insurmountable.