In August 2020 : A journalist killed, and the number of violations increased

HTS detained the American journalist Bilal Abdul Karim in the northern countryside of Idlib, without explaining the reasons. He is still detained until the date of publication of this report. 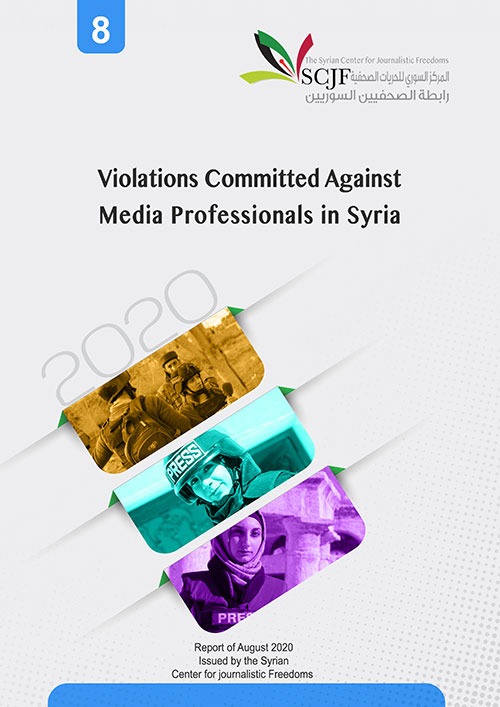 Source: The Syrian Center for Journalistic Freedom in the Syrian

The increase of violations against the media in Syria in August was accompanied by new changes in their types. For the first time this year, SCJF documents three violations against media outlets, which constitute a new escalation in the tightening of the screws on media freedoms in Syria.

Perhaps the most prominent explanation for this rise and diversity in violations is the continuation of the various conflicting parties on the Syrian soil, to pressure and restrict media freedoms, which were also among the main causes of the violations documented during the past months of this year, especially with the decrease in the pace of battles and bombing.

The Syrian Center for Journalistic Freedom (SCJF) in the Syrian Journalists Association (SJA) documented eleven violations against the media in August, similar to what was documented in June and February, and a significant decrease from what the center documented in the rest of this year.

Last month, SCJF documented the killing of a journalist and the arrest and detention of 6 other media professionals. An unknown armed group assassinated the journalist Rami Al-Khatib in Daraa, without further details about the causes and motives. This brings the number of media professionals killed since mid-March 2011 to 458.

HTS detained the American journalist Bilal Abdul Karim in the northern countryside of Idlib, without explaining the reasons. He is still detained until the date of publication of this report.

The Autonomous Administration forces of the Democratic Union Party (PYD) detained the media professionals Rankin Sheru, Fahd Sabri, and Anas Abu Zaid, for two hours, under the pretext of filming without permission in the city of Qamishli, northeastern Syria.

Moreover, the authorities of the Syrian regime arrested the journalist Reda Al-Basha in Aleppo without explaining the reasons until they released him after two days. It also arrested Walid Jadu al-Rifai, known as Abu al-Nour, in the eastern countryside of Daraa. His fate remains unknown until the date of publication of this report.

In the same context, the Military Court of the Syrian opposition in the city of Afrin in the northern countryside of Aleppo issued a decision by which it sentenced Mahmoud Muhammad Khair Fawaz, known as Mahmoud al-Dimashqi, to imprisonment for criticizing the Syrian National Army on social media.

The Media Relations Office of the Salvation Government of the HTS issued a decision prohibiting media professional from dealing with Al-Aan TV, Step News Agency, and Al-Youm TV in its territory in Idlib without clarifying the decision.

The fate of Austin Tice revealed

The case of American journalist Austin Tice was raised again, after new statements last month by the Tice family. They confirmed that their son, who was kidnapped in Syria eight years ago, is still alive and detained in the prisons of the Syrian regime.