May 2020 Report on the Security Situation in Syria

the armed conflict in Syria and the security situation throughout Syria during 2019 and the first two months of 2020, particularly analyzing the nature of the violence and its impact on civilians 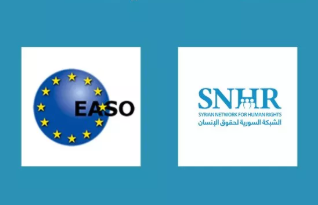 On Tuesday, May 5, 2020, the European Asylum Support Office (EASO) released a report on the security situation in Syria to assess international protection and the situation of refugees.

The report relies on several human rights sources, including most notably, in order of the number of quotes:

The report is divided into two main parts; the first of which focuses on political developments, an overview of the armed conflict in Syria and the security situation throughout Syria during 2019 and the first two months of 2020, particularly analyzing the nature of the violence and its impact on civilians.

The report begins by talking about the political developments in the armed conflict in Syria, before moving on to talk about the changing areas of control under the parties to the conflict, referring to the government forces regaining control of most of the country, including the major cities (Damascus, Aleppo, Homs, and Hama) and most of the governorate capitals. The report notes that although government forces regained control of most of the opposition’s areas of control with the support of its Russian and Iranian allies, government control outside Damascus is considered tenuous, in part because the regime lacks the forces to secure the areas it retakes, and also because it pursues punitive policies against the local populations. The report adds that the conflict weakened the ability of government forces to maintain security control over the areas after regaining control of them, which has led to it outsourcing these efforts to multiple groups in the form of pro-regime paramilitaries, foreign powers, and local militias.

The report also notes that clashes between pro-government militia factions have occurred frequently throughout the armed conflict with the aim of gaining access to and control over territories, with the report suggesting that the main driver of this is the crimes committed by these gang factions (confiscating property, corruption, gun-smuggling, drug-smuggling, kidnapping, extortion and committing other violations against civilians). The report also indicates that there have been civilian casualties due to these clashes in the governorates of Aleppo, Homs and Hama.