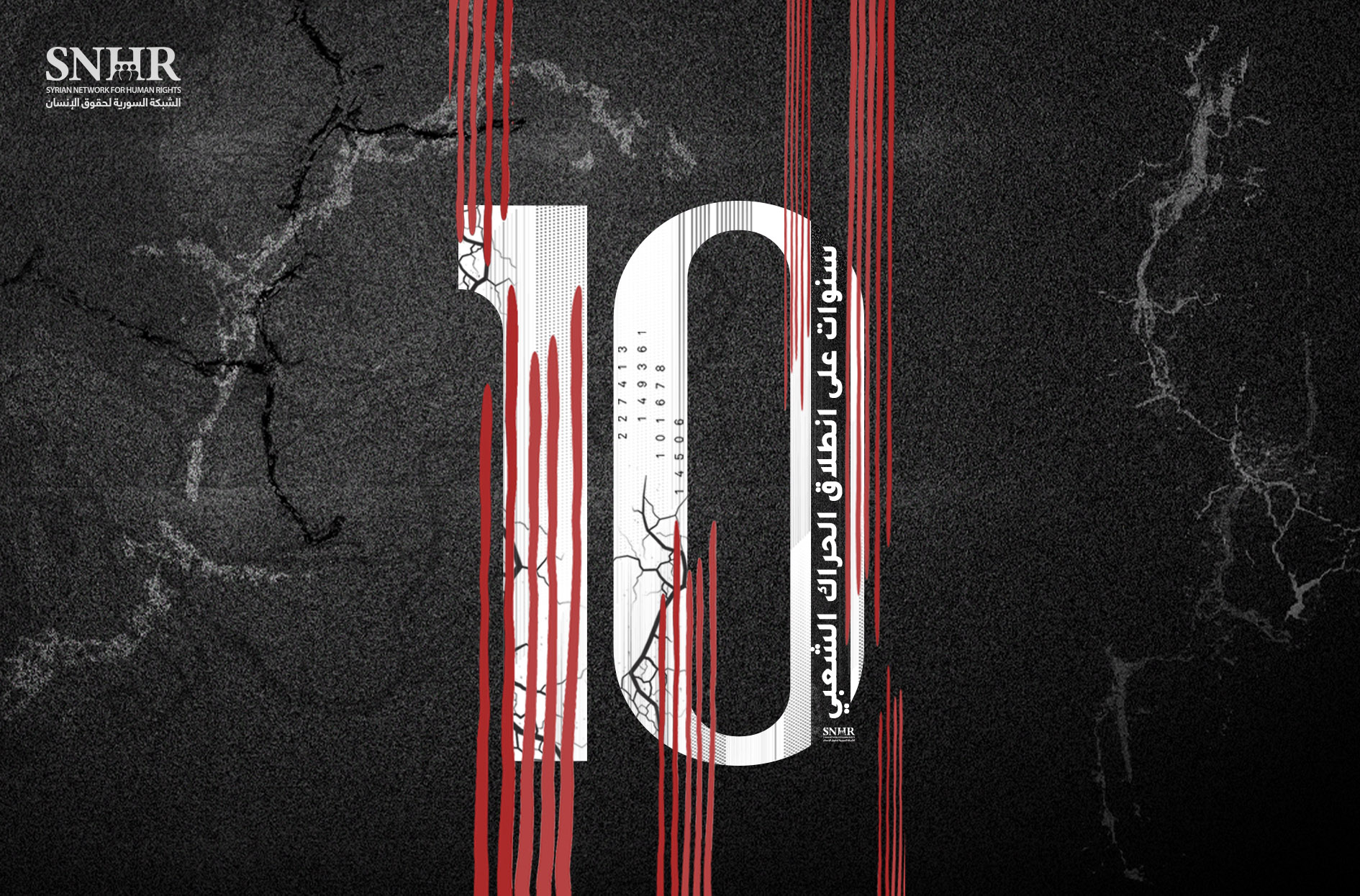 Paris – The Syrian Network for Human Rights (SNHR) reveals in a report released today marking the 10th anniversary of the popular uprising in Syria that it has documented the deaths of 227,413 Syrian civilians, including 14,506 by torture, with 149,361 detained/ forcibly disappeared, and 13 million others displaced, noting that it’s been a decade of continuous violations and a failure to achieve a political transition towards democracy and human rights.

The 30-page report recalls that the Syrian people first rose up in 2011 to demand freedom from tyranny and to reclaim their long-withheld dignity, which had been crushed under the Syrian regime’s brutal security services. These calls for freedom and dignity were potent political slogans, as well as demands for the fundamental human rights which are the right of all peoples, including freedom of opinion, expression and peaceful protest. The Syrian regime’s instinctive reaction, however, was to confront and crush the protests using the security services, directing them to inflict horrendous levels of violence against unarmed protesters that included shooting live bullets, and carrying out killings and arrests which are more like kidnappings, to terrorize the rest of Syrian society into submission and to deter those in other areas from joining the popular uprising against it, wanting to crush the uprising as fast as possible.
The report adds that the Syrian regime continued to commit violations, killings and arbitrary arrests in parallel with the growth of the popular uprising, which led protesters, nearly a month later, to increase the level of their initial calls for freedom and dignity to demanding the fall of the regime. As the report notes, at least 277 civilians were killed, and 1,437 others were arrested, during the first month of the popular uprising, between March 15, 2011, and April 15, 2011 (the day of the Great Friday protests).

As the report further notes, up until the end of 2011, the popular uprising had not yet turned into an internal armed conflict, nor had other parties emerged, but the failure of the UN Security Council and the international community to protect civilians over all these months, acted as a green light for the Syrian regime to continue committing a vast range of violations, which amounted to crimes against humanity.

“The popular uprising against the Syrian regime is the only way to achieve a political transition in Syria. Under the regime’s brutal security services, the lack of freedom of opinion and the press, and the executive power’s encroachment upon the judicial and legislative powers, no one would dare to stand as a serious candidate for leadership in competition with Bashar al Assad, and if that happened, no one would dare to elect him/her, with the al Ba’ath Party being no more than a bogus façade that will not nominate anyone else from among its members which it claims number in the millions. In this situation, the Assad family, which has ruled Syria completely and autocratically since 1970, will remain in power and will continue to treat Syria’s leadership as a hereditary ‘right’, ruling through oppressive authoritarian tyranny via an extensive network of economic mafias associated with the regime. The popular uprising is the only way to break the Assad family’s monopoly and achieve a long-denied shift towards democracy.”

In marking the 10th anniversary of the popular uprising for democracy, the report outlines some key points and events during the past decade in Syria, as well as updating the record of the most notable human rights violations documented on SNHR’s database to show the terrible extent of the human and material losses suffered by the Syrian people solely because they demanded that their nation move forward from being a hereditary authoritarian dictatorship to being a modern, democratic, pluralistic country.

As the report notes, three major political processes emerged during the past ten years, namely the Arab League initiative, the Geneva initiative, the Astana/ Sochi initiative; while all went through many stages, however, none of them reached even the threshold of negotiations, or achieved any serious progress towards forming a transitional governing body and beginning along the road to political transition and transitional justice. The report provides a brief overview of each of the three initiatives, including the civilian death toll and the record of arrests/ disappearances that were documented in conjunction with each political initiative.

The report adds that there had been a significant change in areas of control over the past ten years according to military developments; the report includes ten detailed maps showing the significant changes in the locations that the perpetrator parties controlled from one year to the next, starting from March 2011, noting that the Air Force played a pivotal role every year, causing between 70% and 75% of the total killings and destruction, and the resulting displacement.

The report further notes that the UN Security Council has failed in implementing 26 of the resolutions it issued in regard to Syria, adding that Russia delayed the issuance of any Security Council resolution until more than a year after the popular uprising first began; the report affirms that the Syrian regime has neither complied with nor implemented any of these resolutions to date, including those related to the use of chemical weapons, which stated that in the event of such weapons’ repeated use, the Security Council would take measures under Chapter VII. Apart from drafting political transition resolutions, no serious step towards a political transition has been achieved since the Geneva Communiqué of 2012. The report notes that the Security Council’s failure has not been limited to its failure to implement its own resolutions, but also extended to allowing the arbitrary uses of the UN veto by both Russia and China, all of which worked in favor of providing impunity for the Syrian regime, enabling it to escalate its use of violence, including the use of chemical weapons, and to impede the political transition thus far.

As the report reveals, the Syrian regime’s helicopters and fixed-wing warplanes have dropped nearly 81,916 barrel bombs since these weapons’ first documented use on July 18, 2012, up until March 2021, causing the deaths of 11,087 civilians, including 1,821 children and 1,780 women.

The report also documents at least 222 chemical attacks in Syria since the first documented use of this weapon on December 23, 2012, distributed to 217 chemical attacks carried out by Syrian regime forces in various Syrian governorates, and five chemical attacks carried out by ISIS in Aleppo governorate.
The report outlines the distribution of these attacks according to the related Security Council resolutions, adding that these attacks resulted in the deaths of 1,510 individuals, and the injury of 11,212 others.
The report reveals that at least 494 cluster munition attacks have been documented in Syria at the hands of Syrian-Russian alliance forces since the first documented use of these munitions in July 2012. The report also documents at least 171 attacks using incendiary weapons on civilian residential since March 2011, 41 of which were at the hands of Syrian regime forces, 125 attacks at the hands of Russian forces, while US-led Coalition forces carried out five attacks against residential neighborhoods in Raqqa city.

The report documents at least 863 attacks on medical facilities and 1,393 attacks on places of worship, since March 2011, as well as recording damage to 1,584 schools, some of which were subjected to more than one attack. The report adds that the Syrian-Russian-Iranian alliance is responsible for nearly 89% of the record of these incidents.

As the report notes, the various types of violations, mainly those previously mentioned, have contributed to generating a state of terror and fear among Syrians, forcing them into displacement and desperately seeking safety and refuge; the United Nations High Commissioner for Refugees (UNHCR) estimates that nearly 13 million Syrians are now either internally displaced or refugees; nearly six million are internally displaced persons (IDPs), some of whom were displaced more than once; and nearly seven million are refugees, the vast majority of whom are in neighboring countries.
The establishment of internal refugee camps began to emerge in 2012, with these camps quickly spreading across vast areas in regions outside the control of the regime forces; with the regime recapturing more territory, the areas free of its control have gradually shrunk, with the camps now limited to the Idlib region in northwest Syria, as well as in northeastern Syria, and the al Tanf region (al Rukban camp). The camps generally suffer from a lack of infrastructure and of humanitarian and medical aid, due to the vast numbers of IDPs, of whom more than 98% are unable to return to their homes, with the COVID-19 pandemic exacerbating their misery.

As for the accountability process, the report briefly outlines the most notable actions taken by the world’s states and the United Nations in this context, stressing that impunity remains the overwhelming condition in Syria, and the perpetrators of the violations continue to practice them up to the current date; this further underlines the need for more sanctions and urgent measures to deter the perpetrators of violations, stop crimes against humanity, and hold the high-ranking decision-maker officials accountable.

As the report notes, the states whose representatives attended the 2005 World Summit unanimously affirmed their responsibility to protect their own populations from crimes against humanity and war crimes. This responsibility entails the prevention of such crimes, the prevention of incitement to commit them by all possible means, and when the state clearly fails to protect its population from atrocity crimes, or itself is committing such crimes as in the case of the Syrian regime, means that it is the responsibility of the international community to intervene to take protective measures in a collective, decisive and timely manner.

All parties to the conflict in Syria have violated both international humanitarian law and international human rights law, with the Syrian regime and its allies being the perpetrators of by far the largest number of violations, as well as abdicating its responsibility to protect the Syrian people and the state for which it is responsible before the United Nations.

The report recommends that the members of the Security Council must stop using their veto to protect the Syrian regime, which has committed hundreds of thousands of violations over the past ten years, many of which constitute crimes against humanity and war crimes. The report calls on the Security Council and the United Nations to refer the Syrian issue to the International Criminal Court and hold all those involved accountable, to ensure the establishment of peace and security and the implementation of the principle of the Responsibility to Protect civilians and save Syrians’ lives, heritage and cultural artefacts from destruction, pillage and vandalism, as well as to provide real support for political transition within a specific timetable.
The report calls on the international community to immediately intervene to protect civilians after all their unimaginable losses and suffering, as the Syrian regime has not only failed to protect citizens for ten years to date, but has been by far the most prolific perpetrator of every kind of crime.

The report also calls on the international community to put real pressure on Russia and Iran, to categorize them as key partners in the violations committed in Syria since they continue to supply the Syrian regime with weapons, as well as due to their direct involvement in thousands of violations against Syrian citizens, to stop any forcible return of Syrian refugees, since the situation in Syria continues to be unsafe, to put pressure to achieve a political transition that would ensure the automatic return of millions of refugees, and to provide various forms of support to survivors and victims’ families, especially women and children.

The report urges the parties to the conflict to comply with the rules of customary humanitarian law and Security Council resolutions, to ensure that civilians are treated as neutral, to secure the release of detainees and hostages, to stop torture, to reveal the fate of the disappeared and missing persons, and to respect the principles of international human rights law in the areas under their control, in addition to making several more recommendations.