A nurse in charge of the Tadmur medical point, Shukri Shihab, told SJAC that there were many cases of newborns dying due to the lack of incubators and oxygen cylinders. Resuscitations are almost impossible, he said 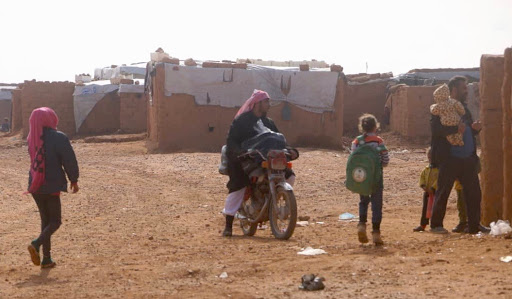 Close to 10,000 civilians are living under wretched humanitarian conditions in the Rukban camp, located in a desert region in Badiyat Homs near the Jordanian-Syrian border, with infrastructure unfit for human life. Many of these civilians live with children who were born inside the camp; children who experience total isolation from life outside the camp and who are without legal documents. To date, the United Nations is still unable to find solutions to deliver humanitarian aid and medical supplies to Rukban. Many residents of the camp suffer from a shortage of food and the spread of disease. The most basic medical supplies and medicine are lacking. Even education is limited. SJAC sources in the camp say that there are only a few informal schools, all run by volunteers.

Civilians in Rukban are suffering from systematic starvation, engineered by the Syrian and Russian forces, in order to push civilians to return to areas under the control of the Syrian government. The situation has worsened since the Jordanian authorities closed the border in 2016. Additionally, the sole UN medical point, called Awn point, was recently closed as a precautionary measure to counter the outbreak of COVID-19. The Awn point was previously used as a crossing for all critical and sensitive health cases, including Caesarean delivery births, to receive treatment at Jordanian hospitals. These patients are now forced to risk treatment in government-controlled areas.  SJAC held a number of telephone interviews with individuals at the Rukban camp, including residents, activists, and people in charge of the medical points in order to understand the deteriorating conditions and the threat of arrest waiting those who choose to return.

The bleak medical situation in Rukban

Since the camp was set up, the medical situation inside has been disastrous. Tadmur medical point is a  basic dispensary within the camp that can provide some painkillers and other first aid items. SJAC obtained a number of photos and videos showing surgeries being conducted with industrial tools that are suitable only for use at mechanic shops. These operations were carried out by individuals who do not have medical degrees.

A nurse in charge of the Tadmur medical point, Shukri Shihab, told SJAC that there were many cases of newborns dying due to the lack of incubators and oxygen cylinders. Resuscitations are almost impossible, he said. People suffering from asthma are most vulnerable, due to the desert environment and poor infrastructure.

“After the closing of Awn point on the Syrian-Jordanian border, critical health cases became frightening as it forces patients to access the only other option for medical assistance: leaving the camp and returning to the areas under the control of the Syrian government, putting the civilians at risk,” Shihab told SJAC. Both Ghali and Shihab spoke to SJAC about several difficult and sensitive cases, including one patient who used to go through the Awn medical point to Jordanian hospitals every week to receive dialysis treatment but is facing the prospect of death after the closure of the Awn medical point.

This situation has also forced a number of pregnant women who are due to give birth and require a C-section to return to Syrian government-controlled areas to have their operations. They were returned to “shelter centers,” which are essentially detention facilities, in the government-held areas and are prevented by Syrian security forces from returning to their families at the camp. Additional information was received via social media, which SJAC could not confirm, that the women were made to sign a paper stating that they pledge not to return to the camp in exchange for having the C-section.

Humanitarian aid in a camp under siege

The medicine and humanitarian aid that reaches the camp, mostly by smugglers entering through government checkpoints, is costly and scarce. Any person who is caught smuggling medicine faces a severe penalty, which has caused prices to skyrocket and aggravates the difficult humanitarian conditions. Traders inside the camp then exploit the situation by monopolizing the aid and increasing prices.

Humanitarian assistance has only been offered through UN convoys in the years since the camp’s creation. Shihab and Ghali said that the Syrian Arab Red Crescent (SARC) has not offered any assistance, and that camp residents are aware that SARC is an entity affiliated with the Syrian government. “We only saw [SARC] in February 2019 as they entered the camp and gave the residents a questionnaire to see who wishes to leave the camp and return to the areas of the Syrian government and who wants to go to northern Syria,” Ghali said, adding that the answers in the questionnaire were falsified to show differing responses.

The Syrian government and Russian forces’ siege of the camp is deliberately starving thousands of displaced persons to force them to leave the camp and return to government-held areas in Syria. The Russian forces facilitated two “humanitarian corridors” in 2019 for civilians to enter Syria from Rukban and gave promises about guaranteeing the safety of the returnees. However, the Syrian government and their Russian allies did not abide by this.

The widespread arrests and violations against Syrians returning to reconciled areas has been widely reported, and information collected by SJAC from activists at the Rukban camp suggest camp returnees face similar danger. SJAC found that many of the returnees were first sent to shelter centers, then to security branches (including the Military Police Branch in the Qaboun quarter of Damascus), and then either to the Syrian Counter-Terrorism Court or to Sednaya prison. Some civilians were sent to the Adra Central Prison outside of Damascus to serve a sentence of one-to-two years. SJAC obtained information detailing that 133 civilians from Rukban have been arrested since returning to government-controlled territory. Some returnees were also sent to complete their compulsory military service.

Based on the interviews conducted by SJAC’s documenters with Rukban residents, the residents feel that despite the difficult conditions, staying at the camp is a better option than risking arrest by the Syrian government forces or compulsory military service.

SJAC is greatly concerned about the serious humanitarian conditions of the residents of Rukban camp and the fate of the returnees to areas under the control of the Syrian government. The siege and starvation of the civilians living in Rukban is a violation of international humanitarian law. The United Nations and the United Nations Special Envoy for Syria must demand the Syrian government and Russia allow relief and humanitarian aid convoys access to the camp without conditions or hindrance and facilitate the transfer of patients and sensitive and critical cases to Jordan to receive treatment. The Jordanian government must urgently allow relief assistance unrestricted access to the camp.

Individuals who have left the camp and entered Syrian government territory for medical assistance, including women who entered to have C-sections, must be allowed to reunite with their families in Rukban. Additionally, the fate of persons arrested after returning to areas under the control of the Syrian government must be revealed, and any returnees held in detention must be immediately released.

Additionally, with the Brussels IV Conference on Syria set to take place next week, the issue of Rukban should be at the forefront for donors and the international community. The important issues of opening border crossings and allowing for equitable aid access to reach civilians in Syria also includes those in Rukban, where aid is not entering and residents are currently living without sufficient medical support. Donors must make pledges to support Rukban and ensure plans are made to include the camp in any conversations around border crossings, aid, and displaced persons.