The Most Notable Human Rights Violations in Syria in January 2021 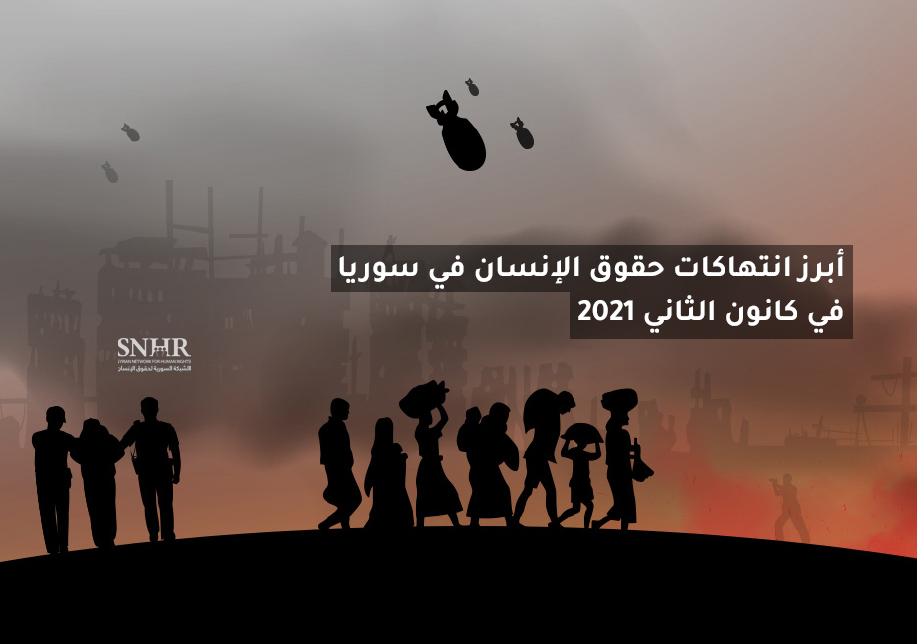 The Syrian Network for Human Rights (SNHR) today released its monthly special report summarizing the human rights situation in Syria, outlining the most notable human rights violations documented by the SNHR in January 2021 at the hands of the parties to the conflict and the controlling forces in Syria, in which it notes that the failure in the Geneva negotiations adds to the inability to stop the egregious violations in Syria.

The 35-page report outlines the most notable violations SNHR documented in January 2021, including the death toll of civilian victims who were killed by the parties to the conflict and the controlling forces, as well as the record of cases of arrest/ detention and enforced disappearances. The report also highlights the attacks on civilian objects which SNHR was able to document during this period.

The report draws upon the ongoing daily monitoring of news and developments, and on an extensive network of relations with various sources, in addition to analyzing a large number of photographs and videos.

The report further documents at least 213 cases of arbitrary arrest/ detention in January at the hands of the parties to the conflict and the controlling forces in Syria, including 24 children and five women, with the largest percentage of these carried out by Syrian Democratic Forces in the governorates of Deir Ez-Zour, then Raqqa.

In addition to these incidents, the report also documents at least nine attacks on vital civilian facilities, five of which were carried out at the hands of Syrian regime forces, which concentrated in Idlib governorate. Among these attacks we documented two on educational facilities (schools and kindergartens) and two on places of worship.

The report further reveals that assassinations continued throughout Syria, particularly in the governorates of Aleppo, Idlib, Daraa and Deir Ez-Zour, killing and injuring dozens of people.
The report adds that the Tal Tamer-Ras al Ein contact line in the suburbs of Hasaka and the vicinity of Ein Eisa city in the suburbs of Raqqa also witnessed intermittent clashes and battles during January between Syrian Democratic Forces and Syrian National Army forces.

On January 24, the fiercest confrontations in two years broke out near Tafas city in the western suburbs of Daraa between opposition factions’ fighters and forces from the Syrian regime’s Fourth Division; the fighting began after the Fourth Division deployed its forces in the vicinity of Tafas city over the previous two days, with the aim of imposing full control over the areas of western Daraa suburbs adjacent to the borders with Jordan and the occupied Golan.

As for the COVID-19 pandemic, the report reveals that the COVID-19 pandemic continues to ravage all Syria’s regions, with dozens of related deaths being recorded daily, amid an almost complete absence of precautionary measures and massive negligence by the different controlling forces, along with the public’s failure to follow these measures due to dire economic and social conditions. In areas under the control of Syrian regime forces, the Syrian regime’s Ministry of Health in January officially announced 2,614 cases of infection and 210 deaths. In northwestern Syria, the Early Warning Alert and Response Network (EWARN) announced the documentation of 727 infections and 55 deaths for January. The report adds that the Health Authority in the Self-Management Authority of Northern and Eastern Syria had announced recording 452 cases of infection and 25 deaths in January in northeastern Syria.

The report refers to the deteriorating living conditions, noting that the repercussions of the economic collapse continue to have a severe negative impact on the lives of citizens in light of the Syrian regime’s mismanagement of the situation which forces the Syrian people to bear the brunt of this collapse. Meanwhile, the villages and towns of al Sh’aitat, al Sh-heil, al Sousa and al Baghouz in the eastern suburbs of Deir Ez-Zour continue to witness many demonstrations calling for improvements in the services and living conditions in the region, and for securing job opportunities for the unemployed.

As the report reveals, the camps in northern Syria witnessed several rainstorms, accompanied by snow on the night of January 20, leading to flooding that submerged or swept away many tents. The report adds that incidents of fires caused by the use of inappropriate heating methods have continued to cause the death of IDPs.
As the report reveals, Tafas city in the western suburbs of Daraa has witnessed a displacement movement since January 27, the first of its kind since the city was subject to a settlement agreement two years ago, with some 10,000 residents (about a third of the city’s population) being displaced due to the threats issued by the Syrian regime’s Fourth Division to launch an attack on the city.
In al Hawl Camp, the report documented in January the deaths of 12 civilians at the hands of unknown gunmen believed to be affiliated with ISIS cells; this is the highest death toll from assassinations by unknown attackers within a one-month period since the camp was established.

The report elaborates on the effects of the COVID-19 pandemic, noting that since the beginning of the global COVID-19 pandemic outbreak, the Syrian regime has dealt with it with callous, total and extreme disregard and absolute negligence. The report also notes that the whole of Syrian society is suffering from mismanagement of the coronavirus crisis, in all areas of control, with the report detailing examples of this. In addition, the report states that all the regions of Syria, particularly Idlib and surrounding areas, that have witnessed bombings, destruction and forced displacement are suffering from further challenges in addition to the usual ones, due to the continuous displacement waves these have witnessed, with exceptional humanitarian aid efforts required to focus particularly on these people in the areas to which they were displaced. The report also reveals that the Syrian regime and its Russian ally are the parties primarily responsible for the targeting, bombing and destruction of most medical facilities in Syria, and for the killing and arrest/ ‘disappearance’ of hundreds of medical personnel, as documented on the SNHR’s database. The report adds that the regime’s failure to release arbitrarily detained individuals, particularly the elderly and individuals detained with no charges, provides further clear evidence of the Syrian regime’s primary responsibility for the spread of the COVID-19 pandemic in Syria, as the regime controls and manages state institutions.

The report further reveals that evidence gathered by SNHR indicates that attacks have been directed against civilians and civilian objects, with Syrian-Russian alliance forces continuing to commit various crimes of extrajudicial killings, arrest, torture, and enforced disappearance. In addition, the indiscriminate attacks they have carried out caused the destruction of various facilities and other buildings. There are reasonable grounds to believe that the war crime of attacking civilians has been committed in many cases.

The report stresses that the Syrian government has violated international humanitarian law and customary law, and a number of UN Security Council resolutions, particularly resolutions 2139 and 2042 concerning the release of detainees, as well as resolution 2254, all without any accountability.

The report adds that the instances of indiscriminate and disproportionate bombardment carried out by the Kurdish-led Syrian Democratic Forces are considered to be in clear violation of international humanitarian law, with such indiscriminate killings amounting to war crimes.

The report calls on the UN Security Council to take additional steps following its adoption of Resolution 2254, and stresses the importance of referring the Syrian case to the International Criminal Court, adding that all those who are responsible should be held accountable including the Russian regime whose involvement in war crimes has been repeatedly proven.
The report also calls on the Security Council to adopt a resolution banning the use of cluster munitions and landmines in Syria, similar to the prohibition on the use of chemical weapons, and to include advice on how to safely remove the remnants of such dangerous weapons.

The report additionally requests that all relevant United Nations agencies make greater efforts to provide food, medical and humanitarian assistance in areas where fighting has ceased, and in internally displaced person camps, and to follow up with those States that have pledged voluntary contributions.

The report calls for the implementation of the ‘Responsibility to Protect’ doctrine after all political channels have proved fruitless through all agreements, the Cessation of Hostilities statements, and Astana agreements that followed, stressing the need to resort to Chapter VII, and to implement the norm of the ‘Responsibility to Protect’ doctrine, which was established by the United Nations General Assembly.
The report recommends that the international community should work to launch projects to create maps revealing the locations of landmines and cluster munitions in all Syrian governorates. This would facilitate the process of removing them and educating the population about their locations.

The report calls on the Independent International Commission of Inquiry (COI) and the International, Impartial, and Independent Mechanism (IIIM) to launch investigations into the cases included in this report and previous reports, and confirms the SNHR’s willingness to cooperate and provide further evidence and data, with the report calling on these bodies to focus on the issue of landmines and cluster munitions within their next report.

The report also calls on the United Nations Special Envoy to Syria to condemn the perpetrators of crimes and massacres and those who were primarily responsible for dooming the de-escalation agreements, to reschedule the peace process so that it can resume its natural course despite Russia’s attempts to divert and distort it, through empowering the Constitutional Committee prior to the establishment of a transitional governing body.

The report also stresses that the Syrian regime must stop the indiscriminate shelling and targeting of residential areas, hospitals, schools and markets, and stop using prohibited munitions and barrel bombs, as well as ending the acts of torture that have caused the deaths of thousands of Syrian citizens in detention centers. The report adds that the Syrian regime must also reveal the fate of 84,000 Syrian citizens previously arrested by the regime’s own security apparatus, whose fate it has concealed to date, and comply with UN Security Council resolutions and customary humanitarian law.

The report stresses that the states supporting Syrian Democratic Forces should apply pressure on these forces in order to compel them to cease all of their violations in all the areas and towns under their control, adding that all forms of support, military and all others, should be ceased unless the SDF stops all its violations of international human rights law and international humanitarian law.
The report adds that Syrian Democratic Forces must immediately stop conscripting children, hold the officers involved in such violations accountable, and pledge to return all children who have been arrested for conscription immediately.

The report also calls on the Armed Opposition and the Syrian National Army to ensure the protection of civilians in all areas under their control, and urges them to investigate incidents that have resulted in civilian casualties, as well as calling on them to take care to distinguish between civilians and military targets and to cease any indiscriminate attacks.

The report calls on the Syrian regime and all the parties to the conflict and controlling forces to provide detailed maps of the locations where they planted landmines, especially in civilian areas or near residential communities.

Lastly, the report stresses the need for humanitarian organizations to develop urgent operational plans to secure decent shelter for internally displaced persons, to exert efforts in landmine clearance operations in parallel with relief operations whenever the opportunity arises, and to provide protected facilities and vehicles, such as medical facilities, schools, and ambulances, with distinctive signs that can be distinguished from long distances.