14,388 Killed Due to Torture by the Main Perpetrator Parties to the Conflict in Syria from March 2011 Until June 2020 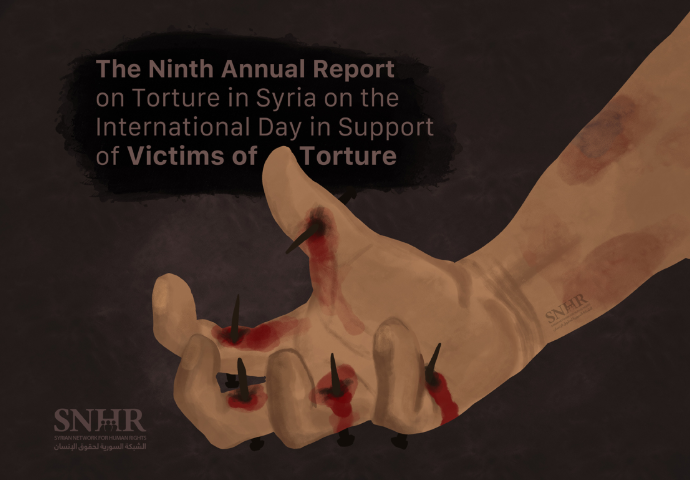 The Syrian Network for Human Rights (SNHR) reveals in its report released today, marking the International Day in Support of Victims of Torture, that at least 14,388 individuals have been killed due to torture by the main perpetrator parties to the conflict in Syria from march 2011 until June 2020.

The 45-page report focuses on the violations SNHR documented since the last report, from June 26, 2019, to June 26, 2020, as well as providing the total documented death toll of victims who died due to torture between March 2011 and June 2020. The report also addresses the almost complete lack of any inclusion of detainees in all amnesty decrees, and the torture practiced against them.

The report stresses that the definition of torture adopted by the SNHR is the one cited in Article 1 of the United Nations’ 1984 Convention against Torture, explaining that it relies mainly on SNHR’s archive of victims, as well as on the archive of detainees and enforced disappearances, resulting from the daily monitoring and documentation carried out continuously since 2011 up to the current moment concerning incidents of torture, arrest and enforced disappearance. The report is also based on the interviews conducted with families of victims and survivors of torture from different Syrian governorates, providing nine accounts, which were obtained directly rather than from open sources.

The report notes that given the Syrian state’s central control of its detention centers, it is highly unlikely that deaths due to torture could take place without the knowledge of the state’s ruling regime, noting that the Syrian regime bears responsibility for proving its claims that the deaths that occurred in regime custody were not due to torture. The report notes that the regime’s failure to conduct even a single investigation into any of these deaths in nine years alone constitutes clear and damning evidence of the regime’s culpability. In addition to this, the report emphasizes that several state institutions are involved in torture and deaths due to torture, the most prominent of which are: the Ministry of Interior, the Ministry of Defense, the security services, civil prisons, military hospitals, the judiciary, the Ministry of Awqaf, and the Office of Burial Services. The report notes that the involvement of all these state bodies also indicates a high level of coordination and harmony between these institutions, which can only be achieved by senior-level management officials in the Syrian regime controlling all of these institutions.

The report emphasizes that whilst all parties to the conflict in Syria have committed the crime of torture in one form or another, the Syrian regime, which controls the country’s military, security and judicial apparatus, is by far the most prolific offender, arresting at least 1.2 million Syrian citizens, who have been subjected in one way or another to torture and humiliation, with the regime still detaining the largest number of prisoners as of the time of releasing this report; in view of this massive number of detainees, 85 percent of whom have been forcibly disappeared, it can clearly be seen that the death toll of torture victims by the regime is far higher than those inflicted by all other parties to the conflict. As the report further reveals, the main cause of death due to torture is negligence in providing health care for wounds and illness, leaving the victim suffering untreated until he or she dies, with the report further noting that numerous methods of torture are used that make detainees an exceptionally vulnerable group which is exposed to a serious risk of the spread of the COVID-19 among them.

The report refers to the SNHR’s team’s regular periodic correspondence with the UN Special Rapporteurs on Extrajudicial, Summary and Arbitrary Executions and on Torture. The Rapporteurs correspond with the Syrian regime about some the cases submitted which SNHR has been able to verify, which are also listed in the special annex in the report prepared by the UN Group on Torture in Syria. The report notes that there’s a devoted form on the SNHR’s official website that families can fill out, with the completed forms submitted automatically to the SNHR’s arrest and torture department’s team responsible for following up on each case, which then communicates with the families to complete the documentation and registration process. In this context, the report requests further cooperation from victims’ families in order to submit as many cases as possible to the UN Special Rapporteurs on Extrajudicial, Summary and Arbitrary Executions and on Torture, noting that the SNHR’s team works 24/7 to build broad relationships with the families of the torture victims, to obtain as much information as possible which is stored on SNHR’s database dedicated specifically to victims of torture.

The report reveals that the amnesty decrees have not ended or even reduced the frequency of torture or arrest by the Syrian regime, with the Syrian regime issuing nearly 17 amnesty decrees, which focused on securing the release of perpetrators of crimes, felonies and offences, while including only a very small number of detainees referred to exceptional courts such as the Counter-Terrorism Court and the military field courts, and excluding the largest proportion of detainees who were not subjected to any trial during the years of their detention, who have been classified as forcibly disappeared.

The report further reveals that at least 116 individuals were released from the Syrian regime’s detention centers, between the issuance of Amnesty Decree No. 6 on March 22, 2020, and June 26, 2020. This record includes only those arrested in connection with their participation and activities in the popular uprising for democracy, or those who were randomly arrested or detained based on malicious security reports without a warrant, with the security branches conducting investigations into them and extracting confessions under torture.

The report notes that SNHR did not document any cases of release from detention centers of the four security branches (Military Security, Air Security, Political Security, and State Security) during this period, either from their central headquarters in Damascus city or their branches across the governorates, noting that these branches possess the powers to not implement laws even if they include cases to which the provisions of the amnesty decree apply.

The report outlines the death toll due to torture since the issuance of Decree No. 6/2020, with SNHR documenting the deaths of at least 33 individuals, including one woman, due to torture and medical negligence in the Syrian regime’s detention centers between March 22, 2020, and June 26, 2020, some of whom were arrested after the issuance of Decree No. 6, dying a few weeks after their arrest. Meanwhile, the bodies of five detainees were handed oved to their families, bearing signs of torture, with the report revealing that the remaining victims’ bodies have not been handed over to their families. In addition, the report notes, a number of those victims had previously undergone a settlement of their security status.

The report stresses that international law wholly prohibits torture and other forms of cruel, inhumane, or degrading treatment. This being a customary rule, states are prohibited from dismissing or undermining this rule in favor of other rights or values, even in times of emergency. Violating the laws prohibiting torture is an international crime according to international criminal law, with those individuals who issued orders for torture, or assisted in its occurrence defined as being criminals with legal responsibility for these practices.

The report notes that the Syrian regime has clearly violated the provisions of the Syrian constitution and the provisions of the Convention against Torture that Syria ratified in 2004, as well as tampering with existing laws by enacting legislation that protects its forces from any prosecution, noting that Syrian Democratic Forces, factions of the Armed Opposition, and -Hay’at Tahrir al Sham bear responsibility for the torture that took place in their detention centers.

The report recommends that the UN Security Council and the United Nations should protect civilians detained by the Syrian regime from torture and lethal torture, and to rescue those who remain alive.
The report also calls on the UN General Assembly to take the initiative in the Syrian situation and resort to invoking the principle of Uniting for Peace, given the total paralysis affecting the Security Council due to the Russian-Chinese veto.

The report also recommends that all UN relief agencies should search for families that have lost their primary breadwinner or one of their members due to torture, to ensure that aid is continuously delivered to their beneficiaries, and to initiate rehabilitation.

The report stresses the imperative need for States which are parties to the Convention against Torture to take the necessary measures to establish their jurisdiction over perpetrators of torture and to make all the necessary material and security efforts to attain this objective.

The report provides a set of recommendations for Syrian Democratic Forces, extremist Islamist groups, and factions of the Armed Opposition, urging them to adhere to the standards of international human rights law, stop the use of torture against political or military opponents, launch investigations into those involved in these crimes, and hold them accountable.