The Presidential Elections That the Syrian Regime Unilaterally Plans to Hold Are Illegitimate, Imposed by Regime Security Services and Undermine the Political Process 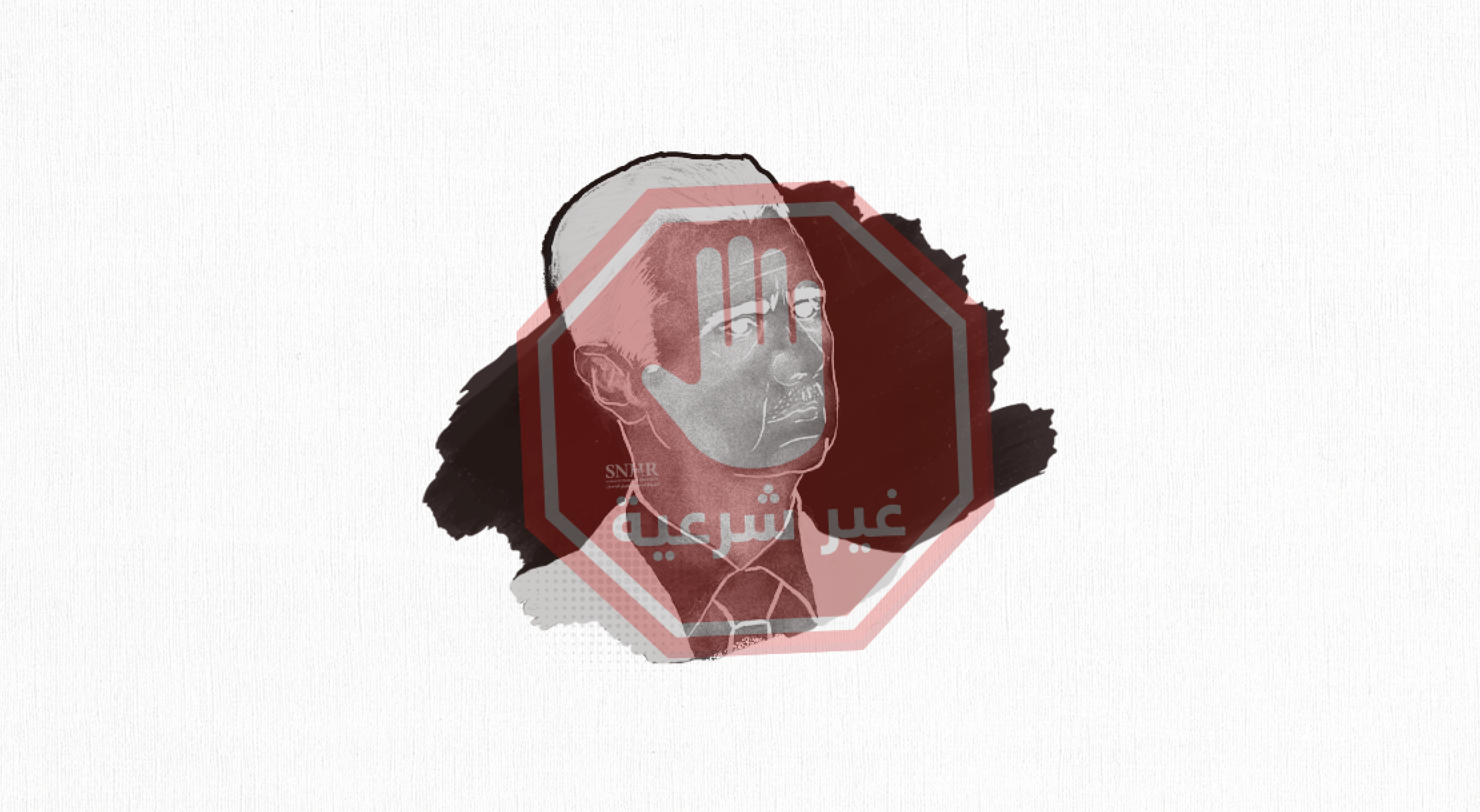 Paris – In its latest report, the Syrian Network for Human Rights (SNHR) reveals that the presidential elections which the Syrian regime unilaterally plans to hold are illegitimate and imposed by the regime’s security services, and that they undermine the political process, noting that Bashar al Assad is accused of committing many crimes against humanity and war crimes and must be held accountable.

The 15-page report observes that the Syrian regime violates Security Council Resolution No. 2118 and the Geneva Communiqué, by announcing holding presidential elections in May 2021, as well as violating UN Security Council Resolution 2254 of 2015, in which it set out a clear sequential path for the political transition process, stressing that there’s always only one candidate from the Ba’ath Party, Bashar al Assad. The report further notes that this year’s sham election takes place after the Joint Investigative Mechanism, established by the Security Council in August 2015, which confirmed the Syrian regime’s responsibility for the use of chemical weapons of mass destruction on three separate occasions, in addition to being held in the wake of conclusive reports by the Investigation and Identification Team (IIT) of the Organization for the Prohibition of Chemical Weapons (OPCW), which confirmed the Syrian regime’s responsibility for four additional chemical attacks. The report clarifies that the Syrian regime already violated Security Council Resolution No. 2118 and the Geneva Communiqué, by holding presidential elections unilaterally in June 2014, which were a pre-determined and programmed sham, designed solely to achieve a landslide victory for the Ba’ath Party’s one candidate Bashar al Assad.

Fadel Abdul Ghany, Director of the Syrian Network for Human Rights, says:
“That a person involved in crimes against humanity can conduct and win presidential elections makes Syrian society lose any confidence in the political process and democratization, enhances the narrative of extremist organizations, and spreads a culture of revenge. States supporting the political process must absolutely reject these sham elections, emphasize their illegitimacy, and respond by taking serious steps within a specific timetable to achieve the political transition towards democracy and human rights.”

The report provides eight main reasons organized in order of importance that delegitimize the presidential elections which the Syrian regime plans to hold unilaterally, meaning that the results are not binding on the Syrian people. The eight main points came as follows:
One: The regime’s elections have taken and are taking place according to the 2012 constitution which SNHR considers wholly illegitimate, for the following main reasons:
1. It was approved unilaterally and exclusively by the ruling authority as a device targeting all the actual opponents of the Syrian regime.
2. The referendum took place in light of the Syrian regime’s perpetrating crimes against humanity and war crimes, with these crimes generating a state of terror and dread among Syrian citizens, pushing those who remain in regime-controlled areas to vote in favor of the Syrian regime and its constitution.
3. Many articles of the Syrian regime’s 2012 constitution contravene the most basic standards of constitutional articles, undermine the principle of separation of powers, and derive the concept of the constitution from its content.
4. The Syrian regime’s 2012 security constitution is designed to serve the President of the Republic, Bashar al Assad, ensuring his exclusive ‘victory’ in all the upcoming presidential elections, with nobody else allowed or granted the capability to defeat him.

Two: Lack of actual influence of the Judicial Authority: The Syrian regime, embodied in the person of Bashar al Assad, controls the Supreme Judicial Council and the Supreme Constitutional Court.
Three: The control of the executive authority is embodied in the person of the President of the Republic who presides over the legislative authority in favor of one party that nominates one person for the presidential elections, namely Bashar al Assad.
Four: Bashar al Assad, as the Commander-in-Chief of the army and armed forces, is implicated in crimes against humanity and war crimes and cannot be accepted as the president of the Syrian people; on the contrary, he must be held accountable
Five: Holding presidential elections violates Security Council Resolutions 2118 and 2254.
Six: The domination and threat of the security services rob Syrians of any safe and neutral environment and freedom of opinion.
Seven: More than half of the Syrian people are forcibly displaced.
Eight: About 37% of the area of the Syrian state remains outside the control of the Syrian regime.

As the report notes, the failure of the international community, including the UN Security Council, has helped in the failure to achieve any serious progress at the level of political transition, with no progress made towards any political transition for democracy and human rights. This failure, along with the complete impunity granted to the Syrian regime, helps the regime to continue to challenge the international community and to hold unilateral presidential elections, nominating the same person involved in committing crimes against humanity.

The report recommends that the UN Envoy, Geir O. Pedersen, and the states sponsoring the peace process in Geneva should condemn the unilateral holding of presidential elections, announce the UN’s refusal to recognize their results, work to oblige all parties to pursue the path of a political solution under the relevant Security Council resolutions, and set a specific timetable for accomplishing this.

The report also recommends that the UN Envoy, Geir O. Pedersen, and the states sponsoring the peace process in Geneva should announce that those involved in atrocious crimes such as crimes against humanity have no role in the future of Syria, and stress the rejection of any rehabilitation for them since events like the election contribute to fueling the conflict rather than resolving it.

The report additionally calls on the UN Security Council to issue a resolution explaining the unilateral presidential elections’ violation of UNSC resolutions related to the political process, as well as urging the Security Council to work to implement Resolution 2254 as soon as possible.
The report also provides additional recommendations to both Russia and the Syrian regime.