14,537 Killed Due to Torture by the Parties to the Conflict and the Controlling Forces in Syria, Mostly by the Syrian Regime, from March 2011 Until June 2021 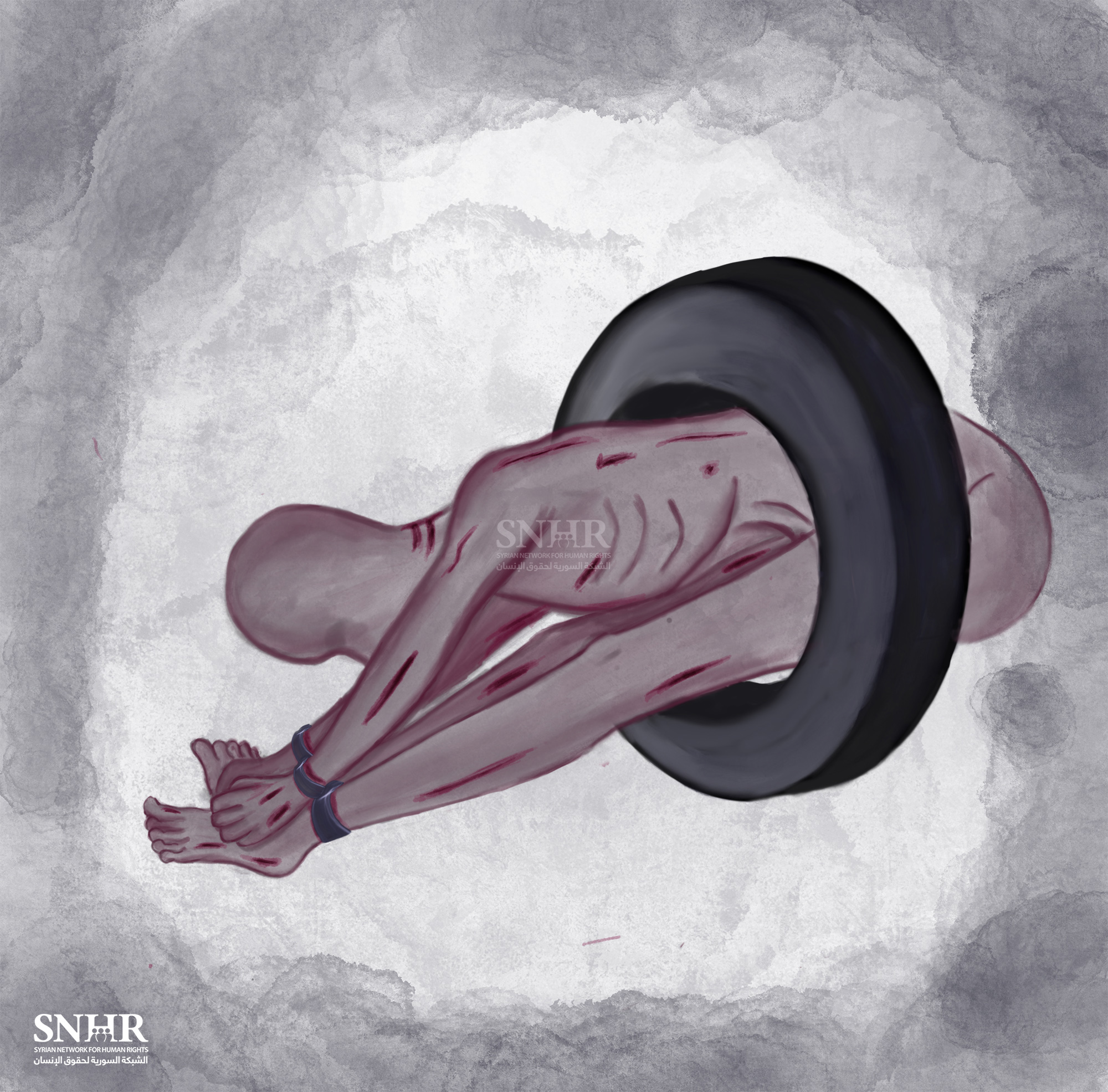 Paris – The Syrian Network for Human Rights (SNHR) today issues its tenth annual report on torture in Syria, marking the International Day in Support of Victims of Torture, which falls annually on June 26. In the latest report, SNHR reveals that torture has been used as a systemic and ongoing strategy for ten years, and that the documented death toll of those killed under torture has reached 14,537 individuals, from March 2011 until June 2021, including 180 children and 92 women (adult female), with the vast majority of all these victims killed at the hands of Syrian regime forces.

The 49-page report includes details of a wide range of incidents of torture and testimonies of survivors of detention and torture, as well as deaths due to torture, that we have documented over the past year, since June 26, 2020. The report notes that from the earliest days of the uprising torture has been one of the primary violations perpetrated by the Syrian regime against political protesters, following their arbitrary arrest, with participants in peaceful demonstrations generally subjected to: beatings, insults, threats and arrests without a judicial warrant, as well as having their mobile phones confiscated, and being prevented from communicating with their families or a lawyer. Many of those detained in this way have subsequently been classified as forcibly disappeared. Each of these practices involves one or more forms of torture, with this torture often leading to the detainee’s death. The report adds that the crime of torture in Syria is systematic and widespread, most especially by the Syrian regime, which is detaining by far the largest number of detainees, with torture being widely practiced and having no known limits, meaning that there is no limitation or specific amount of torture inflicted due to the commission of any particular act.

The report stresses that the definition of torture adopted by the SNHR is the one cited in the United Nations’ 1984 Convention against Torture, explaining that our findings are based on interviews we conducted with the families of victims and survivors of torture inflicted in detention centers run by various parties to the conflict, providing 13 accounts, which we obtained directly rather than from open sources. The statistics included in this report are also based on the cumulative work, resulting from the daily monitoring and documentation work that we have carried out continuously since 2011 up to the current moment concerning incidents of arbitrary arrest and torture. The report categorizes the deaths due to torture according to the governorate which each victim comes from, rather than the place where the torture took place because, in most cases, the place where the incidents of and deaths by torture occurred are the detention centers in Damascus city, so we categorize deaths due to torture according to the governorate which the victim comes from in order to show the extent of the loss and violence suffered by the people of that governorate compared to other governorates.

“The massive extent of the torture, inflicted using unimaginably brutal methods, on a significant proportion of Syrian society numbering at least tens of thousands, by all parties to the conflict, most especially the Syrian regime, which weaponizes state institutions to serve as torture instruments, has generated a state of intense frustration towards the perpetrators of these violations, mixed with a strong desire for revenge; the continuing nature of the Syrian conflict, despite the passage of over a decade since it began, means that many members of society, who have been traumatized by torture and see no hope of justice, are like time bombs. The international community must lead the transitional justice process as quickly as possible.”

As the report reveals, the Syrian regime, which is responsible for the arrest of by far the largest number of Syrian citizens, continues to detain or forcibly disappears the great majority of them, with torture continuing throughout the duration of every person’s detention. The report details the Syrian regime’s use of torture, in many cases in connection with the victim’s affiliation with a certain area known for opposing the Syrian regime as a form of collective retribution, in the regime’s detention centers, and notes that the governorates of Daraa and Homs have seen the highest numbers of residents killed due to torture. The report also outlines the cumulative indicator of the torture death toll in Syria since 2011.

The report notes that Syrian regime has established ‘laws’ that allow torture and prevent criminals from being held accountable, as well as giving complete immunity from prosecution to those who carry out its orders, with the report outlining the most prominent of these laws, adding that the highly centralized nature of the Syrian regime means that it could not torture at least tens of thousands of detainees and kill vast numbers of them without direct orders from the individual at the head of this pyramid, namely the President of the Republic. The report further notes that the Syrian regime’s systematic use of torture and the vast number of associated deaths necessitates the participation of not just one but several state institutions.

The report adds that under international humanitarian law, commanders and other senior officials are held responsible for war crimes committed by their subordinates, with the report providing the names of the most prominent leaders of the Syrian regime involved in torture, according to the Syrian Network for Human Rights database of data of perpetrators of violations. The report also demands that the Independent International Commission of Inquiry on Syria should reveal the names of individuals whose involvement in committing egregious violations constituting crimes against humanity and war crimes it has verified.

Finally, the report welcomes the recent report from the Independent International Commission of Inquiry, issued in March 2021, noting that the Syrian Network for Human Rights contributed to this report through extensive sharing of a large quantity of data and information; SNHR believes that this report is of great importance and constitutes important material to hold the Syrian regime accountable and to help in obstructing all efforts aimed at rehabilitating it after it lost any legitimacy at the political and human rights levels among the most prominent and important countries in the world. The report also welcomes the Dutch, Canadian and German steps to hold perpetrators of torture in Syria accountable.

The report further stresses that international law wholly prohibits torture and other forms of cruel, inhumane, or degrading treatment. This being a customary rule, states are prohibited from dismissing or undermining this rule in favor of other rights or values, even in times of emergency. Violating the laws prohibiting torture is an international crime under international criminal law, with those individuals who issued orders for torture, or assisted in its occurrence defined as being criminals with legal responsibility for these practices.

The report emphasizes that the Syrian regime has clearly violated the provisions of the Syrian constitution and the provisions of the Convention against Torture which Syria ratified in 2004, as well as tampering with existing laws by enacting legislation that protects its forces from any prosecution, noting that none of the parties to the conflict have opened any investigations into the practices of torture, with none of their members suspected of being involved in committing this violation being held accountable, and no apology or compensation being offered to the victims.

The report recommends that the UN Security Council and the United Nations should condemn the Syrian regime’s practices involving the crime of torture and work seriously using all possible means to stop it, in order to save tens of thousands of detained Syrian citizens from death due to torture.

The report also recommends that States which are parties to the Convention against Torture should take the necessary measures to establish their jurisdiction over perpetrators of torture and join the Dutch, Canadian and German efforts to hold the Syrian regime accountable for the crime of torture, as well as providing a number of other recommendations.