“They made me do it” – Necessity and Duress Defenses 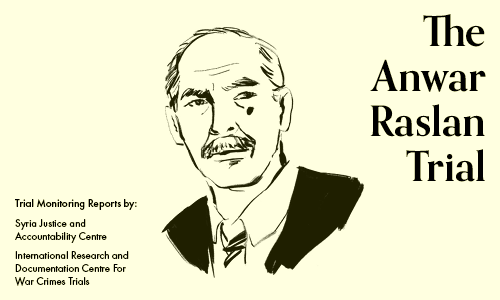 A big moment in the trial of Anwar Raslan and Eyad Al Gharib came on May 18 when Anwar Raslan’s defense counsel presented Raslan’s statement to the court. Syrian victims in the court were curious to understand how those accused of such serious crimes would respond to the charges. One said, “I thought I would have a hard time about hearing their point of view; I can’t imagine what he’s going to say,” (@ 12:30). Raslan denied all the charges, stated that he did not hit or torture anyone, nor he did order anyone to be tortured. But Al-Gharib remained silent.

Subsequently, German government and police officials have testified about statements made during their questioning of Al-Gharib. According to a police inspector, Accused Al-Gharib acknowledged that Syrian intelligence services have always committed crimes against humanity and stated that if someone was suspected to not be loyal at Branch 251, then they would be relocated to Branch 295, “where it was easier to get rid of him or have him killed.” In other words, he had no choice but to follow these orders.

These types of defenses are called necessity or duress, and whether or not they could lead to acquittal will depend on German law, even though the alleged acts occurred in Syria.

Defenses in German law are divided into two broad categories: justification and excuse. A justification defense prevents an actor from criminal responsibility even though the actor committed the criminal act. The act is considered lawful if the accused acted on the basis of a permissive or socially acceptable norm. For instance, killing someone else to save your own life may be considered “justified” depending on the circumstances.

Necessity is a classic “lesser-evil” defense based on the idea that everyone is expected to tolerate infringements upon his rights if this is necessary to avert greater harm from others. Thus, necessity serves as a justification, which negates the wrongdoing.

It is recognized in section 34 of the StGb (Strafgesetzbuch – German Criminal Code), which states:

A person who, faced with an imminent danger to life, limb, freedom, honour, property or another legal interest which cannot otherwise be averted, commits an act to avert the danger from himself or another, does not act unlawfully, if, upon weighing the conflicting interests, in particular the affected legal interests and the degree of the danger facing them, the protected interest substantially outweighs the one interfered with. This shall apply only if and to the extent that the act committed is an adequate means to avert the danger. [official English translation]

The main elements in order to prove this defense are: (1) a situation of necessity, where there is an imminent danger to a protect a legal interest (the danger can be man-made or a natural disaster); (2) a necessary defensive action where the actor must use the least severe means to (effectively) avert the danger; and (3) a proportionality test where the act is justified only if the protected interest substantially outweighs the one interfered with.

Under the German legal order, all lives are of equal value and no life prevails over another. Therefore, a balancing of life against life is not possible—be it in quantitative (one life against hundreds) or qualitative (the life of an old and frail man against the life of a newborn child). Thus, the killing of innocent people can never be justified by necessity.

Compared to necessity, the defense of duress has a very limited scope. Whereas necessity protects a broader range of protected interests, duress protects only life, limb and freedom.

Section 35(1) of the StGB (Strafgesetzbuch – German Criminal Code) of the excuse of duress provides:

A person who, faced with an imminent danger to life, limb or freedom which cannot otherwise be averted, commits an unlawful act to avert the danger from himself, a relative or person close to him, acts without guilt. [official English translation]

To qualify for the defense, the accused must face an (1) imminent danger to life, limb or freedom which cannot otherwise be averted and (2) this danger must be directed at the actor or a person close to him, as only then is the commission of a legal wrong understandable and socially tolerable (dangers to property are not possible). If these conditions are fulfilled, section 35(1) of the StGB relieves the actor from criminal responsibility, provided that his conduct is necessary to avert the danger.

Unlike necessity, the defense of duress only negates the actor’s blameworthiness and not the wrongfulness of his conduct, and thus, does not require balancing between affected interests—I.e., the actor’s interests compared to the unlawful act (crime) he committed. Therefore, under duress, a person may kill several innocents to save his own life.

If Accused Raslan and Al-Gharib were hypothetically facing trial under Syrian law, they would similarly have the defenses of duress and necessity available, per articles 226 and 228 of the Syrian Penal Code. Duress (coercion) under the Syrian Penal code involves material or moral force that causes a person to say or act without their intent. An accused’s criminal intent is the most important factor in assessing duress. However, under article 227(1), if Accused Raslan and Al-Gharib engaged in torture on the basis of subjective fear without a real threat or coercion, they would not benefit from the defense.

Will Raslan or Al-Gharib claim Duress?

Duress has been raised as a defense in other war crimes trials, particularly where an accused answers to more senior members of a hierarchy. For instance, Dražen Erdemović, a regular soldier, killed multiple victims in the Srebrenica massacre in the former Yugoslavia but claimed that he only did so because his own life and that of his family were threatened by his superiors, thereby invoking a defense of duress. Though he was still convicted of the crimes, his sentence was reduced.

Of the two accused in this trial, Al-Gharib is more likely to invoke a duress defense. The question will then be whether there was “an imminent danger to life, limb or freedom” and whether it was necessary for him to torture and kill at Branch 251 in order to avert the danger to himself. If the accused could have made another choice, duress is unlikely to excuse his criminal conduct and lead to his acquittal.

Recently, a Syrian doctor was arrested in Germany after he was accused of torturing detainees while working in a military hospital in Homs. How duress plays out in the Raslan and Al-Gharib trial may provide an indication about how such defenses will be received in future trials.