A Syrian mother protected her daughter during war. Her work exposed Assad’s atrocities

“We knew that it wasn’t easy to protect this girl,” she said. “But at the same time, we knew that this is our life and this is where we would live, so why would we not have our baby here?” 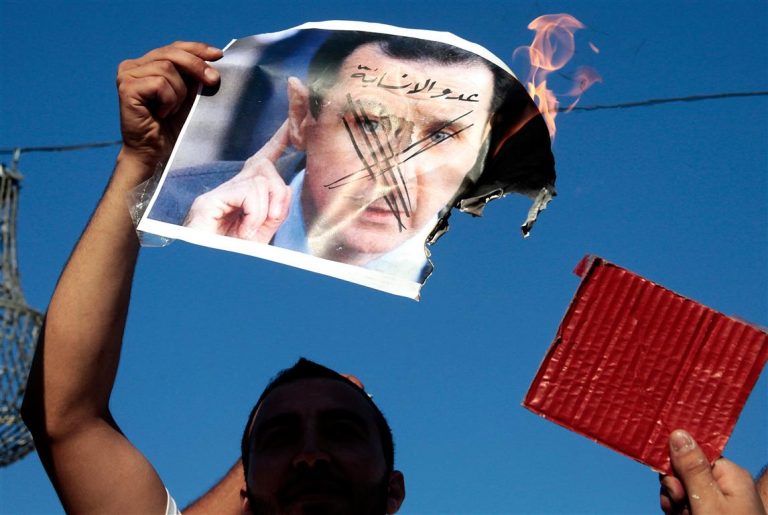 AUSTIN — Laying on her bed in Aleppo, Waad al-Kateab greeted Sama, her giggly newborn daughter, like she did most mornings, fearful of arrests, bombings and death. The Syrian mother wondered how she could bring Sama into a world filled with terror and war.

“Good morning, sweetheart,” the filmmaker said to her daughter in the documentary “For Sama.” “There are a lot of airstrikes today, right?”

The next nightmare was downstairs. It was September 2016, the third month the city was under siege by the Syrian President Bashar al-Assad’s forces, and more children were dead. Al-Kateab, a citizen journalist and activist who began documenting the horrors unfolding in rebel-held Aleppo in 2011, filmed a mother who has just lost her son in the latest round of bombings. Carrying the corpse of her dead child, the mother repeatedly tells anyone who will listen, “This is my son. My darling is dead. He is dead.”

Even as she’s 7,000 miles from the scene of that day, sitting in a quiet boardroom at a Hilton in downtown Austin earlier this month, al-Kateab says she can still smell Aleppo on her skin, and that the image of that mother hasn’t left her.

“I didn’t know what to do,” al-Kateab said an interview with The Washington Post at South by Southwest, where “For Sama,” her film about the war, debuted earlier this month. “You feel helpless. I couldn’t do anything in this really big moment. . . . Whatever was happening was stronger than us and really wanted to destroy us all.”

But the Syrian filmmaker is comforted knowing her sacrifice wasn’t for nothing. The loss from the conflict in Syria, one of the world’s most devastating humanitarian crises, is felt through the film she made for her firstborn daughter. Al-Kateab’s deeply personal journey of motherhood in wartime won best documentary feature at the festival, sharpening the lens for an American audience on the devastation Assad and the Russian-backed army laid on Aleppo.

“There are a lot of civilians who are still there and they don’t have any choice to leave,” she told The Post. “They hate themselves and hate their lives because of this bad situation there.”

Al-Kateab’s work starts with the fleeting moments of hope that would eventually rot into destruction and desolation amid Assad’s brutal repression. In April 2012, al-Kateab was still a student at Aleppo University when protests against Assad’s regime intensified. Fireworks, singing, dancing and chants in the streets made the early movement feel optimistic. But the protests turned into a civil war, with citizens, many in blue-tarp makeshift body bags, executed with a gunshot wound to the head. Children were left dead from the bombings, covered in blood.

Al-Kateab would fall in love and start a family in the worst of times for Syria. Around 2014, she married Hamza, a medical student she met during the protests. They danced to Willie Nelson’s “Crazy” on their wedding day.

When Sama was born in 2015, the girl gave al-Kateab hope, even if it meant her daughter lived in a room with windows protected by sandbags to prevent any debris from the bombings killing her. This new life felt fragile. Her happiness was tempered with fear, especially as eight of the nine hospitals in Aleppo were bombed and destroyed.

“We knew that it wasn’t easy to protect this girl,” she said. “But at the same time, we knew that this is our life and this is where we would live, so why would we not have our baby here?”

Living in a constant state of fear in a city under siege led al-Kateab, with her camera phone, to document what was happening, starting in 2011. In filming the growing wartime atrocities in Aleppo, she held out hope that the world would respond to the crisis. Al-Kateab would go from being a student to a full-time activist and citizen journalist. She filmed whenever she could, whether it was during a rare moment of peace with friends and family, a violent protest or when they were being bombed. After Sama was born, she vowed to leave her daughter the footage, “to see what I fought for, in case I don’t survive.”

Since the Assad regime took back Aleppo from rebel forces at the end of 2016, news media in the United States have repeatedly used the phrase “Assad’s victory” when covering the conflict. That framing, al-Kateab argues, minimizes the regime’s atrocities. An estimated 400,000 Syrians were killed during the first five years of the country’s civil war, according to the U.N. special envoy for Syria.

“It’s really an amazing victory, you know, since it’s a victory for a country that is destroyed, a country without Syrians,” she said. “I don’t know what victory he is speaking about. It’s amazing that he feels this is a victory.”

Her 300 hours’ worth of footage was first edited and condensed into “Inside Aleppo,” a series of pieces that aired in 2016 for Channel 4 News, a British nightly news program, and received hundreds of millions of online views, winning dozens of awards in the process. Director Edward Watts, who helped bring al-Kateab’s work to the British audience, says that her story presents humanity that’s sometimes overlooked or ignored by Western media.

“We’ve often received news from Syria through the filters of ISIS and that kind of reporting,” Watts said. “What you see in what Waad captured is just people you recognize, people you know. You feel like you know these guys. Human beings who are delighted by a piece of fruit or playing with their kids or cracking jokes.”

Al-Kateab stresses that people needed to see some of the terrible scenes that made up her reality. “I was living every moment again and again,” she said. “I lived each moment, happily and very sadly, but I never thought that I would do this when we literally lost Aleppo.”

Through the years of war, al-Kateab viewed her greatest act of defiance as staying in Aleppo. But that was no longer an option in December 2016, as Russian troops offered up an ultimatum to her husband, Hamza: Surrender or go into exile. In staying behind to treat wounded civilians, he had become a target for the Assad regime. Around 2017, the filmmaker and her family fled to the U.K., where Channel 4 commissioned her to turn those hundreds of hours of footage into a documentary.

“We didn’t want to hide the reality,” Watts said.

The film, which will be released theatrically this summer and broadcast on PBS’s “Frontline” at the end of year, comes as the American public remains divided on President Trump’s announcement in January that the United States would withdraw troops from Syria.

No topic brings Al-Kateab more joy than Sama, now 3, or her youngest daughter, Taima, 19 months. The activist says Sama’s only crime while in Aleppo was that her mother was a journalist who tried to show the truth of what was unfolding, and her father, Hamza, was a doctor who helped victims of the conflict. Yet, al-Kateab still speaks with a fraction of a dream that she might one day return to Aleppo when Assad is not in power, showing her daughters what was once home. She smiles, proud of what Aleppo was — and what it could be again.

“I really want this day to come,” she said, “but this day will not come until this criminal regime will be in court.”