“We are tired of promises and pledges on the TVs and radios,” Shoukran Mortaja, a renowned actress, complained in a public posting on her page addressed to “Mr. President.” 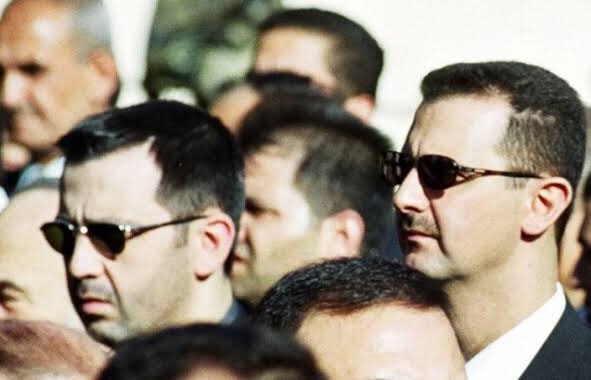 BEIRUT — Syrians who remained loyal to President Bashar al-Assad throughout the past eight years of war are increasingly expressing discontent with his government as living standards in the country continue to deteriorate even as the conflict winds down.

Conditions are dire for most of the 19 million Syrians living across the ravaged country, including in the roughly one-third that remains outside government control. Whole towns and villages have been depopulated and destroyed, and an estimated 89 percent of the population is living in poverty and dependent on international food handouts, according to the United Nations.

But for the first time, those living in the pro-government areas that were spared the worst of the violence are experiencing some of the harshest deprivations, including in the capital, Damascus. 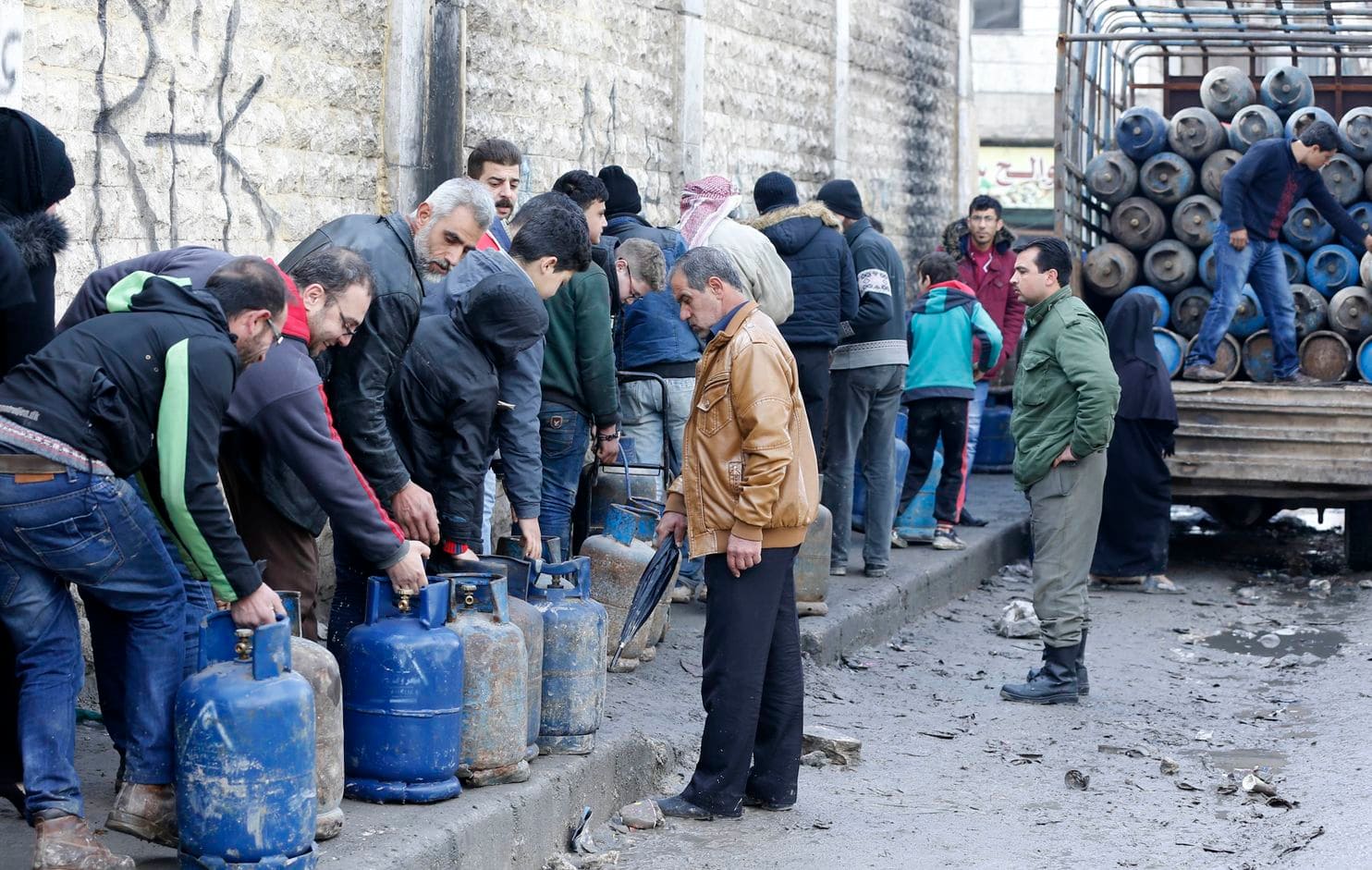 Residents there say life has become more difficult in recent months than at any point in the past eight years, bringing a realization that there will be no swift recovery from the immense damage inflicted by the war on Syria’s economy, social fabric and standing in the international community.

Until the last of the rebellious Damascus suburbs were reconquered last year, shells fired from rebel-held territory regularly exploded in the streets of the capital, sustaining a mood of fear and uncertainty.

The conquest of the Eastern Ghouta suburb last year ended the rocket fire, but it has not brought the respite residents were hoping for, said a Damascus-based writer, who spoke on the condition of anonymity because he fears for his safety. “This is the worst we have ever known,” he said. “People can barely survive, and the percentage of poor is increasing all the time.”

Acute shortages of fuel, cooking gas and electricity have left citizens shivering in darkness through an unusually cold winter. The Syrian currency, which had plunged and then stabilized after the war broke out, is sliding again, sending prices soaring.

Many thousands of men who fought on the front lines for years are returning home without hope of finding jobs. The wartime economy has fueled corruption on an unprecedented scale, compounding the daily challenge of lining up for long hours to secure basic necessities with the indignity of having to pay multiple bribes to layers of officialdom, according to Damascus residents.

Widespread expectations, encouraged by the government — that wealthy Arab investors would flock back to Damascus, Chinese funding for reconstruction projects would flow and U.S. sanctions would be relaxed — have been disappointed and don’t seem likely to be fulfilled anytime soon. 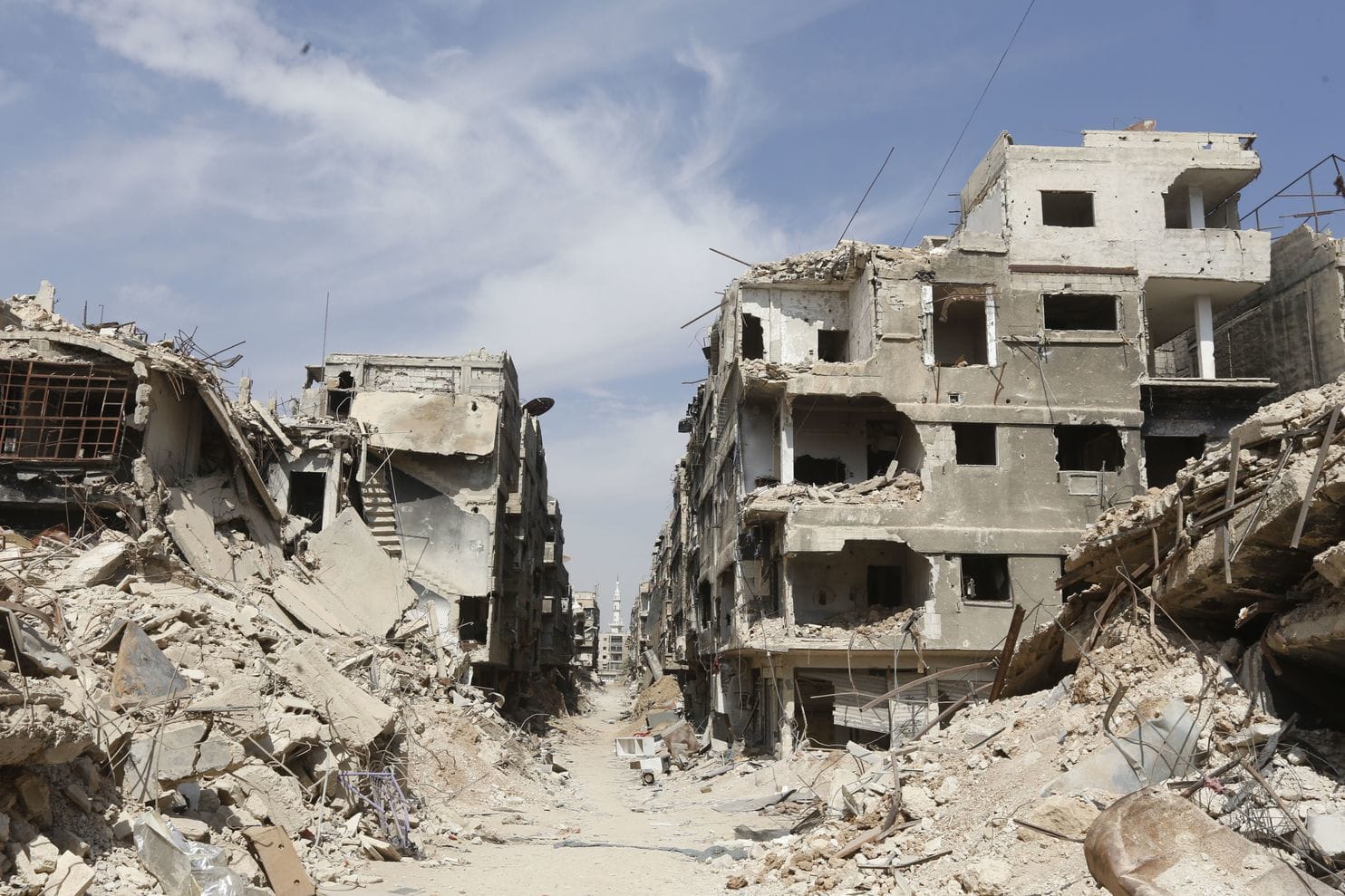 The cafes and bars of Damascus are packed at night, creating the impression of a city on the path to recovery. But the revelers represent a tiny elite that has profited from the war, and their conspicuous consumption only fuels the resentment of the vast majority of people for whom life is a daily struggle to survive, the residents say.

“What is being touted as a big military victory has not translated into the improvement of quality of life that was expected,” said Danny Makki, a British Syrian analyst and journalist living in Damascus. “You’ve got 3 to 4 percent of people with the vast majority of the wealth, and for the rest, life is just a struggle.”

“It’s such a depressing mood, and it’s been such a harsh winter,” he added. “Even when we had militant groups on the doorstep of Damascus, we never had such big issues from the quality-of-life perspective.”

The unhappiness is reflected in an unprecedented torrent of complaints on social media by Assad loyalists, including some of the celebrities and television personalities who have used their stature in the past to rally support for his regime.

“We won, but there is no meaning to victory if we no longer have the homeland we knew,” Ayman Zedan, a prominent actor, wrote in a public post on his Facebook page, reflecting the sense of disappointment that Assad’s military victory over his opponents has brought no respite for his supporters.

“We are tired of promises and pledges on the TVs and radios,” Shoukran Mortaja, a renowned actress, complained in a public posting on her page addressed to “Mr. President.”

“Are we really going to let those who didn’t die in the war die from misery, cold and inflated prices?” she asked.

Scores of people among her 54,000 followers expressed support in comments on the post, which was shared more than 2,000 times. “I am certain that your message will reach the president. We are with you and we add our voices to yours,” one of them said.

Assad has apparently heard the complaints. In a February speech in Damascus, he was unusually defensive, acknowledging that some people are genuinely suffering and that corruption among local officials has contributed to the hardships people endure.

But he shrugged off responsibility, accusing expatriate Syrians of leveling the strongest criticisms and attributing the shortages of vital products to U.S. sanctions.

Economists and Western diplomats say new sanctions imposed by the U.S. Treasury in November were indeed the most likely cause of the unexpectedly severe shortages of energy products in recent months.

The impact on ordinary people of limited U.S. and European sanctions imposed in the earliest days of the war against individuals associated with the Assad regime has been minimal, said Jihad Yazigi, editor of the Syria Report, a newsletter focused on business and economics. Apart from one brief period two years ago when fuel and gas supplies ran short because of a dispute between the government and Iran, Syria’s major supplier, most products have been widely available in government-held areas throughout the conflict, he said.

However, the latest Treasury sanctions targeted the shipping companies that deliver fuel and gas to Syria, abruptly deterring those who had transported fuel to Syria from continuing to do so for fear of jeopardizing their business elsewhere, he said.

Most Syrians, nonetheless, place blame for the shortages squarely on their government, according to residents, reflecting the depth of the building embitterment.

“People don’t blame America, or at least they don’t put primary responsibility on America. The biggest blame they place is on the government,” said the Damascus-based writer. “They know the government is incapable and corrupt.”

Assad himself remains off-limits to the criticism. The generally expressed view, the writer said, is that Assad is not involved in the day-to-day running of the country and that corrupt, inept officials and local warlords empowered by the conflict are responsible for any failures.

Reflecting that attitude, the actress included in her Facebook posting a direct appeal to Assad. “I am sending you this message because you are the only one who will listen and promise us, and then keep your promise,” she wrote. “We are all with the homeland, but we don’t want the homeland to be against us.”

No one expects another revolt against Assad for now, at least in loyalist areas, the Syrians say. The 2011 protests, in which millions of people took to the streets to call for Assad to step down, ignited a war that cost the lives of as many as half a million people, prompted the flight of more than 6 million refugees and inflicted as much as $388 billion worth of damage on the economy and infrastructure, according to the United Nations.

“That’s the last thing people want. People have lost their will to care,” the Damascus writer said. “You won’t find a single family who hasn’t lost someone. They just want it to be over and are trying to make ends meet.” 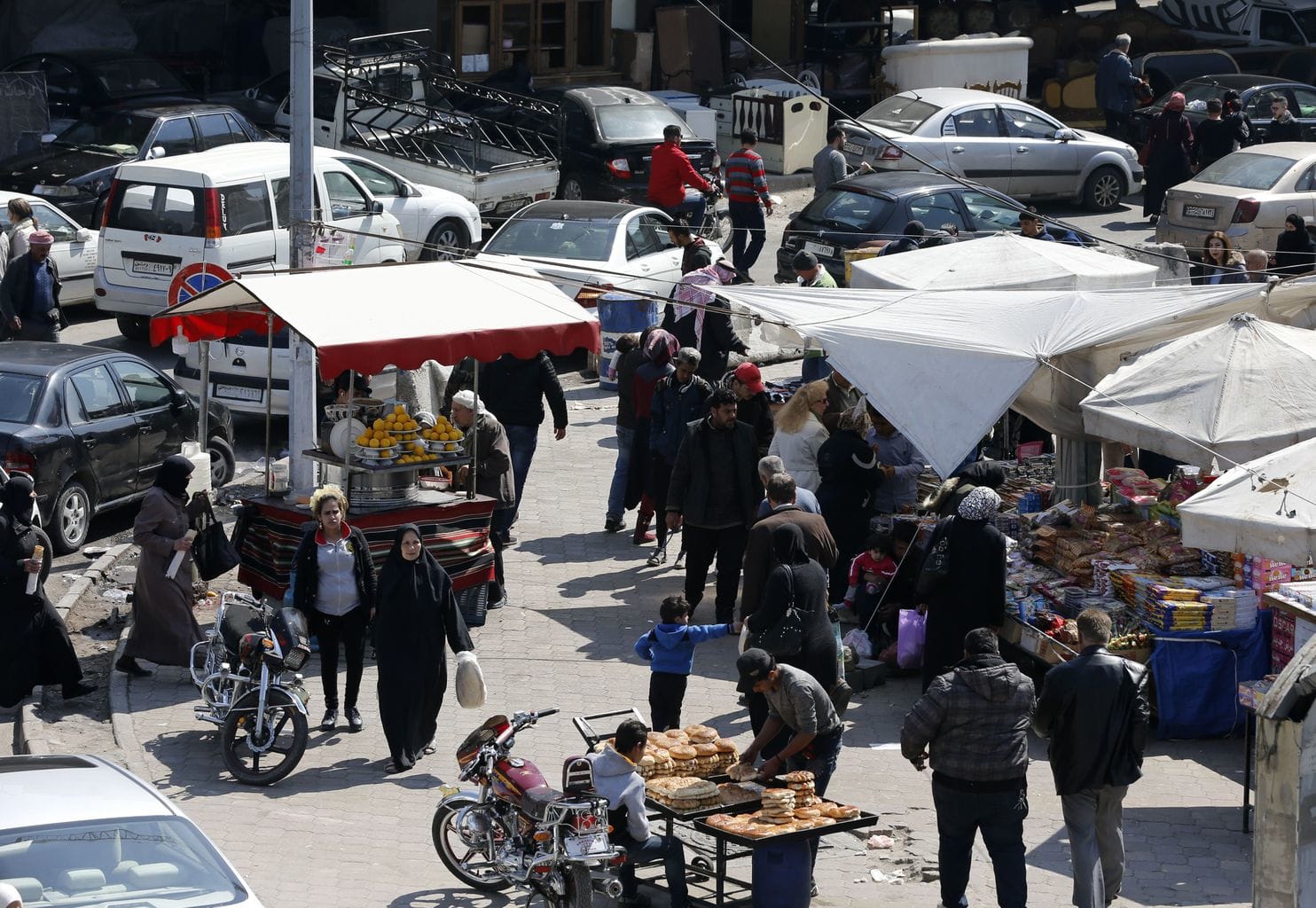 The ubiquitous presence of the intelligence agencies also imposes boundaries on the rampant criticisms. The detention and apparent disappearance this year of Wissam Tayar, a prominent regime cheerleader who had run the popular pro-regime Facebook news page Damascus Now, sent a chill among many unhappy regime supporters. The reasons for his arrest remain unclear, and his current whereabouts are unknown, according to people who know him.

Syrians debate whether the government has decided to tolerate the rare criticism from its supporters or whether it simply lacks the capacity to round up all of the complainers. More than 100,000 Syrians have disappeared into the gulag of Syria’s prison system since 2011, and tens of thousands have been executed or died under torture, according to the Syrian Network for Human Rights, which maintains a ­database of civilian victims of the war.

Most of those victims, however, were supporters of the calls for Assad to leave office. As the challenge abates from an opposition that included a spectrum of views, from democracy activists to violent jihadist extremists, those who stood by him feel entitled to express their opinions, Yazigi said.

“There isn’t anymore a sense that they need to stick together to face a common enemy,” Yazigi said. “People are saying, ‘We have defeated the common enemy, so now let’s look at who is responsible for the catastrophe we are in.’ ”

That sentiment is also, however, raising questions about the future direction of Syria and the sustainability of the iron-fist rule of the Assad family, according to a retired Syrian government official, who also spoke on the condition of anonymity because of safety concerns.

Many Syrian loyalists say they are pinning their hopes on the ­Russian-led peace process, which is backed by the United Nations. The Russian plan envisages reforms to the Syrian constitution that would bring some members of the opposition into government and perhaps dilute Assad’s absolute power. The idea is that such a settlement would then be endorsed by the United States and Europe, opening the way for reconstruction funding, foreign investment and Syria’s rehabilitation by the international community.

Assad, however, has repeatedly expressed his opposition to any constitutional changes that are negotiated by foreign powers.

The retired official does not support the opposition, but he questions the viability of a regime that has shown no willingness to compromise in the face of the vast challenges confronting it.

“If this was basketball, we would be in timeout,” he said. “People have a feeling that the war hasn’t ended yet.”