The familiar sound of warplanes was heard across towns and villages in north-west Syria this week as forces loyal to President Bashar al-Assad intensified their bloody assault on the country’s last major rebel stronghold.

Asem al-Yahiya, a volunteer with the White Helmets rescue organisation, was on call when the bombardment of Muhanbel, his hometown, started on Sunday.

“We asked someone where the strike was and he said: ‘Abu Asem’s house,’” said Yahiya. “I started yelling: ‘Drive faster! My children are under the rubble!’”

Accustomed to pulling other parents’ children from the rubble, Yahiya never imagined he would one day have to rescue his own.

On arriving at the scene, he searched desperately for his three children and his wife, who is five months pregnant.

“When we started digging, I thought to myself: ‘How would I continue my life without them?’ I was searching for what might be our last farewell,” he said.

It wouldn’t be goodbye. Yahiya and the other first responders listened for the panicked screams of his trapped children and, within two hours, managed to dig them out from what remained of their home.

Speaking from the hospital in Darkush where his family was being treated for their injuries, Yahiya said he feared the worst wasn’t behind them.

“We are safe for now, but we don’t know if the bombing will get worse,” he said.

The latest outbreak of violence in Idlib province and neighbouring Hama has left dozens of people dead and forced tens of thousands to flee their homes. Russian and regime aircraft have killed more than 100 civilians in the area since 20 April, according to the UK-based Syrian Observatory for Human Rights.

The joint Syrian-Russian assault on Idlib is the most serious outbreak of violence since September, when Turkey – which supports the opposition – and Russia set up a buffer zone meant to avert a massive regime offensive. Under the agreement, Turkish and Russian troops have monitored a demilitarised zone that also covered parts of Latakia, Aleppo and Hama. 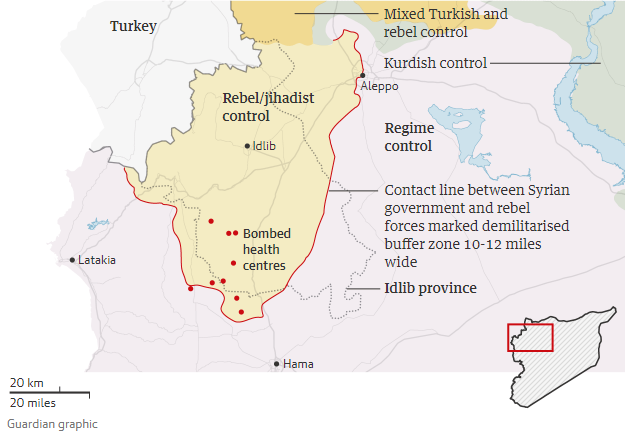 On Monday, state news agency Sana reported the Syrian army had “expanded their retaliation” in response to opposition attacks. The increase in air attacks has stoked fears of a full-fledged bloodbath in the rebel-held enclave.

“If the bombing continues, I’m afraid we won’t be able to continue our work,” said Dr Muhammad Abrash, a surgeon in Idlib.

Airstrikes have already destroyed 12 hospitals and clinics in the region, according to monitoring groups. In Hass, hospital staff evacuated their underground facility, which served an area of 200,000 people, before it was bombed out of operation on Sunday.

Overwhelmed and under-resourced, Abrash says his hospital has put routine procedures on hold and is instead prioritising the dozens of injured patients they are receiving each day. The most severe cases, he says, are sent to neighbouring Turkey.

Last Thursday, Muhammad Salhab, a local journalist, narrowly avoided injury in the town of Ehsim. At home with his parents, wife and infant son, Salhab heard reports that regime aircraft were targeting the area with barrel bombs. The devices, dropped from helicopters, consist of containers filled with explosives and metal shrapnel. They kill indiscriminately.

As soon as Salhab heard the roar of the helicopter blades, he knew the sounds of an explosive barrel would follow.

“I thought I had become deaf,” Salhab said of the barrel bombs. “But then I realised that I could hear the voice of my mother screaming.”

The first one, Salhab estimates, landed about 200 metres away from his house. The second was so close he could taste the dust in his mouth.

In recent years, Idlib has become a final refuge for Syrians who have fled regime offensives elsewhere in the country. Of the 3 million people who live there, roughly half are internally displaced.

The overcrowded province is the last remaining rebel stronghold, and is currently dominated by the hardline militant group Hay’at Tahrir al-Sham (HTS), which took control in January.

According to activists reached by the Guardian, many civilians are increasingly frustrated by the actions of the Salvation government, as the administrative arm of HTS styles itself. A photo posted on social media that showed HTS officials enjoying a lavish meal amid the bloodshed was not well received.

One Idlib resident, who asked not to be identified, pointed out that HTS hasn’t opened up its spacious government.

buildings to displaced families in need of shelter.

In the past week alone, more than 150,000 people have fled the fighting, according to Union of Medical Care and Relief Organizations, which supports hospitals in the area.

Among them was Ammar Hamoud, who was at home with his family in the Jabal al-Zawiya region of Idlib when the bombing started.

“Warplanes are hovering the sky while I am speaking with you,” he said on Friday from the nearby town of Ariha, where his family is now living. “I’m so exhausted. I don’t know what to say.”

Hamoud says all but a few of the 4,000 people living in his village fled when the air raids started last week.