For many Syrians, de Mistura’s claim is not only inaccurate, it is an affront to the reality they endured throughout de Mistura’s tenure, during some of the most brutal and deadly stages of the Syrian conflict 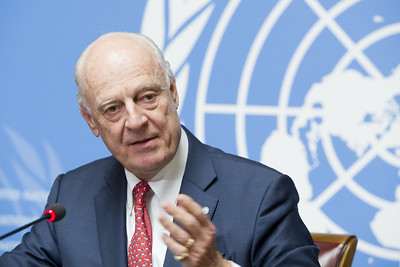 Speaking at an event in London earlier this month, Staffan de Mistura, the former UN Special Envoy to Syria, told the audience his ‘real reason’ for resigning: “I felt the war territorially was leading to an end and having really fought against what happened in Aleppo, in Idlib, in Daraya, I could not be the one that is shaking Assad’s hand and saying malesh [Arabic for ‘it’s okay’].” Nevertheless, de Mistura claims that his actions as Special Envoy helped to save some 700,000 lives in Syria.

For many Syrians, de Mistura’s claim is not only inaccurate, it is an affront to the reality they endured throughout de Mistura’s tenure, during some of the most brutal and deadly stages of the Syrian conflict. “We felt that everything he had done was to mislead the [Syrian] community,” says Hamza al-Kateab, a doctor who managed the last hospital operating in Eastern Aleppo under government siege. At a showing of the documentary For Sama, al-Kateab criticized de Mistura’s leadership throughout the battle for Aleppo, in which more than 31,000 people were killed between 2012 and 2016. Most frustrating for doctors like al-Kateab, the UN seemed oblivious to the government’s deliberate attacks against hospitals. Throughout the siege of Aleppo, it continued to push hospitals in Aleppo to disclose their coordinates for its now widely assailed ‘humanitarian deconfliction’ effort. Hamza’s own hospital was destroyed by pro-government airstrikes during the siege; the relocated hospital was only able to survive because they resisted UN pressure to disclose its location.

De Mistura’s claim of saving 700,000 lives likely rests on his assumption that coordinated population transfers and de-escalation zones were effective solutions to prevent civilian deaths. But as SJAC has previously written, these policies simply forced civilians to flee from one deadly zone to another, while de-escalation agreements broke down one by one following repeated violations by Damascus. It is now clear that the Syrian government had no intentions of moving towards a comprehensive ceasefire, and was cynically using de-escalation agreements to concentrate its resources in re-taking one area at a time. Nevertheless, the UN’s efforts to revive de-escalation zones persisted.

More than taking an unjustifiably equivocal stance with regard to government violations, de Mistura’s office helped to distort the extent of the government’s crimes in the public narrative. To keep the Syrian government at the negotiation table, de Mistura uniformly criticized pro-government and opposition forces, presenting both sides as equal perpetrators of crime despite the former’s responsibility for the overwhelming majority of civilian casualties. In the lead up to the government’s ongoing assault on Idlib, de Mistura asserted that al-Nusra had the potential to use chemical weapons, reiterating a pro-government claim that helped to muddle the evidence of the government’s culpability in 98% of chemical attacks (the remaining 2% have been attributed to ISIS). These capitulations to the government’s demands effectively neutralized the UN in the face of Russian and Syrian government war crimes.

As bombs continue to fall on civilians and hospitals in Idlib, and those who were evacuated from Aleppo, Ghouta, and other besieged areas find themselves again in the crosshairs of the government’s indiscriminate bombs, UN officials need a reality check on how their actions and words are interpreted by victims on the ground. Speaking to CNN in a subsequent interview this month, de Mistura added that “without the UN, in other words, without the capacity to put a face-saving formula for everyone, you will not have sustainable peace.” This is a deeply misguided view of the UN’s role in Syria. What Syrians need now is not a face-saving formula, but an international institution that will fight for their needs and stand by the principles of justice and human rights.

Rather than indulging in face-saving and self-laudatory statements and efforts, the UN needs to support Syrian victims on the issues that matter. This includes: clear action against the continued onslaught in Idlib; identification of Syrian and Russian forces for culpability in their deliberate attacks against medical facilities; demands for the release of political detainees and information on forcibly disappeared persons; and calls for the safe return of forcibly displaced persons.

De Mistura’s successor, Geir Pedersen, has laudably made significant strides in consulting the Syrian community and highlighting key issues such as detainees and missing persons. However, these efforts now threaten to be overshadowed by the recent formation of the constitutional committee, the membership of which was largely determined through the Russian-led ‘Astana process’. Syrians are doubtful that a new constitution would lead to meaningful change in the absence of a genuine political transition. Meanwhile, Assad has already made clear that Damascus will not be legally bound by any decisions made by the committee. These efforts, however, have not stopped UN officials from lauding the committee as a breakthrough. UN Secretary General Antonio Guterres called its formation “a landmark, a foundation for progress, and in itself a clear success of mediation.” Pedersen, in turn, said that the committee should be “a sign of hope for the long-suffering Syrian people.”

To learn the lessons of de Mistura’s tenure, Pedersen and the UN must now be honest about its current position and past failures. This includes the limitations of the constitution committee, the unaddressed issue of accountability, and the need for political reform and transitions. The UN cannot seek an easy solution by whitewashing the Syrian government’s violations over the past eight years, nor the UN’s failure to prevent them. Without accounting for the past, the UN’s perspective on Syria will continue to be fundamentally at odds with the Syrian communities victimized in the war.