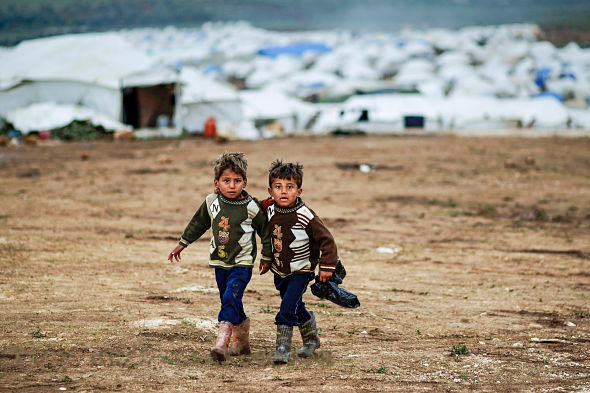 The Syrian Network for Human Rights states in its report released today that the Syrian regime continues to pose a violent barbaric threat and that Syrian refugees should never return to Syria after documenting the disappearance of at least 638 forcibly returned refugees, and the deaths of 15 due to torture.

As the 21-page report explains, the widespread human rights violations that have taken place in Syria since the beginning of the popular uprising for change and democracy in March 2011, which is still ongoing, include the use of aerial bombardment using, inter alia, barrel bombs and cluster munitions, also extending to the repeated use of chemical weapons, and the tripartite strategy of arrest, enforced disappearance, torture have been the direct and main reason behind the displacement of more than half of the Syrian people as both IDPs and refugees.

The report notes that the entry of other parties into the Syrian conflict, such as Shiite and Sunni extremist organizations, the Kurdish Democratic Union Party (PYD) forces, factions of the Armed Opposition, the Global Coalition to Defeat ISIS, and the Russian forces, has contributed to the forced displacement of more people internally and externally, but the practices and violations by the Syrian authorities have remained the largest cause of the displacement of Syrians.

The report sheds light on the most notable violations by Syrian Regime forces against Syrians who decided to return from their places of displacement or from the countries of asylum in which they resided, in particular arbitrary arrests, enforced disappearances, death due to torture, and forced conscription into the regime forces for some refugees, in addition to looting of their property and confiscating their houses, as well as the severe shortage of services they faced in the areas to which they returned. The report also includes the most notable of the violations committed by Syrian Regime forces since 2014, the year in which we recorded the escalation of targeting of returnees with arrests, up until August 2019.

“No-one can guess what will happen to a refugee who wants to return to Syria. He may be allowed to enter the country. He may be arrested after a period of time without explaining any reason, as is usual for the security services, and may disappear later, and we may get information that he died due to torture. It is impossible to discover whether the refugee is wanted by all security services; this is a very complicated process that requires huge amounts of money. The Syrian state under the current regime has become a mafia authority, and we warn refugees of the risk of returning, and call on all states to respect customary international law and not to forcibly return anyone because that state will bear responsibility for what might happen with them.”

The report, which took eight months of work, reveals the falsity of the Russian statements, and the extent of the horror and the threat that awaits the refugees returning to the areas of Syria under the control of the Syrian regime. The report contains 10 accounts, which SNHR obtained through visits and direct interviews or by speaking via many means, such as phone or smartphone apps and social media platforms.

As the report explains, the Syrian regime and its Russian ally have worked systematically to destroy the people’s ability to continue to live in areas outside its control, and to impose a monstrous equation of either accepting the Syrian regime’s subjugation or being subjected to death, destruction and chaos. These harsh living conditions have undoubtedly prompted thousands of Syrians over the years to flee to areas under the control of the Syrian regime, risking their lives by returning as by remaining. The report also outlines the horrendous living conditions that refugees are enduring, particularly in the countries bordering Syria, given the decline in the level of support and services, the high levels of threats and racism against refugees, who are being held responsible for problems over which they have no control, such as water and air pollution, elections and garbage, without taking into account that these refugees were forcibly displaced in the first place, and that most of them have lost their homes, possessions and jobs due to the crimes of the most brutal regime of the modern age.

The report further reveals that the percentage of those who returned to the total number of refugees does not exceed 6 percent at most, which is the rate of “voluntary” return of refugees from Lebanon; this is far lower in Jordan, with barely 2 percent of the refugees there returning, which indicates definitively that there is no confidence among refugees in the current ruling Syrian regime, its security apparatus, or the Russian and Iranian militias supporting it. The report notes that the attempts to flee Syria and to seek refuge in other countries worldwide continue, stressing that the situation will continue indefinitely in light of the absence of any prospect of a just political settlement that fulfills the most basic demands of the Syrians to hold the perpetrators of crimes against humanity accountable and to dismiss the government and the regime.

From the beginning of 2014 up until August 2019, the report reveals, SNHR has documented at least 1,916 cases of arrests, including 219 children and 157 women (adult female), among refugees who returned from countries of asylum or residence to their areas of residence in Syria, all of whom were detained by Syrian Regime forces. The Syrian regime released 1,132 individuals who returned, while 784 others remained in detention, of whom 638 were forcibly disappeared. Furthermore, the report records the deaths of 15 of these detainees as a result of torture, with 11 of those killed under torture having returned from Lebanon, noting that even after the Syrian regime released 1,132 of these returning refugees, it detained a number of them again, forcing them to join the military forces via enforced conscription, with detention of returnees has been concentrated directly at the border crossings.

The report also notes that at least 426 of the IDPs who returned to areas controlled by the Syrian regime were documented as having been detained, including 13 children and 11 women. The Syrian regime released 119 of those detained, while 307 others remained in detention, of whom 284 were forcibly disappeared, and two of these individuals died due to torture, noting that even after the Syrian regime released 119 cases, it detained a number of them again, and forced them to join the regime military via enforced conscription. According to the report, these arrests were concentrated in the eastern suburbs of Hama and Idlib governorates, which are under the control of the Syrian regime, as well as in Aleppo city, and in Damascus Suburbs governorate in general, and in the Eastern Ghouta area in particular.

The report further draws attention to the destruction inflicted on residential buildings, vital facilities and infrastructure through indiscriminate bombardment carried out by the Syrian regime and its Russian ally with barrel bombs, missiles, artillery shells, and mortars, in addition to noting that the Syrian regime has legalized the theft and expropriation of land and property, opening the door wide to its armed forces and affiliated local militias to carry out large-scale theft and looting of the areas that have been displaced after storming them. In addition to these crimes, the report explains, the regime has further legitimized the expropriation and theft of properties through introducing legislation that fundamentally violates and disregards international human rights law and violates the most basic property ownership rights of Syrian citizens, such as: (Law 63 of 2012, Decree 66 of 2012, Decree 19 of 2015, Decree 11 of 2016, Decree 12 of 2016, Decree 3 of 2018, Law No. 10 of 2018, amended to the Law 42 of 2018). According to the report, these decrees constitute a major obstacle to the return of refugees and IDPs, amounting to enforced evictions and to an effort to manipulate demographics and social structures, stressing that the basic and only acceptable solution and response to the regime’s criminal actions remains in the total popular rejection of these authoritarian, wholly unjust laws and the exposing of the practices and underhand behavior of the ruling authorities.

The report points out that the Syrian regime takes advantage of the return of refugees and IDPs to forcibly conscript them by giving those returning a period of between 15 days and three months to be able to notify the recruitment departments; however, it explains the regime security forces have not complied with these terms, adding that there have been regular detentions of refugees and IDP returnees, despite their possessing documents proving that they had not passed this deadline.

The report emphasizes that the Syrian regime is trying to benefit as much as possible from the return of refugees and IDPs by using them in recruitment operations, and as a propaganda tool to suggest that the country is in a stable condition, adding that the Russian regime also wishes to present this misleading image in order to obtain reconstruction funding from the international community, and noting that the Syrian regime has made no efforts to rehabilitate the infrastructure and services in the areas where it has reimposed control with the support of Russia.

The report stresses that Syrian authorities have committed several types of violations that amount to the level of crimes against humanity, including extrajudicial killings, torture, sexual violence and enforced disappearance, according to reports by the Independent International Commission of Inquiry, along with other types of violations which reach the level of war crimes such as indiscriminate bombardment, the shelling of hospitals, schools, siege, the use of chemical weapons, cluster munitions, barrel bombs and so on; all these violations have resulted in the dispossession and displacement of nearly half of the Syrian population, either as IDPs or refugees.

In addition to these crimes, the report notes, several other fundamental rights of these IDPs and refugees have also been violated by the Syrian authorities, which have also clearly violated Principle 21 of the UN Principles on Housing and Property Restitution for Refugees and Displaced Persons, and Principle 28 on the establishing of conditions for the return of displaced persons.

The report recommends that the UN High Commissioner for Refugees (UNHCR) notify refugees of the dangers of return in the absence of any change to the ruling regime in Syria, that it periodically alert refugees to this danger and urge them to place no trust in the promises of the Russian regime, asserting that it should ensure the protection of refugees upon their return to Syria, more especially for those refugees who contributed to the popular uprising calling for the overthrow of the regime and the government, and that it should also closely monitor the situation of refugees who have returned to Syria and to report on the violations they have suffered.

The report calls on the Security Council to find a just political solution that safeguards the rights of these displaced and protects their properties from the looting being carried out by the government and the current regime. The report also urges the United Nations and its various constituent organs to make far greater efforts to expose the systematic looting and social and demographic changes being carried out by the Syrian government and regime.

The report calls on the countries of asylum to end the racist harassment campaigns against Syrian refugees that leads them to feel forced to return and thereby risk arrest, enforced disappearance or fatal torture, urging these nations to assume their responsibilities in this regard and to stop forcibly returning Syrian refugees which fundamentally violates the principle of non-refoulement in customary international law, which is binding on all states.

The Syrian Network for Human Rights