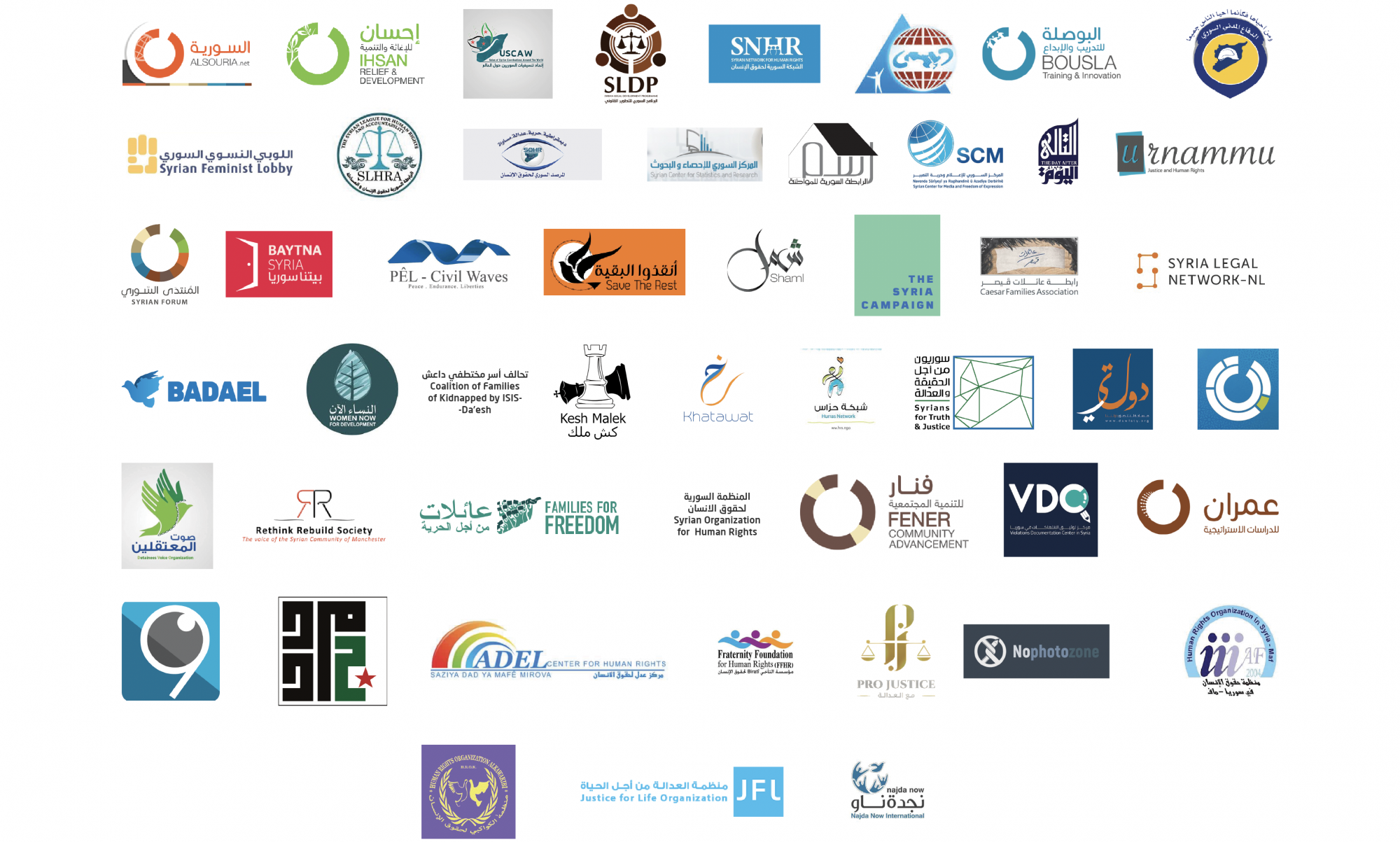 Fifty Syrian non-governmental organizations which focus on advocacy, justice, and human rights, including our Pro-justice, have sent a letter regarding the hundreds of thousands of families who strive for information on their missing loved ones during the ongoing conflict in Syria. The letter were sent to the Secretary-General of the United Nations and representatives of States members of the Security Council, as well as the Special Envoy to Syria. Copies of the letter were also sent to the Office of the High Commissioner for Human Rights, the International Committee of the Red Cross Special Rapporteur on extrajudicial killings, mass executions, the Office of the Working Group on Arbitrary Detention and the Office of the Working Group on Enforced Disappearance.

Below is the text of the letter, which was drafted and coordinated by the Syrian Center for Media and Freedom of Expression, is below:

While the tragedy of hundreds of thousands of families who keep looking for any information about their missing loved ones during the ongoing conflict in Syria is still going on, a new glimmer of hope emerged as the Security Council issued its first resolution on the question of missing persons on Tuesday, June 11, 2019. Unanimously, the UNSC reaffirmed the priority of the issue of missing persons in armed conflict in a new international attempt to put an end to the instrumentalization of enforced disappearance in armed conflict.

We, the signatory civil organizations, welcome the advanced step taken by the Security Council and at the initiative of the State of Kuwait, to adopt the unprecedented resolution No. S/RES/2474 on the issue of missing persons and disappeared in armed conflict. We call upon, member-States to the Security Council and States supporting Human Rights and peaceful resolution to armed conflicts, to pressure the parties to the conflict in Syria to take clear and concrete measures in response to the provisions of the international resolution by revealing the fate of thousands of kidnapped and missing persons, and ensuring the establishment of an independent and transparent investigation and accountability mechanism under international supervision and guarantees a fair and transparent accountability and punishments to perpetrators.

Today, undetermined number of Syrians remain unaccounted after being subject to arbitrary arrest and enforced disappearance. Their families are still waiting for any notification or information about the whereabouts and condition of their loved ones. And while the Syrian government is progressively and unofficially cleansing its records through issuing death notices and death certificates for missing persons after years of disappearance while security and judicial authorities in Syria refrain from opening an independent and transparent investigation into the causes of their death, the place and circumstances of the disappearance,  or releasing their remains. In this regard, we demand from your respected council to assume its active role on this issue and to exert all possible efforts to put an end to these practices as to the policies of impunity standing against any possibility of sustainable peace in Syria.

As adopting the resolution unanimously reflects an advanced international will to address the issue of the missing persons in Syria and other war torn countries, we, as part of the civil society forces around the world, look forward to an effective role for the United Nations and the Security Council’s member States to remain seized of the matter and follow up closely the situation of the missings and detainees, victims of Daesh, the government and armed factions, and to pressure all warring parties and their allies to fully and unconditionally cooperate in revealing the fate of detainees and missing persons and identify perpetrators as a first step to achieving justice and building the State of rule of law in Syria.

As we look forward to the Secretary-General of the United Nations annual briefing on the issue of missing persons around the world and in Syria, we emphasize the need for partnership and cooperation between the civil and independent forces and the relevant UN institutions. We believe that genuine cooperation will have a great impact on resulting more concrete and comprehensive briefings and periodic reports of the secretary general on this subject. Keeping this question of missing persons as the utmost priority to reach and consolidate world peace, as an indispensable prerequisite for sustainable community cohesion and mainstreaming rule of law and fighting impunity as a mean to put an end to the use of enforced disappearance as a weapon of war.

We, as civil organizations engaged in countering the war machine, and the dire situation resulting from the armed conflict and documenting human rights violations in syria; including arbitrary arrests and forced disappearances in context of military, political and societal polarization, reiterate the need to convene a special session of the Security Council on The issue of missing persons and detainees in the ongoing armed conflict in Syria, calling for a road map that responds to the provisions of the resolution and thus undertakes: