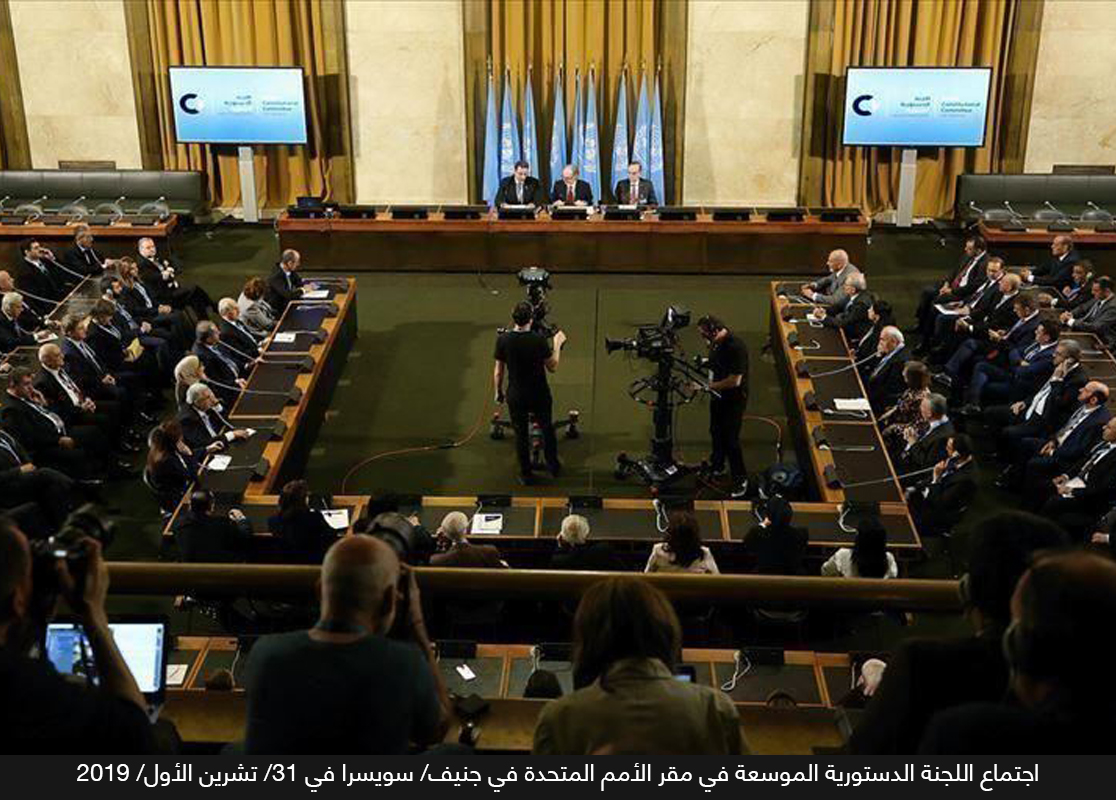 The Syrian Network for Human Rights (SNHR) has issued a report documenting the most notable violations committed by the parties participating in the Constitutional Committee within the first week of its sessions, indicating that the continuing perpetration of war crimes by the Syrian regime and its allies is further evidence of insulting the constitution and the international community.

The 15-page report notes that the Sochi Conference of Russia, held on January 30, 2018, constitutes the reference for the formation of the Constitutional Committee, arguing that this is the main way to end the conflict, even though the Syrian political opposition refused to participate in that conference. The idea of the Constitutional Committee was later adopted by former international envoy Staffan de Mistura, with the current UN envoy to Syria, Mr. Geir Pedersen, following the same path.

The report outlines the context in which the Constitutional Committee Large Body was formed, which began on October 30, 2019, consisting of 150 members (50 of them from the Syrian government, 50 members representing the opposition and 50 representatives of civil society organizations selected by the UN envoy’s office according to undeclared policies and determining factors which are set by the UN envoy and are frankly incomprehensible, with this group containing figures with no knowledge of constitutional law, human rights, transitional justice, etc.) The report adds that Mr. Pedersen announced an agreement on the formation of the Syrian Constitutional Committee Small Body on November 1, 2019, to begin its work on November 4, with Mr. Pedersen stating that this process would take no longer than a week.

This report aims to outline the most notable violations that the SNHR team was able to document committed by the parties involved in the Constitutional Committee (Syrian Regime forces, the regime’s Russian ally, and factions of the Armed Opposition) during the week since the start of the Committee’s sessions on October 30, up until November 6, 2019; due to these criteria, this report does not include any data on violations by Syrian Democratic Forces, the US-led International Coalition forces, or the Operation Peace Spring forces (Turkish forces and the Syrian National Army) during this period.

The report explains that most of Syrian society expected that the frequency and severity of violations committed against it would decrease after the constitutional process began. The constitutional process usually takes place after the cessation of conflict and the start of negotiations, until the parties involved reach a mutually agreeable settlement after which they draft a constitutional declaration document based on this. In Syria’s case, however, the conflict is still ongoing, and the Syrian regime and its allies continue to perpetrate various types of violations, with some of these constituting crimes against humanity and others constituting war crimes; these ongoing atrocities include torture inside detention centers and regular bombardment of vital facilities, most notably medical centers. In addition, the fate of the forcibly disappeared hasn’t been revealed by the negotiating parties.

In the first week since the sessions of the Constitutional Committee began, the report documents violent and indiscriminate bombardment in many locations, carried out by Syrian Regime forces in the southern suburbs of Idlib and the western suburbs of Hama, with an increase in the frequency of bombardment in and around the cities of Kafranbel and Jisr al Shoghour in Idlib suburbs. Anadan city in the north of Aleppo governorate has also seen a significant increase in the frequency of ground attacks in the last three days. The number of ground attacks the report documented during this week-long period was approximately 162 attacks.
In addition, on November 4, the report recorded the first fixed-wing raid by Syrian Regime forces in nearly six weeks. According to the report, at least 11 raids were carried out on the fourth de-escalation zone, mostly in the western suburbs of Idlib governorate since that date.

The report notes that although the Constitutional Committee is a Russian idea, while the Geneva sessions have been taking place, Russian forces have been conducting fierce and concentrated bombardment on several towns in the southern and western suburbs of Idlib, totaling approximately 46 raids.

As the report further states, Syrian Regime forces have continued their policy of arrests during this week, which have been concentrated mainly in Damascus Suburbs governorate, primarily targeting people who had previously settled their security situation.
Also, the report notes, the displacement movement in the Idlib area during this period has been very small and limited to the southern suburbs of Idlib and the towns of the western suburbs of Idlib, with almost all the areas that were bombed already having been emptied of their residents.

The report outlines the most notable violations committed by Syrian Regime forces and their Russian ally since the start of the sessions of the Constitutional Committee on October 30 up to November 6, 2019.

The report also records 19 cases of arrests by Syrian regime forces in the period covered by the report, in addition to at least 15 incidents of attacks on vital civilian facilities by the Syrian-Russian alliance forces, including two on schools, two on medical facilities, one on a place of worship, and six on Civil Defense Centers (facilities and vehicles), Syrian regime forces were responsible for 12 attacks while Russian forces carried out three attacks.

The report notes that no incidents of bombardment causing material or human casualties were recorded by factions of the Armed Opposition on areas controlled by the Syrian regime during the period covered in this report.

The report stresses that the Syrian-Iranian-Russian alliance forces have undoubtedly violated UN Security Council Resolutions 2139 and 2254 which ordered a cessation of indiscriminate attacks, as well as violating a wide range of customary international humanitarian law rules, and also violating articles 7 and 8 of the Rome Statute by committing intentional homicide, all of which crimes constitute war crimes and crimes against humanity.
The report also notes that the incidents of bombardment have incidentally caused civilian casualties, including injuries, as well as causing significant damage to civilian objects. There are very strong indications suggesting that this damage was extremely excessive in comparison to the intended military benefit, with the attacks failing to discriminate between civilians and military personnel in most cases. Also, it seems that some of the attacks appear to have deliberately targeted vital facilities and civilian areas.
The report further notes that the report issued by the delegates to the 2005 Summit states unanimously that each country has a responsibility to protect its population from crimes against humanity and war crimes. This responsibility entails the prevention of such crimes, the prevention of incitement to commit them by all possible means, and when the state clearly fails to protect its population from egregious crimes, or itself is committing such crimes as in the case of the Syrian regime, it is the responsibility of the international community to intervene to take protective measures in a collective, decisive and timely manner.

The report calls on the UN special envoy to Syria to condemn the perpetrators of crimes and massacres, and those who are primarily responsible for obstructing the political process, and to re-sequence the peace process so that it can resume its natural course after Russia’s attempts to divert and distort it, empowering the Constitutional Committee prior to the establishment of a transitional governing body, and stresses the importance of requesting that the Syrian regime, its Russian ally, and opposition factions to stop all violations and secure good faith measures by stopping the bombing and at least to disclose the fate of the forcibly disappeared persons.

The report calls on the Security Council to take additional steps following its adoption of Resolution 2254, and stresses the importance of referring the Syrian case to the International Criminal Court, adding that all those who are responsible should be held accountable including the Russian regime whose involvement in war crimes has been repeatedly proven.
The report stresses the need to ensure peace and security and to implement the principle of responsibility to protect civilians’ lives and to save the Syrian people’s heritage and historical artefacts from destruction, looting and vandalism, calling on all relevant United Nations agencies to make greater efforts to provide food, medical and humanitarian assistance in areas where fighting has ceased, and in internally displaced persons camps, and to follow up with those States that have pledged voluntary contributions.

In light of the split within the Security Council and its utter inability to take any effective action, the report stresses the need to taking action on the national and regional levels to form alliances to support the Syrian people by protecting them from daily killing and by lifting sieges, as well as by increasing support for relief efforts. Additionally, the principle of universal jurisdiction should be enacted in local courts regarding these crimes in order to conduct fair trials for all those who were involved.
The report calls for the implementation of the ‘Responsibility to Protect’, stressing the need to resort to Chapter VII, and implement the norm of the ‘Responsibility to Protect’, which was established by the United Nations General Assembly. The Security Council is still hindering the protection of civilians in Syria.

The report recommends that the OHCHR should submit a report to the Human Rights Council and other organs of the United Nations on the incidents mentioned in this report since these attacks were perpetrated by the parties to the conflict, should train Syrian organizations to undertake clearance of mines and other unexploded ordnance, and raise local awareness of the dangers of such ordnance, and should establish a platform that brings together a number of Syrian organizations active in documenting violations and humanitarian assistance, in order to facilitate an exchange of skills and experiences within Syrian society.

The report calls on the Independent International Commission of Inquiry (COI) to launch investigations into the cases included in this report and previous reports, and to clearly identify those responsible for the attacks in the event that results reached are likely, especially Russian forces; the reports of the Independent International Commission of Inquiry on the Syrian Arab Republic are virtually devoid of accidents that are responsible for air strikes, with the exception of only one in three years of Russian intervention in Syria.
The report also stresses that the Syrian regime must stop violating the Syrian constitution by killing Syrian citizens, destroying their homes and disappearing and torturing tens of thousands of them, stop the indiscriminate shelling and targeting residential areas, hospitals, schools and markets, as well as ending the acts of torture that have caused the deaths of thousands of Syrian citizens in detention centers, and complying with UN Security Council resolutions and customary humanitarian law and the Syrian constitution and law.
The report recommends that the Russian regime should launch investigations into the incidents included in this report, make the findings of these investigations public for the Syrian people, and hold the people involved accountable, as well as demanding that the Russian regime should compensate all the damaged centers and facilities, to rebuild and rehabilitate them, to compensate all the families of victims who were killed by the current Russian regime, as well as all the wounded, and to completely cease the bombing of hospitals, protected objects, and civilian areas, and respect customary international law.