At least 4,671 Cases of Arbitrary Arrests Documented in 2019 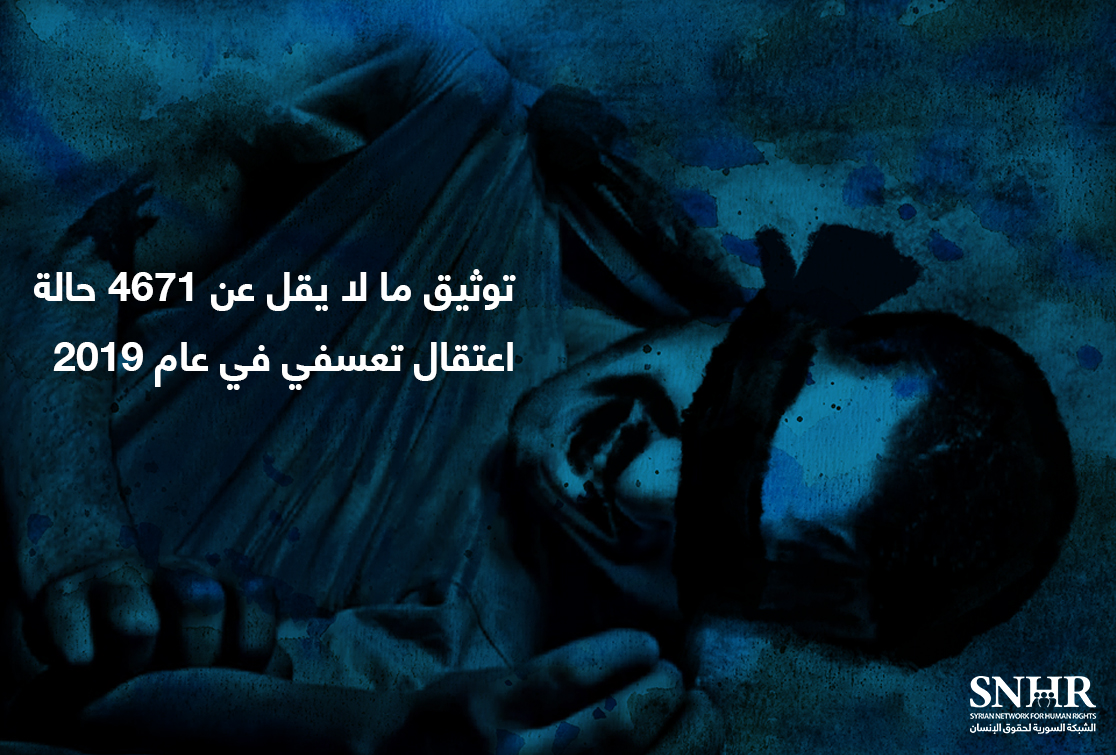 SNHR announced in its report released today that it documented at least 4,671 cases of arbitrary arrests in 2019, including 178 in December.

Arbitrary arrests and enforced disappearances have been amongst the most common and widespread violations since the early days of the popular uprising for democracy in Syria in March 2011. As this report states, these violations, which have affected hundreds of thousands of Syrians, are carried out by the Syrian security services, as well as their affiliated militias, as part of a deliberate and planned strategy, often in a sweeping indiscriminate manner, in order to instill terror and fear into the largest possible number of Syrian people. Approximately eight months after the start of the popular uprising, other parties began to emerge in Syria, carrying out similar arrests and kidnappings, though the regime has remained by far the largest offender.

The report reveals that since 2011, the Syrian Network for Human Rights has created complex electronic programs to archive and categorize the detainees’ data, which the team collects and verifies, enabling us to catalogue the detainees according to gender, the location where each was arrested, the governorate from which each detainee originally came, and the party responsible for the arrest. These programs also enable us to cross-index cases and make comparisons between these parties, as well as identifying the governorates where the largest proportion of their residents were arrested and disappeared.
As the report explains, most of the arrests in Syria are carried out without any judicial warrant while the victims are passing through checkpoints or during raids, with the security forces of the regime’s four main intelligence services often responsible for extra-judicial detentions. The detainee is tortured from the very first moment of his or her arrest and denied any opportunity to contact his or her family or to have access to a lawyer. The authorities also flatly deny the arbitrary arrests they have carried out and most of the detainees are subsequently categorized as forcibly disappeared.

The report explains that the SNHR abides by strict standards in evaluating and assessing any incident of arbitrary in accordance with the principals of international laws and the aforementioned principles on arbitrary arrest. The report relies on cross-checking information from various sources, such as: victims’ families, SNHR members in Syrian governorates, cooperating local activists, and former detainees, before diligently working to contact the families of the detainees and forcibly disappeared persons, as well as people close to them and people who survived detention, for the purpose of collecting as much information and data as possible, in light of the extraordinary and extremely complex challenges.

This report documents the record of arbitrary arrests by the parties to the conflict in 2019, particularly in December 2019. In addition, it records the most notable raids and arrests at checkpoints during this period that resulted in deprivation of freedom, as well as shedding light on the most notable individual cases and incidents of arbitrary arrest that the SNHR’s team documented in 2019 and in December in particular, in addition to categorizing cases and incidents of arrest according to the location of the incident.

The report also documents arbitrary arrests that were subsequently categorized as enforced disappearances. A number of criteria must be met before SNHR will classify a case as an enforced disappearance: the individual must have been detained for at least 20 days without his or her family being able to obtain any information from the relevant authorities about their status or location, with those responsible for the disappearance denying any knowledge of the individual’s arrest or whereabouts.

The report also shows the distribution of cases of arbitrary arrests by governorate in 2019, with Aleppo seeing the largest number of arrests documented during this period, that is, according to the report, due to its unique status compared to other Syrian governorates in having the largest number of the parties involved in the Syrian conflict present there, with the highest rate of cases of arbitrary arrests in December was also seen in Aleppo governorate.

In addition, the report states that at least 75 raids and checkpoints across all Syrian governorates resulted in cases of deprivation of freedom being documented in December, most of which were in the governorate of Aleppo, with Syrian Regime forces, followed by factions of the Armed Opposition, being responsible for most of the raids.

The report stresses that the Syrian regime has not fulfilled any of its obligations in any of the international treaties and conventions it has ratified, most particularly the International Covenant on Civil and Political Rights. It has also violated several articles of the Syrian Constitution itself, with thousands of detainees detained without any arrest warrant for many years, without charges, and prevented from appointing a lawyer and from receiving family visits. 65.08 percent of all detentions documented have subsequently been categorized as enforced disappearance cases, with detainees’ families being denied any information on their loved ones’ whereabouts, while anyone making enquiries about the detainees faces the risk of being arrested themselves for doing so.

The report states that Hay’at Tahrir al Sham imposes absolute authority over the large areas it controls and the residents there. The group which has a political entity, and has developed a highly hierarchical structure, is therefore obliged to implement the provisions of international human rights law. Hay’at Tahrir al Sham has committed widespread violations through arrests and enforced disappearances.

The report also states that Syrian Democratic Forces have violated many basic rights and practiced numerous violations including torture and enforced disappearance. They have also a political entity with a largely hierarchical structure and are, therefore, also obliged to implement the provisions of international human rights law.

The report further notes that factions of the Armed Opposition have also carried out arrests and torture against a number of residents in areas under their control.

Additionally, the report calls on the Human Rights Council to follow up on the issue of detainees and forcibly-disappeared persons in Syria, to raise this subject in all of the council’s annual meetings, and to coordinate with the active local human rights groups in Syria.

Furthermore, the report calls on the Independent International Commission of Inquiry (COI) and the International, Impartial, and Independent Mechanism (IIIM) to launch investigations into the incidents included in this report and previous reports. The report stresses that the SNHR is willing to cooperate and to provide more evidence and data.

The report stresses that the UN and the guarantor parties at Astana should form an impartial special committee to monitor cases of arbitrary arrest, and reveal the fate of the 98,000 missing persons in Syria, approximately 85 percent of whom are detained by the Syrian regime. The report adds that pressure should be applied on all parties to immediately reveal their detention records in accordance with a timetable, and to immediately make detainees’ whereabouts public, and allow human rights groups and the International Committee of Red Cross to have direct access to them.

Lastly, the report emphasizes that children and women should be released, and families and friends should not be taken as prisoners of war. The report calls on the official newly appointed to take charge of the detainees’ file at the UN special envoy’s office to include the issue of detainees at the upcoming rounds of Geneva talks, as this issue is of far greater importance to the Syrian people than other longer-term issues that can be jointly addressed later, such as the constitution.