Security can not justify annexing land and violating all international conventions, ignoring the rights of indigenous people who are still displaced in Syria

In complete contradiction to Security Council Resolutions 242 and 497; on Monday, March 25th, 2019, the United States announced recognizing the Israeli full sovereignty over the Syrian Golan occupied since 1967. A step that glorifies systematic violations of Human Rights, and legitimizes violations of the General International Law honoring and validating acts of military aggression and its results of displacement, destruction and loss of Rights of Syrians and their properties and land, violations by all parties to the conflict who are still until this moment fighting to over the syrian land and society.

Recognizing, the US decision do not have direct legal impact on the status of Golan as a territories under Israeli occupation, yet this move represents true threat to the future of a possible peace in Syria and the entire region, and strip the United States from its credibility as an unbiased intermediary and partner in the Middle East peacemaking, and raise the need for a comprehensive review of the peace process and the neutrality of its intermediaries and partners.

We, the undersigning civil organizations, movements, groups and initiatives, call upon all parties and States committed to Human Rights and Peace, to stand together and address the normalization of the results of hostilities in Syria and the region; declaring official positions of rejection against all forms of occupation and acquisition of land, and through concrete actions defending the Rights of Syrians, especially the people of Golan and their right of their homeland from which there were displaced since 1967, as their rights are the cornerstone for any solution and the road towards a real sustainable peace in Syria and the Middle East.

Israel committed an act of aggression when attacked the Syrian territories in 1967, seizing control over Golan, and forcibly displacing around 130,000 people – 95% of its original population – and destroyed 240 villages and farms. Today, Israel continue its violations of Human Rights in the occupied Golan in blatant disregard of the international law, including the Hague Regulations and the Geneva Conventions on military occupation. A situation in which the culture of impunity flourish corroborating the persistent horrendous violations of international law committed by warring parties in Syria and the region, and encourage regional expansion through aggression in complete disregard of the Charter and resolutions of the United Nations.

Today, war machine continues displacing the Syrian people across frontlines and temporary and permanent borders between their cities, villages and regions, in the midst of multiplying regional and international alliances and bargains on the fate of the country, which proved to consolidate the de-facto authorities and share of territories of influence and control on the base of military force and demographic engineering.

Welcoming, the recent Human Rights Council resolution (A / HRC / 40 / L.4) of 22 March 2019, we, as civil society bodies, look forward to working with States and Organisations supported this resolution and with forces of democracy and human rights around the world to defend the Rights of Syrians against persistent violations by all parties to the conflict. Yet we worn from the repercussions of normalizing occupation and results of aggression as it represent an existential threat to any peaceful future of peace and human rights in the region, unless  it is confronted with a firm and united international position.

Security can not justify annexing land and violating all international conventions, ignoring the rights of indigenous people who are still displaced in Syria.

The absence of a legitimate government representing Syrian citizens and defending their fundamental rights, should not and can not represent a logical acceptable context for steps that would change the face of a country and its people, cultivating more violence, revenge and impunity.

We, the undersigned organizations, call for a clear and unequivocal international commitment to protect the rights of Syrians in their homeland and to reject all forms of normalization of the results of hostilities and to secure an impartial and transparent international mediation capable of achieving peace in Syria and the region.

Look forward for your support!. 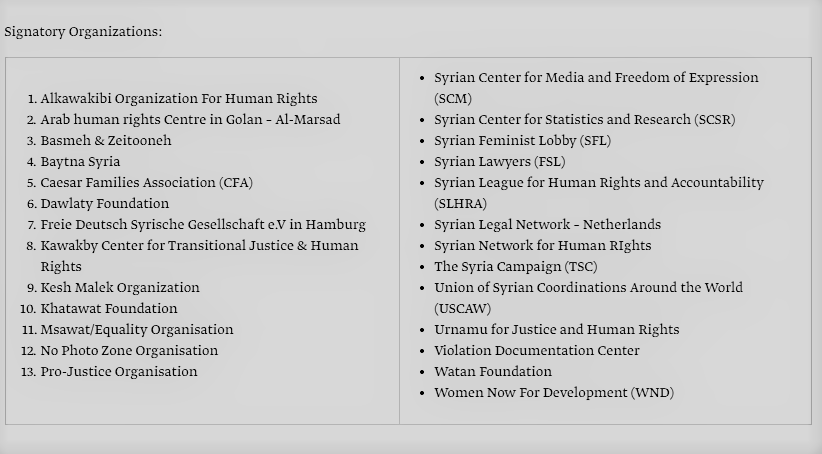