While the vast majority of crimes against journalists have been committed with impunity, there are some possible avenues for justice 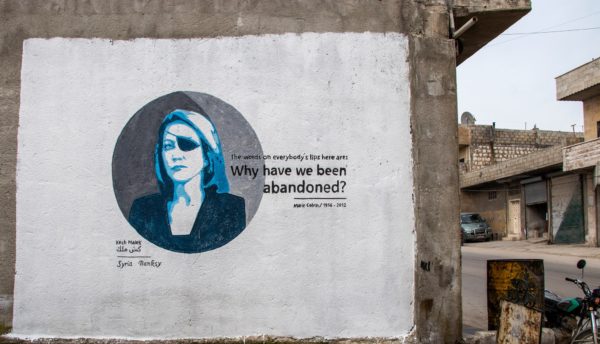 On November 2nd, the UN will observe the International Day to End Impunity for Crimes Against Journalists. Media practitioners and war correspondents are protected by the Geneva Conventions and are entitled to the status and treatment of a prisoner of war in case of capture. However, throughout the conflict in Syria, both local and foreign journalists have regularly been kidnapped, tortured, and killed in violation of international humanitarian law. Estimates vary, but to date approximately 131 journalistshave been killed in the Syrian conflict, with nine currently missing. The vast majority of these crimes have been committed with total impunity. SJAC calls for an end to the targeting of journalists, the release of all detained journalists, and justice for all journalists in Syria who have been detained, tortured, or killed as a result of their profession.

Targeting of Journalists by the Syrian Government

Since the start of the conflict in Syria, the Syrian government has used dangerous rhetoric indicating that journalists are viewed as enemies of the state. In his first speech after protests began, President Bashar al-Assad insinuated that journalists reporting in Syria were planted there by those corroborating against the government, saying “there are people who are well paid to carry out video cameras, film and collaborate with the media.” Government attacks against journalists go far beyond rhetoric however; the government has repeatedly targeted journalists for surveillance, arbitrary detention, and assassination. A document issued by the Air Force Intelligence Directorate and obtained by SJAC shows one example in which the government identified a particular journalist whose reporting it deemed to be “offensive” and placed her phones under surveillance (both inside and outside of Syria). 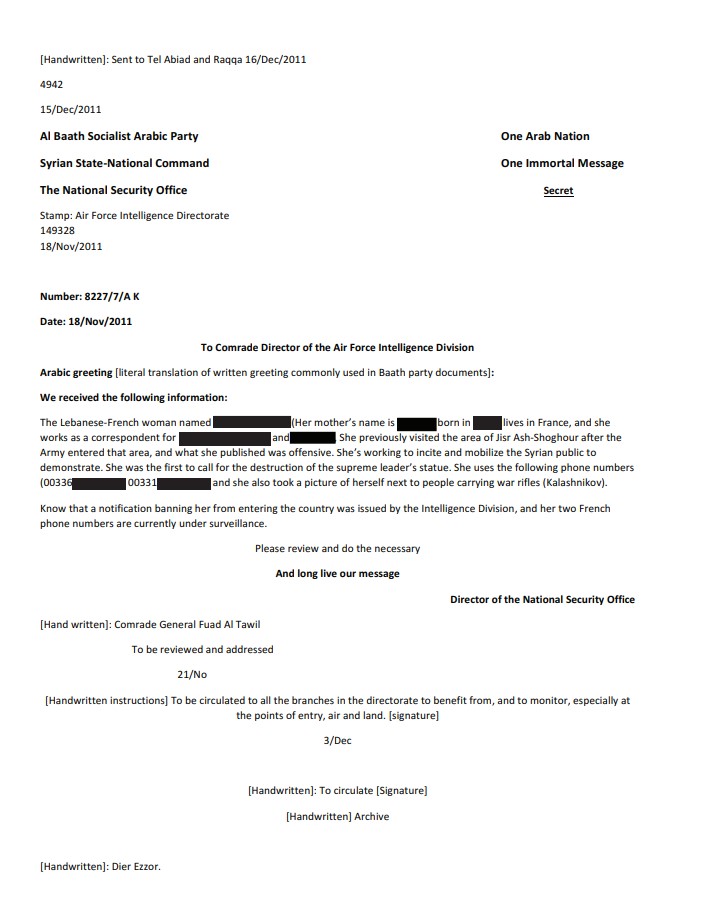 The attack against American journalist Marie Colvin, who was killed by shelling while covering the 2012 siege of Homs, indicates a much more serious crime. After Colvin’s death, information surfaced from a Syrian military defector known as “Ulysses” showing that Colvin had been assassinated by the Syrian government, who ascertained her location from her TV appearances and through collaboration with informants on the ground. Ulysses also shared that the General who oversaw the assassination was promoted to head the Syrian military intelligence department as a result, and the informant who helped locate Colvin and her media team was gifted a new car.

Abduction and Killing of Journalists by Non-State Actors

Violations against journalists have not been limited to the Syrian government, and extremist groups including ISIS and Al-Qaeda affiliates have also been responsible for horrific violations targeting both professional and citizen journalists. Reporters Without Borders reports that ISIS uses intimidation, abduction, torture, and murder to “systematically target journalists and media that do not share their ideology.” One journalist who faced all these tactics at the hands of extremist groups was Raed Fares. Fares was the host of “Radio Fresh,” an Idlib-based independent radio station which at various times was ordered by extremist groups to stop broadcasting music and to ban female speakers on the air. Along with this intimidation, Fares faced numerous threats on his life; he was kidnapped and tortured by Al-Nusra Front militants and shot by ISIS militants outside his home in Kafranbel, leaving him with a punctured lung. Unknown gunmen, believed to be associated with extremist group Hayat Tahrir al-Sham, ultimately assassinated Fares and his colleague Hamoud Juneid in 2018.

While the vast majority of crimes against journalists have been committed with impunity, there are some possible avenues for justice. Marie Colvin’s family has sought justice for her death through a lawsuit, and a U.S. District Court ruled that Colvin was targeted due to her profession and ordered the Syrian government to pay $300 million in damages, though efforts to enforce the judgement against the government have been unsuccessful. The US military recently took custody of two ISIS fighters allegedly involved in the executions of American journalists James Foley and Steven Sotloff, and the fighters may eventually be put on trial in the United States. However, such ad hoc efforts are insufficient, and all journalists and their families who have experienced such crimes deserve to see the perpetrators held accountable.

Journalists in Syria continue to face serious dangers, both from ongoing fighting and targeted repression and detention by the government and non-state actors. The work of Syrian and foreign journalists over the past eight years has been vital in allowing the world to understand the conflict and providing important documentation of human rights violations to organizations like SJAC. Journalists should never be targeted for doing their jobs, and all those who have detained, tortured, and killed journalists reporting on the Syrian conflict must be held accountable for their crimes.