Russian Forces Are Responsible for 43 Attacks on Medical Facilities 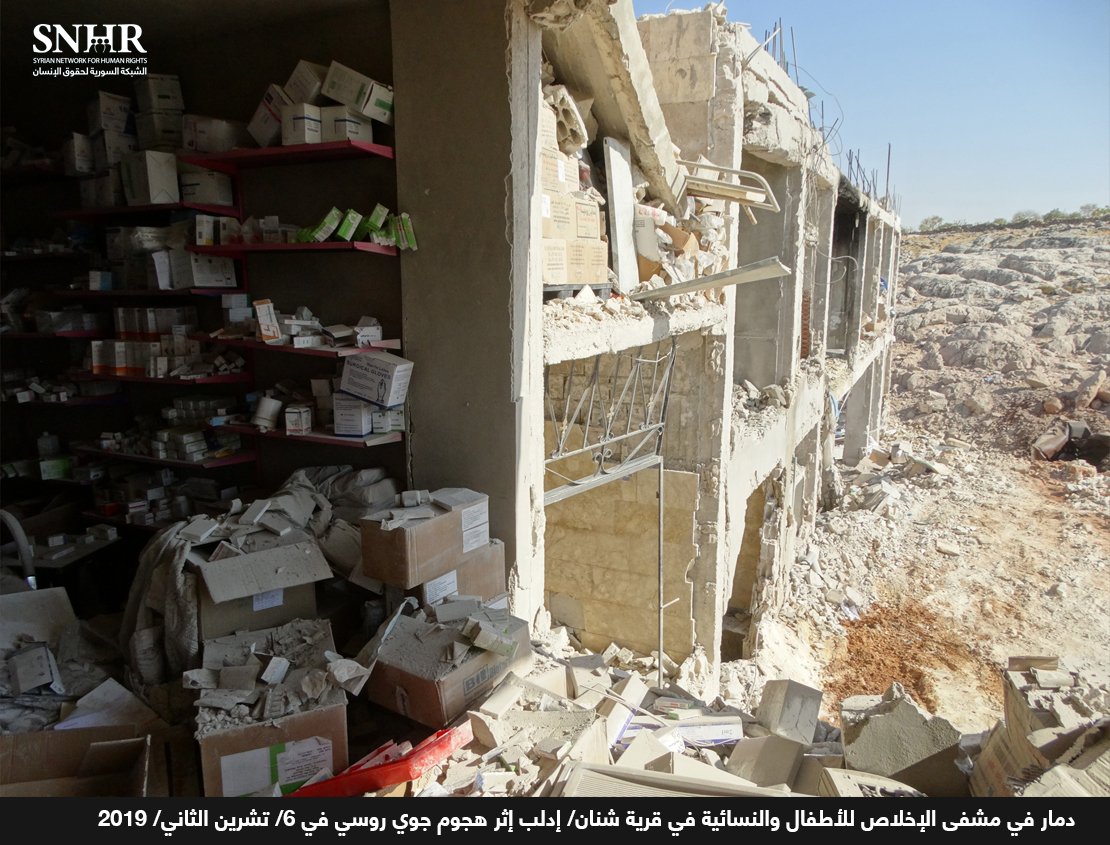 As the nine-page report notes, the Syrian internal armed conflict has seen frequent targeting of medical facilities, as well as other vital civilian facilities such as schools, Civil Defense headquarters, places of worship, etc., by Syrian regime and Russian forces in a manner unseen since the Second World War, with this repeated heinous bombing of medical facilities, and vital civilian facilities encouraged, as the report further notes, by the Syrian regime’s total impunity due to Russia’s veto in the UN Security Council, with regime forces sensing that they have carte blanche to perpetrate any and all crimes, and can bomb what they want and behave however they wish. Regime personnel even add insult to injury by repeating clearly false accusations that these medical facilities and schools are no longer performing their function and are in the hands of terrorists. After the Russian military intervention in Syria began in September 2015, Russia’s forces immediately adopted the same approach as their Syrian Regime peers, including bombing medical facilities and other vital civilian facilities.

As the report details, at least 43 attacks on medical facilities were carried out by Russian forces Syria since the Sochi Agreement entered into force in September 2018 until April 17, 2020, while the total record of attacks carried out by Russian forces on medical facilities in all Syrian governorates since Russia’s military intervention in Syria began on September 30, 2015, had reached 207 as of April 17, 2020.

While the report acknowledges the establishment of the Deconfliction Mechanism to Avoid Targeting Medical Facilities by the UN Office for the Coordination of Humanitarian Affairs (OCHA), it adds that despite this, there is a fundamental imbalance in the work of the humanitarian deconfliction mechanism, particularly in light of the Syrian and Russian regimes’ continuing bombing of medical facilities even though these are listed within the mechanism. In this context, the report also notes that it identified seven medical facilities that had been targeted on 12 separate occasions by Syrian Regime forces or Russian regime forces, despite these facilities being listed within the deconfliction mechanism.

The report further notes that the UN Secretary-General has stated that he would establish an “Internal Board of Inquiry” to investigate attacks targeting medical and vital facilities that occurred in northwest Syria since the implementation of the Sochi Agreement on September 17, 2018, with the Board issuing its report on April 6, 2020.

The report outlines key points concerning the Internal United Nations Board of Inquiry’s report, which was supposed to investigate seven incidents; ultimately, however, it was able to investigate only five of these. The Board accused the Syrian regime of responsibility for four of the five attacks it investigated, while for the fifth incident, the Board blamed the extremist Hay’at Tahrir al Sham group, or one of the Armed Opposition factions.

The report commends some of the positive points included in the Board’s report, such as its clearly demonstrating that the Syrian regime obstructed investigations by preventing the Board of Inquiry from entering the country, in addition to its confirmation that the health care services were being provided in the medical facilities that were bombed, which refutes the Syrian regime’s false statement that these health-care facilities had been overrun by terrorist groups, and that they no longer served their original purpose.

The report further notes some of the negative points of the Board’s report, such as its failure to assign direct responsibility to Russian forces for the bombing of some medical facilities, referring only to the Syrian regime and “its allies” without naming these allies, in addition to voicing disappointment at the Board’s recommendations contained there which were generally inadequate, particularly with regard to the request from the deconfliction mechanism to share the data of medical facilities with the Syrian regime, with this request lending unwarranted legitimacy to the Syrian regime which is the main party accused, as SNHR’s report notes, in approximately 540 operations targeting medical facilities since March 2011 to date.

The report further calls on all boards of inquiry to be strengthened by the option of imposing punitive mechanisms in the event that the state’s ruling authorities refuse to meet their requirements, such as preventing them from entering the country and questioning and rejecting their work as the Syrian regime has done; among the punitive mechanisms suggested in this case is that the United Nations should impose sanctions on the Syrian regime, including economic, political, and possibly military sanctions.

The report stresses that the primary task of the boards of inquiry is to reveal to the oppressed people which party or parties are responsible for killing their children and families and bombing their medical and other vital facilities. This being the case, the report notes that the failure to name the party that committed the violation or crime is considered a profound and fundamental failure in the work of the boards of inquiry, rather than a secondary failure.

The report recommends that further work is urgently required to find an effective mechanism for protecting medical and vital civilian facilities from brutal bombing operations aimed at destroying them and denying them their ability to function in carrying out humanitarian work as quickly as possible. The Syrian and Russian regimes’ targeting of medical facilities in northwest Syria, and in areas that were outside the control of the Syrian regime previously, such as the Eastern Ghouta, Darayya, Daraa, etc., has had an impact over the capabilities of the Syrian state’s health care system, making the country far more vulnerable to the spread of the Covid-19 pandemic among the Syrian people.

Finally, the report calls on the United Nations Secretariat to make greater efforts to prevent UNSC members’ use of their veto to protect any regime, such as Syria’s, which commits crimes against humanity and war crimes.