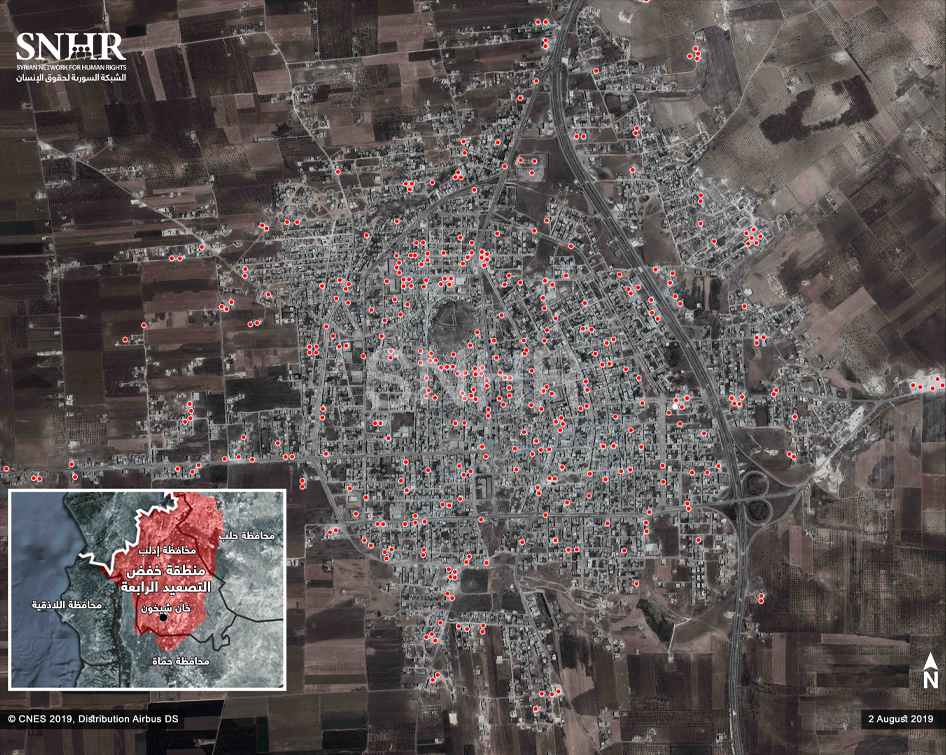 Syrian Network for Human Rights (SNHR) reveals in its latest report that it has obtained satellite images proving the extent of the massive destruction inflicted on Khan Sheikhoun city in the southern suburbs of Idlib, noting that the goal of the Russian-Syrian alliance is to implement the Grozny and Eastern Ghouta model and to destroy as many buildings as possible to punish Syrian society.

Based on these images, the report notes that the magnitude and extent of the destruction of Khan Sheikhoun city in the southern suburbs of Idlib are very similar to what was inflicted on the Eastern Ghouta region of Damascus between February and April 2018, and before that on the eastern neighborhoods of Aleppo at the end of 2016, noting that the extensive destruction inflicted through intense aerial carpet-bombing is not a chaotic process, but a deliberate strategy aimed at destroying as many buildings and facilities as possible to punish the inhabitants of those areas and force them to pay the greatest possible price for demanding freedom, with the regime able to do this due to being protected by continuous total impunity for several years now.

The 17-page report notes that aerial bombardment is responsible for 70 percent of the total destruction in Syria, with the air forces responsible owned and controlled solely by the Syrian regime and Russia, as well as by the International Coalition forces, although the destruction caused by the aerial bombardment by International Coalition forces is not even close to being comparable to the devastation inflicted by the aerial bombardment by Syrian Regime and Russian air forces.
As the report states, nearly 3.1 million homes have been partially or completely damaged to date, meaning millions of Syrians have lost their homes. For many Syrians, this means not just losing a house, but losing their inheritance and a centuries-old part of their family’s history, with a large proportion of these homes passed down through generations.

According to the report, since the beginning of the recent military campaign by Syrian-Russian alliance forces on April 26, 2019, these forces have deliberately bombed and destroyed as many houses as possible, especially targeting vital facilities located in the fourth de-escalation zone (consisting of Idlib governorate and parts of the governorates of Hama, Aleppo and Latakia), particularly in the southern part of the zone which is adjacent to areas under the control of Syrian Regime forces.

This report proves that Russian-Syrian alliance forces have destroyed tens of thousands of residential buildings in recent months in the fourth de-escalation zone in northwestern Syria, through indiscriminate, heavy, extensive, and constant bombardment, particularly through using barrel bombs. The report provides satellite images of Khan Sheikhoun city, which serves as a template showing the similar destruction inflicted on other towns and cities such as al Latamena, Kafr Zita, Kafr Nbouda, and others.

The report outlines the record of Russian-Syrian alliance forces’ use of the most notable types of weapons in the Idlib area since the beginning of the recent military campaign on April 26, 2019, up until September 15, 2019, with SNHR documenting at least 24 cluster munitions attacks, 12 of which were carried out by the Syrian regime, and three carried out by Russian forces, in addition to at least 21 incendiary weapons attacks, all by the Syrian regime.

As the report further reveals, Syrian Regime forces used nail missiles in at least seven attacks, while the Syrian regime’s helicopters and fixed-wing warplanes dropped at least 3,420 barrel bombs, in addition to using chemical weapons in one attack on al Kbaina village in the suburbs of Latakia.

On the extent of the targeting of civilian vital facilities, the report documents 450 attacks by Russian-Syrian alliance forces since April 26 up until September 15, 2019, including 109 attacks on places of worship, 125 on schools, 56 on medical facilities, 21 on markets, and 43 on Civil Defense centers. By far the most commonly targeted locations, however, have been houses and other residential buildings, with the report basing its findings on satellite images, photos and videos which SNHR was able to obtain showing that entire villages and towns have been completely razed, including Jebbin village in the suburbs of Hama governorate. Through an approximate inductive process that extrapolated the destruction witnessed in these images to the other neighborhoods for which it has so far been unable to obtain photos and videos, the report estimates that tens of thousands of residential buildings have been either damaged, or almost or completely destroyed.

The report details the historical context of events in Khan Sheikhoun city, which was selected as a case study example, and analyzes the extent of the destruction inflicted on the city since it broke free of Syrian regime control in May 2014.
Based on satellite images of Khan Sheikhoun city taken on August 2, 2019, the report identifies about 220 points where buildings were severely destroyed, noting that approximately 35 percent of the area of the city has been completely destroyed, and 40 percent of it partially destroyed. This means that about 75 percent of the city’s buildings are either partially or completely destroyed.

The report reveals that the bombardment by Russian-Syrian alliance forces targeting the fourth de-escalation zone since April 26 has resulted in the deaths of 1,012 civilians, including 272 children, and 171 women (adult female), as well as causing the displacement of approximately 630.000 civilians according to the United Nations Office for the Coordination of Humanitarian Affairs, and leading to the accumulation of approximately 500.000 asylum seekers on the Turkish border.

The report emphasizes that at the humanitarian response level, the recent displacements are the worst to date, given the very large number of internally displaced persons, and the inability of local and international humanitarian organizations to respond to all of them, with the international response still failing to meet even 10 percent of these basic needs, and being completely inconsistent with the size of the human influx and the magnitude of the disaster that has befallen them.

The report stresses that the Syrian-Iranian-Russian alliance forces have unquestionably violated UN Security Council Resolutions No. 2139 and 2254 to stop indiscriminate attacks, as well as violating Articles 7 and 8 of the Rome Statute by committing intentional homicide, all of which constitute crimes against humanity. The report also notes that the Russian-Syrian alliance forces have used indiscriminate and highly destructive indiscriminate weapons and prohibited weapons such as cluster munitions and chemical weapons.

The report adds that bombardments have inadvertently caused losses of civilian lives, injuries, and severe damage to civilian objects, and there are strong indications that lead SNHR to believe the damage is disproportionately extreme compared to any military objectives for the attacks, noting that such indiscriminate bombardment has caused a succession of violations, including the crime of enforced displacement, which constitutes a war crime under the Rome Statute of the International Criminal Court.

The report calls on the UN Security Council to issue a binding resolution that prevents and punishes the crime of enforced displacement, compels the cessation of enforced displacement, and explicitly provides for the right of forcibly displaced people to return safely to their homes, and receive reparation for what they have suffered, and to compel the Syrian regime to stop its settlements and replacements it carries out in cities and neighborhoods whose residents have been displaced; that is to say, forced displacement threatens the region and Syrian territory, destabilizing security and stability, and establishing peace and security for Syria is at the core of the Security Council’s tasks, responsibilities and capabilities.

The report recommends that the Security Council should refer the Syrian case to the International Criminal Court and all those responsible, including the Russian regime whose involvement in these war crimes has been proven, should be held accountable, and that the Security Council should establish peace and security, implement the principle of the Responsibility to Protect civilians, to save Syrians’ lives, heritage and cultural artefacts from destruction, pillage and vandalism, and should extend sanctions to include the Syrian, Russian and Iranian regimes who are directly implicated in war crimes and crimes against humanity against the Syrian people.

The report stresses that the Russian and Iranian regimes should face heavy fines for the destruction of vital buildings and facilities in Syria. These amounts should be reflected in the compensation of the victims and the restoration of the houses and shops which these forces contributed to destroying.

The report calls for action to be taken at the national and regional levels to form alliances to support the Syrian people that can protect them from the daily killings, lift the siege and increase support for relief efforts. Additionally, the principle of universal jurisdiction should be applied in local courts regarding these crimes in order to conduct fair trials for all those who were involved, the ‘Responsibility to Protect’ principle should be implemented, and steps should be taken under Chapter VII which was established by the United Nations General Assembly. At present, however, as the report notes, the Security Council is still hindering the protection of civilians in Syria.
The report urges the United Nations to work to fulfil justice and achieve accountability in Syria through the United Nations General Assembly and the Human Rights Council and to implement the principle of the universal jurisdiction.

The report further calls on the OHCHR to assist in the building of a central housing and real estate database in Syria, with the aim of achieving reparations, implementing voluntary repatriation programs and ensuring restitution of housing, land and real estate in accordance with the UN Principles on Housing and Property Restitution for Refugees and Displaced Persons – Pinheiro Principles, to prepare a special report on destroying buildings, shops and vital facilities in northwestern Syria, and to report to the Security Council on the seriousness and sensitivity of the issue of property destruction.

The report also calls on the Independent International Commission of Inquiry (COI) to include a broad paragraph on violations of property destruction by Russian and Syrian forces in the next report in February 2020 and to do whatever is necessary to investigate the extent to which Russia and the Syrian regime intentionally destroy as many homes and other properties as possible.

The report urges the UN Envoy to Syria to highlight in the forthcoming UN Security Council briefing the destruction of tens of thousands of residential buildings in northwestern Syria by Russian and Syrian forces and the forced displacement of their people, to clearly condemn the perpetrators of crimes, massacres and the main perpetrators of violations of Security Council resolutions, and to call for a speedy implementation of democratic political change that restores victims’ rights and embodies the principles of transitional justice.

The report asserts that the Russian regime must not repeat its bombardments and killings of civilians and targeting of their vital facilities, houses and shops, adding that it must stop supporting the Syrian regime in the Security Council and stop using its veto to block the passage of any UN resolution punishing the Syrian regime, and must reconstruct and restore the residential buildings and shops destroyed by Russian military forces, and compensate victims throughout the duration of their displacement.