One of the principle difficulties faced by prosecutors in bringing these cases is obtaining sufficient, relevant, and credible evidence 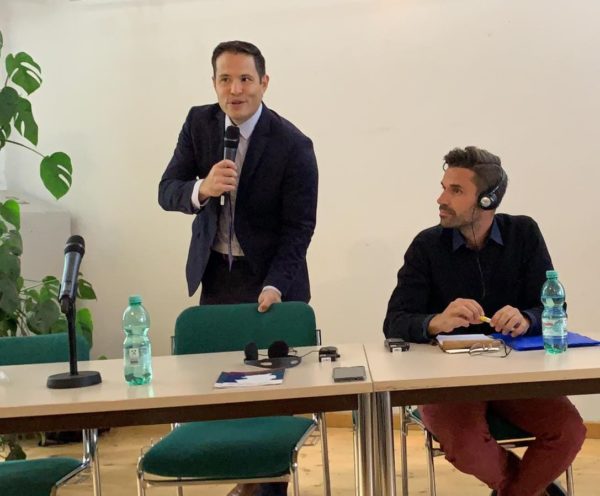 On September 4, 2019, SJAC launched its Universal Jurisdiction guides at an event at the House of Democracy and Human Rights in Berlin organized by SJAC in partnership with the European Center for Constitutional and Human Rights (ECCHR), and the Caesar Files Group. Legal practitioners, activists, and ordinary Syrians joined the discussion on the rights of Syrian victims in Europe, the opportunities and limitations of Universal Jurisdiction, and how prosecutors in European states can better engage with local Syrian communities.

The principal of Universal Jurisdiction is based on the notion that “certain crimes are so grave, they affect the international community as a whole.” Based on this principle, European states have passed legislation allowing their courts to prosecute serious crimes committed during the Syrian conflict, in some cases where there are no direct links between the state and the crime. As SJAC assessed in its 2015 report, A Step Towards Justice, such criminal prosecutions in foreign national courts represents the most feasible option for pursuing accountability in Syria at present.

In recent months, a number of indictments and arrests against current and former Syrian intelligence officers in European courts have sparked interest and excitement among Syrians regarding Universal Jurisdiction. Notably in June 2018, Germany’s Chief Federal Prosecutor issued an arrest warrant for Jamil Hassan, the former head of the Syrian Air Force Intelligence which is responsible for some of the worst atrocities committed throughout the conflict. Subsequently in February 2019, German and French authorities arrested three former Syrian intelligence officials charged with crimes against humanity.

One of the principle difficulties faced by prosecutors in bringing these cases is obtaining sufficient, relevant, and credible evidence. To address this issue, engagement with Syrian communities and the collection of witness testimonies are critical. Yet in its discussion with ordinary Syrians, SJAC has found that there is a general lack of understanding of Universal Jurisdiction, how it works, and what it means for Syrians who have experienced serious crimes in the conflict.

As a tool to help Syrians understand the legal framework for universal jurisdiction in Europe, and to help connect victims with NGOs and prosecutors, SJAC has created a series of guides on universal judications laws in six countries: Belgium, France, Germany, Netherlands, Sweden and the United Kingdom. Each country guide is published both in Arabic and English, and is written for victims and witnesses, including those without any legal background. They outline the opportunities and limits of submitting a complaint, the steps to filing a complaint, the investigation and trial process, and the rights of victims and witnesses.

In the first part of the panel discussion, Aoiss Aldobouch, SJAC’s Legal and Human Rights Adviser, presented SJAC’s Universal Jurisdiction guides, explaining why they were needed and how they can serve ongoing and future cases across Europe. Meanwhile, Patrick Kroker, who leads ECCHR’s work on Syria, discussed what prosecutors are looking for from potential victims and witnesses.

In the second session, panelists spoke to the particular needs of Syrian victims and witnesses. Asylum lawyer Jenny Fleischer discussed immigration considerations for Syrians making statements or filing criminal complaints. While filing a criminal complaint does not adversely impact one’s asylum claim, she advised individuals to seek out legal representation and consult SJAC’s new briefs and other such free resources available to refugees. Noting that trauma can often arise when recounting past experiences, psychotherapist Sibylle Rothkegel offered strategies for victims and witnesses to prepare to offer their testimonies.

SJAC hopes that its guides and the resulting conversations can help to bridge the gap between Syrian refugee communities and European prosecutors. The full collection of guides can be found here.