The Autonomous Administration, and the Asayish, would not tell people seeking information about their missing relatives 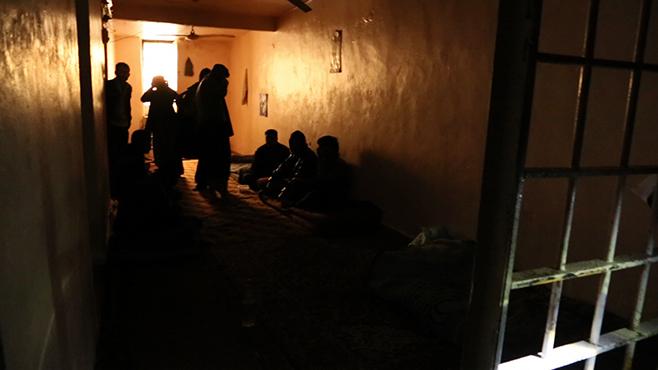 An autonomous de facto government in northeastern Syria is detaining members of a rival political coalition and violating their due process rights, Human Rights Watch said today. The Democratic Union Party-led Autonomous Administration has apparently detained members of the Kurdish National Council arbitrarily, and in some cases appears to have forcibly disappeared them.

Human Rights Watch spoke with two former detainees and the relatives of two others, one of whom is still disappeared, in person in al-Hasakeh governorate and by phone. All said the detainees were denied access to their families and lawyers. Some were never brought before a judge, and others were held for lengthy periods before being brought to court. Those interviewed said they believed that the arrests were based on the individuals’ political affiliation or opinion.

The Democratic Union Party, known as the PYD, took control of parts of northeast Syria in late 2012, and later established the Autonomous Administration, which now exercises de facto control over the region. Since January 2018, the local police, known as Asayish, and military, the People’s Protection Units, have arrested at least 20 members of opposing political parties, according to local human rights and media organizations. Ten of the arrested remain detained or their whereabouts are unknown, while the others have been released.

In three cases Human Rights Watch investigated, the Autonomous Administration, and the Asayish, would not tell people seeking information about their missing relatives where they were or allow any communication with the detainees. The relative of one person forcibly disappeared in March 2017 whose whereabouts are still unknown, said:

We visited the Asayish, and others. We visited the Asayish prisons – and there are many here. They keep denying that they took him. And how is that possible? I told them, did a plane from the sky pick him up? Or did the ground crack up and take him?… I’d argue with them, tell them, okay, you didn’t take him? Well, find him.”

In two other cases, it was only confirmed after their release that they had been in Asayish custody. The Asayish had denied holding them or knowing where they were when family members had been looking for them.

“We didn’t know if he was alive or dead, if he was okay or where he was,” the daughter said. “My father has back pain, and I kept going with his medicine bag, begging them to take it and give it to him, but they would say, ‘We don’t have him’ or, ‘We don’t know who you are talking about.”

The two released detainees said they were not allowed access to lawyers while in detention and they were only brought before a judge after being held for lengthy periods of time. In the other two other cases, the detainees were never taken before a judge or prosecutor, according to relatives.

Under international law and in the absence of emergency provisions, authorities should bring a suspect before a judge within 48 hours of arrest to review the legality and necessity of the continued detention and to ensure that the detainee’s rights are respected. All detainees should be promptly charged or released. Local law provides that authorities should charge a detainee and take them before a court within five days of arrest.

The authorities should ensure that there is a clear legal basis for all detentions, that all detainees have access to legal counsel, including during interrogation, and that families are immediately notified if a loved one is detained and given details of their whereabouts. Detainees should promptly be taken before a judge to rule on the legality of their detention, and all authorities should immediately comply with any judicial order for release.

International human rights law, which the Autonomous Administration has incorporated into its constitution, provides that detainees have a right of access to a lawyer and to inform people of their choosing about their detention. International law also obliges authorities to maintain careful records of detentions and to share that information with appropriate people so that the detainee is protected by law and there is effective accountability for all detentions.

When authorities are informed that a person may have been forcibly disappeared or is otherwise missing and state forces are believed to be responsible, the authorities are obliged to conduct an effective investigation capable of determining the person’s whereabouts and situation. An enforced disappearance under international law occurs when a person is deprived of their liberty by state officials or their agents, followed by a refusal to acknowledge the arrest or to reveal the person’s fate or whereabouts.

Enforced disappearances violate a range of fundamental human rights protected under international law, including prohibitions against arbitrary arrest and detention; torture and other cruel, inhuman, or degrading treatment; and extrajudicial execution. Enforced disappearances also contravene the right to due process and fair trials. The international norms regarding prison conditions are set out in the United Nations Standard Minimum Rules for the Treatment of Prisoners (the “Mandela Rules”). Rule 58 protects a prisoner’s right to receive visits “at regular intervals” from family and friends.

“So long as the Autonomous Administration is holding itself out as the de facto government in the northeast and conducts arrests and court proceedings, it needs to adhere to basic international human rights obligations,” Fakih said. “Insecurity is never a valid excuse for infringing on detainee rights.”