Wave of airstrikes force 700,000 civilians to flee towards Turkish border 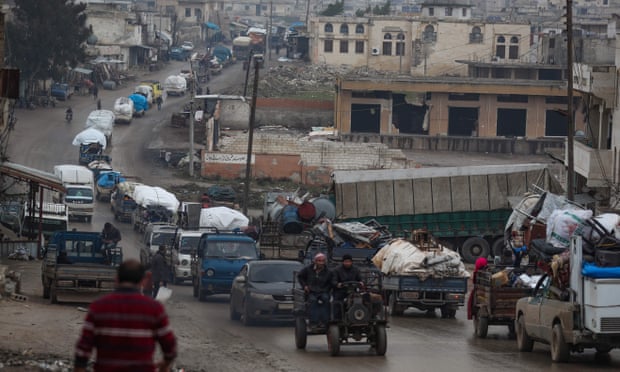 Syria’s last opposition-held province has been battered with 200 airstrikes in the past three days in an assault that has pushed 700,000 civilians to flee towards the Turkish border and sparked fears of an impending international crisis.

The strikes on north-west Idlib were carried out mainly against civilians, the US special envoy for Syria, James Jeffrey, said on Thursday.

Rescue workers and a war monitor said a hospital and bakery in the town of Ariha were targeted by Bashar al-Assad’s Russian allies on Thursday, killing 11 people. Syrian and Russian strikes and shelling in the last few days have also hit roads jammed with convoys of civilians travelling northwards.

The violence has led neighbouring Turkey, which backs some rebel groups and does not want to absorb more refugees, to threaten military force against the regime and its allies in the area if the offensive continues. 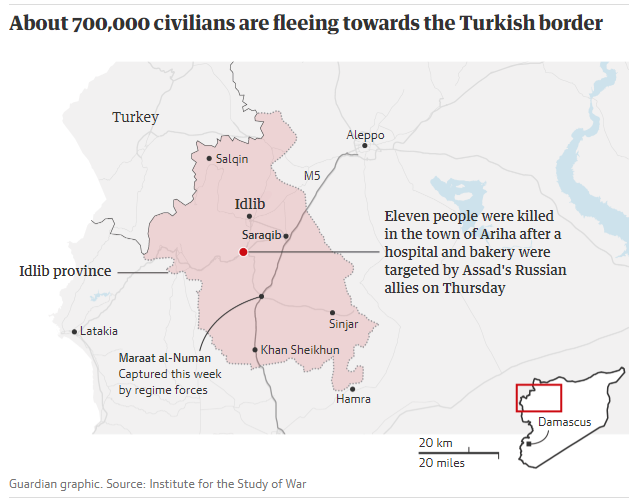 “We will not allow the [Syrian] regime’s cruelty towards its own people, with attacks and causing bloodshed. We will do what is necessary when someone is threatening our soil. We will have no choice … if the situation in Idlib is not returned to normal quickly,” the Turkish president, Recep Tayyip Erdoğan, said in a speech on Friday.

In response to Erdoğan’s comments, the Kremlin said Russia was fully compliant with its obligations in Idlib.

Turkey has intervened militarily in Syria three times to date in cross-border operations against Islamic State and US-backed Kurdish-led forces it regards as a terrorist threat, but never directly against Assad’s troops and allied militias.

Idlib and the surrounding countryside are nominally protected by a de-escalation agreement brokered by Moscow and Ankara in 2018. Fighting in the area has steadily worsened, however, since Hayat Tahrir al-Sham (HTS), al-Qaida’s former Syrian affiliate, emerged as the dominant group in the area last year.

Damascus and Moscow say the HTS takeover legitimises the campaign against Idlib as they are targeting terrorists not covered by the ceasefire deal who have stepped up attacks on government-held Aleppo.

Aid agencies and rescue workers, however, say airstrikes have demolished dozens of hospitals, schools and other civilian infrastructure, and warn Idlib’s 3 million-strong population is at risk of the nine-year war’s biggest humanitarian crisis yet.

The latest ceasefire attempt for Idlib on 12 January was ignored by the Syrian government, which instead accelerated its efforts, capturing several villages and the key town of Maarat al-Numan on the strategic M5 highway earlier this week with the help of Russian airpower.

The next target is Saraqeb, which 33-year-old Ahmad al-Khaled and his family fled on Wednesday for the relative safety of Idlib city.

“The regime troops are only a few metres away now,” he said. “Saraqeb is empty, people are trying to sell their furniture to afford transportation to other areas and rent if they can find houses. Some people are exploiting the displaced by asking for $200 (£152) a month rent, which is a lot since the Syrian pound keeps going down.

“Even though it’s very dangerous, the bombing is intense and surveillance drones and jets are hovering in the skies all the time, I have to go back to Saraqeb to get our belongings because we can’t afford to buy new things.”

Almost 390,000 people, around 80% of whom are women and children, have fled their homes since 1 December, the UN said this week, and another 400,000 people have been displaced since April.

Thousands of families are sheltering in schools, mosques and tents near the Turkish border without adequate food or medicine in the winter weather.

A mass demonstration in the area calling on the Turkish authorities to open the border to refugees is planned for Sunday.