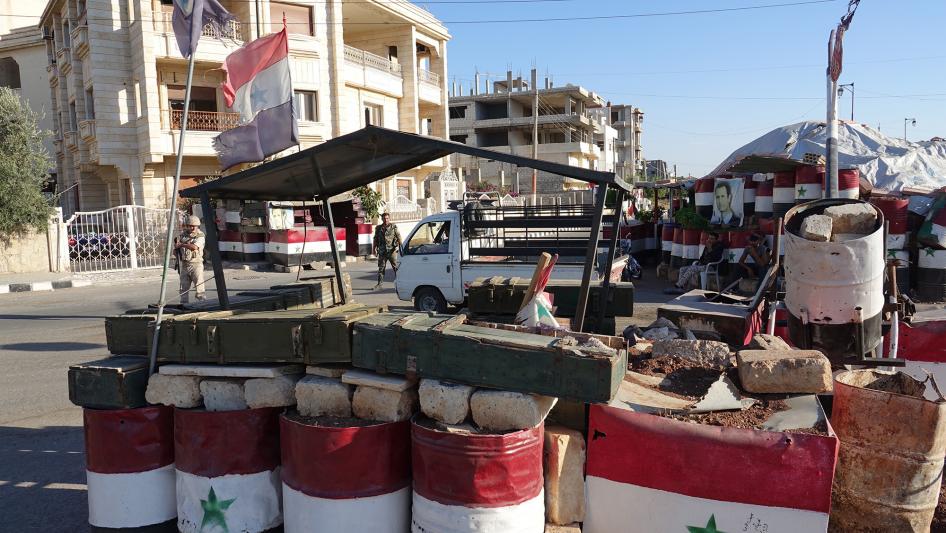 (Beirut) – The Syrian government is punishing entire families of people placed arbitrarily on a list of alleged terrorists by freezing their assets, Human Rights Watch said today. The government should end collective punishment of families, provide evidence of unlawful activity of the people targeted, and allow them to appeal their listing or unfreeze their assets.

Human Rights Watch has previously documented that Syrian authorities have used overbroad language in the counterterrorism law to criminalize providing humanitarian aid, recording human rights abuses, and engaging in peaceful dissent. Decree 63 empowers the Finance Ministry to provide permission to freeze the assets of people pending investigation of their crimes as suspected terrorists under Syria’s Counterterrorism Law of 2012, even where they have not been charged with any crime. Beyond the substantive and due process flaws within the law and the law governing the Counterterrorism Court (Law No. 22), new research by Human Rights Watch shows that the way the ministry is carrying out the provisions, including targeting families of people listed, constitutes collective punishment and violates their property rights.

The decree also contradicts the government’s stated intent of encouraging Syrians who fled the eight-year civil war to return to Syria. By widening the scope of the decree to arbitrarily punish families of people who may be charged or prosecuted, the government is signaling to the families that they too are at risk.

Human Rights Watch spoke to four people who have been affected, the relative of another, and a former land registration employee. These cases involved former residents of Eastern Ghouta, Aleppo, and the Damascus countryside, areas that government forces had retaken from anti-government groups between 2014 and 2019. Human Rights Watch also examined documents circulating online with lists of names of hundreds of people whose assets were frozen under the counterterrorism law.

The lists include date of birth, age, and mother’s name of individuals from areas previously held by anti-government forces whose assets had been seized or frozen. The lists also name immediate families, including wives and children, and in several cases, parents. The land registration employee confirmed the authenticity of the documents, but Human Rights Watch was unable to independently verify the lists. The lists were dated from 2016 to 2018.

The people interviewed indicated they had not been notified they were included. They said they only became aware their assets had been frozen or seized when they attempted to access, register, or conduct a transaction involving their property, or when they saw their names on these lists circulated on media outlets affiliated with opposition forces.

“I was not informed of this decision,” one person said. “I found my name on one of the lists circulated by Zaman al-Wsl [one of the media outlets]. My name, and my father’s. We lost a house, a car, and a factory.”

The lists also had far-reaching impact on relatives not named. One person said he was not surprised to see his name on a list, but that the asset freeze had negative implications for family members still in government-held areas who relied on a family-owned pharmacy for income. He too found out through Zaman al-Wsl, as did his brother, who remained in the government-controlled area and was not able to access or transfer the property to himself.

“When [my brother] went to the pharmacy, he found that it had been waxed shut, and the keys were with the [local] National Security branch,” the person interviewed said. “When he went and asked for the key, they told him I was a traitor and a terrorist. He replied that he is not in touch with me, and that this is an important source of income for the family. They hit him and sent him away.”

All but one person interviewed said they were aid workers or had participated in protests but had never taken up arms. The relative of one woman whose assets had been frozen said that the woman was not politically active. Human Rights Watch was not able to independently verify these claims.

With the exception of the one man whose brother reached out to the security services to attempt to retrieve property, the other people said they had not approached the authorities. They were either afraid of putting family members at risk or did not know whom to approach to resolve the confiscation issues.

By penalizing people solely on the basis of their family relationship with an accused person, and not on the basis of their individual criminal responsibility, the Finance Ministry’s implementation of Decree 63 constitutes collective punishment, which is prohibited under international humanitarian and human rights law in all circumstances. The prohibition on collective punishments applies to criminal sanctions for actions for which the people concerned do not bear individual criminal responsibility, but also to “all sanctions and harassment of any sort, administrative, by police action or otherwise.”

The decree also violates due process guarantees in that the law provides no appeal and no official notification for those on the list. By allowing the government to seize individuals’ property without due process or notice, the decree also violates property rights which are protected under Article 15 of the Syrian constitution and international law.

Syria’s counterterrorism law defines terrorism as “every act that aims at creating a state of panic among the people, destabilizing public security and damaging the basic infrastructure of the country by using weapons, ammunition, explosives, flammable materials, toxic products, epidemiological or bacteriological factors or any method fulfilling the same purposes.” Human Rights Watch has documented that the phrase “any method” allows the government to label almost any act as a terrorist offense, and jail people providing humanitarian aid or participating in non-violent protests.

The Syrian government should provide specific reasons for including people on its list of alleged terrorists or remove them from the list and unfreeze their assets. It should also allow affected people to appeal the listing. The government should amend the counterterrorism law, and the laws and decrees subsequent to it, to remove any overbroad definitions of terrorism and incorporate due process and fair trial guarantees, including an open trial with a right to legal counsel and a full right to appeal.

“As with other legal instruments, Syria is using Decree 63 to authorize abusive and arbitrary practices that rob people of their very livelihoods,” Fakih said. “So long as its laws and practices violate people’s rights, Syria will not be safe or stable.”