Syrian refugees forced to destroy their own homes in Lebanon 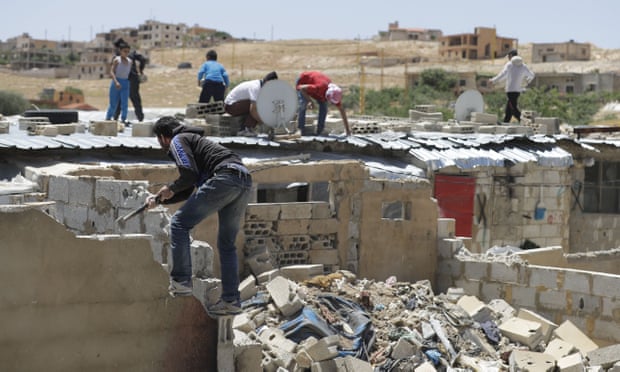 Source: By Bethan McKernan | The Guardian

Syrian refugees in Lebanon are being forced to tear down their own homes in the face of an aggressive new campaign by the Lebanese authorities to pressure refugees into returning home.

In the border town of Arsal, informal settlements that house 55,000 refugees were the scene of frantic activity under the hot summer sun on Friday as young men took apart the breeze-block homes with pickaxes, hammers and drills, covering the ground in rubble and dust.

“We don’t have anywhere else to live and there is no one to help us,” 84-year-old Rasmeera Raad said between sobs as she sat with her two disabled adult daughters in a makeshift mosque near the site of their old house.

Local officials have decided to implement a military decree demanding the demolition of Syrian concrete structures more than 1 metre high before a 1 July deadline. Fearing that the army will come with bulldozers and raze the camps to the ground, families have decided to carry out the work themselves in order to save the few possessions they own.

The British charity Edinburgh Direct Aid (EDA) as well as the UN refugee agency (UNHCR) are on the ground helping to construct and move families into new wood and tarpaulin shelters, but time is running out before the Monday deadline and the evictions have stretched aid groups’ financial resources.

“I cried when we got the order to demolish our home,” said a 47-year-old father of five, Mohamed al-Qasem, who lost his leg after a shelling attack in Syria.

“The breeze-block walls protect us from the worst of the winter storms. I couldn’t do the work with one leg but I had no choice, even if it took me six months on crutches. Now we can relax – our home is finished and we have obeyed the army rules. But what about the next time they order us to do something? We never know.”

Lebanon has become home to about 1.5 million Syrians since the war next door broke out in 2011. Fearing the newcomers would permanently settle – like the Palestinians before them – the Lebanese government has not allowed the creation of formal refugee camps and outlawed the construction of “permanent residences” using concrete.

The ordered demolition in Arsal has left 5,000 families and as many as 15,000 children homeless again, according to Save the Children, forced to relive the traumatic experience of sleeping outside or in overcrowded tents.

Anti-refugee sentiment has grown and faded in Lebanon over the years, but is on the rise again as a result of a deteriorating economy and the growing profile of the foreign minister, Gebran Bassil, who has spearheaded a new campaign to send Syrians home.

Bassil, the leader of Lebanon’s largest Christian party, the Free Patriotic Movement, portrays himself as the protector of the country’s dwindling Christian population by referring to what he says is a Lebanese “genetic distinction” and nationalist slogans such as “Lebanon above all”. It is believed he has ambitions to take over as president from his ageing father-in-law, Michel Aoun.

His government coalition allies have begun enforcing laws that were previously rarely implemented, shutting down shops owned by or employing Syrians without permits and ordering the demolition of permanent refugee structures.

The hostile rhetoric has spiralled into violent incidents, such as an arson attack on a Syrian settlement near the town of Deir al-Qamar this month which displaced 400 people.

After eight years of exile in miserable conditions, many Syrians express a desire to return home. Aid agencies and rights groups say, however, that without a political resolution to the war or guarantees for returners’ safety the country is still too dangerous for any large-scale return programme.

“While many parts of Syria are not witnessing active conflict any more, vast swaths of the country are still facing unprecedented destruction. This means that many refugees do not have homes to return to or services when they get there,” said Joelle Bassoul, regional media manager for Save the Children.

“In addition, men fear conscription into the Syrian armed forces, and many families are concerned about arrest, detention, and imprisonment if they return.”

In Arsal on Friday, a visit from the army to inspect the demolition work sent tensions in the camp skyrocketing.

“We battle on and we will meet the deadline but the future for Syrian refugees in Lebanon is bleak,” Maggie Tookey, overseas project director for EDA, said from the site.

“I saw the hopelessness in the eyes of Fatima Zahouri, a young teacher. She asked me: ‘Is this the way our lives will always be?’”