The scrapped truce was brokered in the Kazakh capital of Nur-Sultan Aug. 1, in the presence of the Syrian opposition, the Syrian government and the guarantor states of Russia, Iran and Turkey 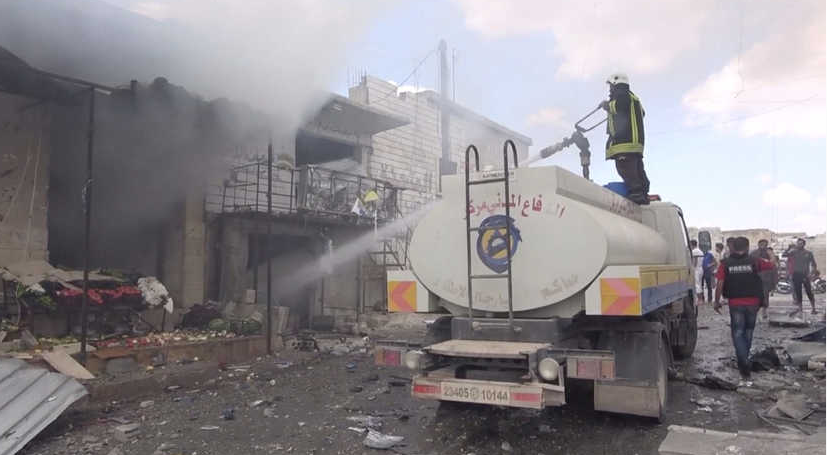 ALEPPO, Syria — Syrian government forces said Aug. 5 that the truce brokered at the Astana 13 talks has been scrapped, accusing the armed opposition of breaking the agreement and not sticking to the Sochi deal whereby rebel groups were to pull their heavy weapons from the de-escalation zone.

The Syrian regime resumed military operations, air shelling rebel-held sites in the buffer zone, cities and towns in the countryside of Idlib, Hama and Latakia. The opposition factions retaliated with a barrage of artillery shells on regime sites and thwarted the regime forces’ advance in the al-Ghab Plain of the Hama countryside. On Aug. 6, four civilians were killed in Syrian airstrikes in the town of Murak in the northern Hama countryside.

The scrapped truce was brokered in the Kazakh capital of Nur-Sultan Aug. 1, in the presence of the Syrian opposition, the Syrian government and the guarantor states of Russia, Iran and Turkey.

Fighting between the Syrian opposition factions and the government forces in the southern Idlib governorate, northern Hama countryside and northern Latakia countryside came to a brief halt on Aug. 2. A cautious calm had reigned over Idlib with intermittent bombing by the regime’s forces, but with no Russian or Syrian warplanes in sight in Idlib’s airspace.

The short-lived agreement between the opposition armed factions and the Syrian regime came after heavy fighting that lasted nearly three months since the beginning of May, during which Russian and Syrian airstrikes targeted opposition-controlled towns and areas in the governorate of Idlib and its surroundings, causing horrific massacres against civilians.

The regime’s scorched-earth tactics led to heavy air and land bombings targeting opposition sites inside and around the two towns. The regime tried to retake them several times, suffering heavy losses in troops and military equipment, which was destroyed by the opposition anti-tank missiles and on the battlefields and in ambushes.

The military commander of the Free Syrian Army’s al-Fatah Brigade, Capt. Amin Malhis, told Al-Monitor that the regime had been insisting on taking back the towns at any cost before the Astana 13 talks in a bid to strengthen its position and pressure the opposition. The regime also wanted to push the rebels away from its main stronghold in the northern countryside of Hama and secure and reopen the road between the towns of Mahardah and Al-Suqaylabiyah that was cut off by the rebels.

“The towns of Tell Meleh and al-Jabin are seen of great strategic importance because of their proximity to the Russian bases in the towns Tell Salba, Braideej and Jab Ramla airport and other military sites and camps the opposition has been targeting with heavy weapons at close proximity,” Malhis told Al-Monitor.

After retaking control of the two strategic towns, the regime forces continued to attack the opposition in the northern countryside of Hama, trying to reach to the opposition-controlled town of Zakat, one day before the Astana talks on July 31.

The regime attacked to protect its strongholds and the Russian camps in the towns of Mahardah and Al-Suqaylabiyah and to keep the opposition at bay, especially Jaish al-Izza (Army of Glory). On Aug. 1, the regime’s advance was halted when a car bomb hit its forces in Hasraya near Zakat.

Commander of Jaish al-Izza Col. Mostafa Bakkour told Al-Monitor, “The Syrian forces and their Russian allies did not advance toward Tell Meleh and al-Jabin until about six weeks after we took control of them. The regime was trying all this time to retake control, firing a barrage of rockets and artillery shells on our sites inside the towns.”

Bakkour added, “The heavy Russian and Syrian airstrikes and barrel bombs razed the two towns to the ground. Had it not been for these scorched-earth tactics, the regime would have not been able to take them back.”

The spokesman for the FSA National Liberation Front, Capt. Naji Abu Hudeifa, told Al-Monitor, “When we took control of the two strategic towns on June 6, the regime’s military sites in northern Hama countryside came within our range of fire and we were able to cut off the most vital roads connecting their areas of control. The operations to take back the town cost them thousands of airstrikes, barrel bombs, missiles and hundreds of soldiers on the battlefield.”

“We gave the regime a taste of bitter defeat and inflicted heavy losses. The regime’s attack on Idlib that started out as a hopeless battle for us ended up being a win in terms of the heavy losses we caused the regime forces before they manage to retake control of the two towns. The regime forces that were advancing in southern Idlib were forced to fall back to defend their positions and try to retake control,” he concluded.