The United States Is Done Caring About Syria 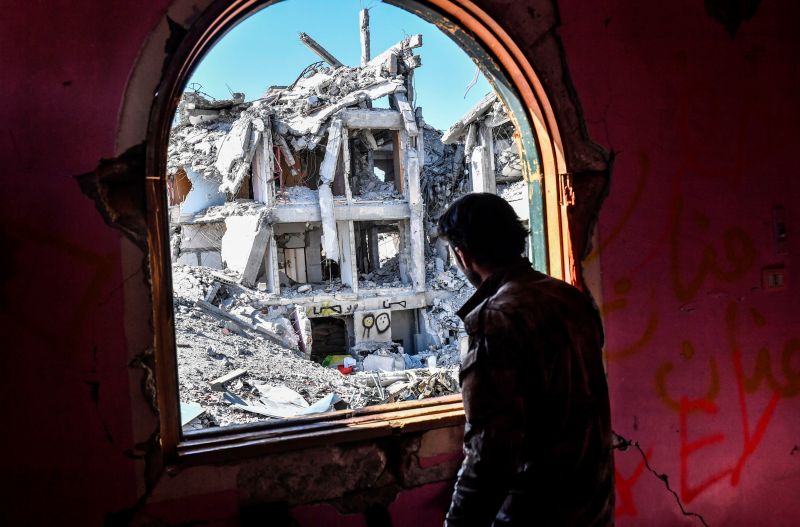 If a congressionally mandated report on a vexing foreign-policy issue is published in Washington in 2019, will anybody pay attention? Probably not, especially these days. So it is with the Syria Study Group (SSG), a bipartisan commission charged by Congress with “examining and making recommendations on the military and diplomatic strategy of the United States with respect to the conflict in Syria.”

Perhaps it is the SSG’s bad timing—its final report dropped on Sept. 24, the same day House Speaker Nancy Pelosi announced an impeachment inquiry into President Donald Trump’s alleged abuse of power. The news avalanche that followed buried everything in its path. Still, had the SSG’s final report been published a week or a month earlier, the chances are it would have been met with the same indifference and obliviousness. In a town of people obsessed with the 24-hour news cycle, only a small number of people in Washington were even aware that the SSG existed. Everyone else would prefer not to care.

It is too bad that few seemed to notice the SSG because its report is a solid piece of work. (Full disclosure: I am friends with or friendly with most of the members of the group and its staff.) It effectively disentangles the different strands of the Syrian conflict and provides a much-needed clear and concise explication of the motives and interests of key battlefield actors. The authors also offer a set of well-thought-out recommendations for the U.S. government. Yet the report does something else equally important and incisive: In an entirely unintentional way, it makes the case that the United States is unlikely ever to substantially contribute to the peace and stability of Syria.

The report hinges on the SSG’s view that within the Syria conflict there are five threats to U.S. national security. First, the self-declared Islamic State remains potent, well resourced, and ideologically committed to achieving its goals despite the pounding it has taken over the last five years. The reports coming out of makeshift prison camps under the control of the Syrian Democratic Forces underline the fact that Abu Bakr al-Baghdadi still has large numbers of followers and the Islamic State’s leadership remains largely intact. Second, Iran’s presence in Syria threatens a wider regional war, given the shadow war between the Israelis and Iranians in the seams of the conflict. So far Iran’s direct response to Israeli incursions have been minimal, but this only raises the opens the possibility that Iranian leaders will soon encourage its proxies in Lebanon and the Gaza Strip to respond on their own. Third, if U.S. foreign policy is destined to be shaped by great-power competition, then Russia is using Syria to build influence at the expense of the United States. From the perspective of leaders in the region, the Russians come across as competent, non-ideological, and credible compared with their U.S. counterparts, who are believed to be mostly incompetent, overly in love with the idea of pushing democracy, and ultimately unreliable.

In addition, the violence that Bashar al-Assad and his supporters have unleashed on Syria has had far-reaching effects, including the political destabilization of Europe. There have long been neo-Nazis in European politics—though for some reason they are routinely referred to as “far right”—but the wave of Syrian refugees in 2015 gave them a political boost in countries including Sweden and Hungary. In Germany, the Alternative for Germany (AfD), a far-right party, has scored significant political victories in the eastern part of the country. In Italy, Matteo Salvini, who has flirted with outright fascism, served as interior minister until recently. He is out of government, but there is every reason to believe that he and his supporters will be back. Salvini, the AfD, Nigel Farage in the United Kingdom, and France’s National Rally have all capitalized on the presence of Syrians in Europe seeking safety from a horrific war.

The weakest argument made by the SSG is that the Assad regime’s violation of international norms “has eroded perceptions of American power and credibility.” Of course, Assad has killed hundreds of thousands of people and used chemical weapons, but the report makes it seem as if U.S. inaction in response to the Syrian regime’s onslaught is solely responsible for the widespread impression of U.S. weakness. That simply is not the case. There are a whole host of other U.S. policies before and since the start of the Syrian civil war that have fed that impression, notably the bungled invasion of Iraq, and the pulling out of the Iran nuclear deal, among others.

After its discussion of the threats to the United States and its interests, the report moves on to the motivations of the conflict’s primary combatants before exploring the issue of U.S. leverage. This is a crucial issue. The report does not have much of a point if it doesn’t account for leverage, because without it U.S. officials won’t have any reason to think they can shape the conflict and help bring it to an end in a way that protects their national interests. The authors make a strong case that the United States has a fair amount of influence over the Assad regime. They point out that Americans and their allies already control a strategically important piece of Syrian territory; U.S. sanctions have made it harder for the Assad family and regime supporters to benefit from the war; and Washington’s diplomatic and financial weight can and has denied the regime reconstruction funds. Although five Arab countries have begun to reestablish or upgrade their relations with the Syrian government, the U.S. position enjoys a significant amount of international support.

The recommendations for U.S. officials are the weakest part of the SSG report. Not because they aren’t smart. The members of the study group recommend that the United States should reverse its plans for a military withdrawal in northeastern Syria and focus on stabilization efforts in that area, oppose normalization of relations with the Assad regime, pressure the Russians to support a political settlement that is acceptable to the United States, and push the Iranians out of Syria. The group also recommends cooperating with Turkey and addressing its security concerns, working to relieve the humanitarian crisis in Idlib and addressing the terrorist threat there, and finally focusing attention on the humanitarian crisis in Syria as a whole and supporting countries that are hosting large numbers of Syrian refugees.

At a level of abstraction, what the authors recommend is eminently reasonable. But given the political context in which they have been offered, most of them were dead before the report was published. The recommendations section is quite revealing in this regard. It starts out declaring, “The Syria Study Group believes that sound U.S. policy toward Syria demands sustained political commitment by the senior leaders of the U.S. government, as well as a strategy that aligns means and ends.” Yet the members of the group know this is not going to happen—and they admit as much. In the next paragraph, they admit that “the United States is unlikely to dramatically elevate the priority it places on Syria.”

The authors are thus left to exhortation, proclaiming, “America should not stand idly by.” As they readily acknowledge, America will almost certainly do just that, perfectly reflecting the transition underway in U.S. foreign policy, especially in the Middle East.