For years, Russia used its UN Security Council veto to shield President Bashar al-Assad’s government and military from scrutiny and sanctions for its use of chemical weapons 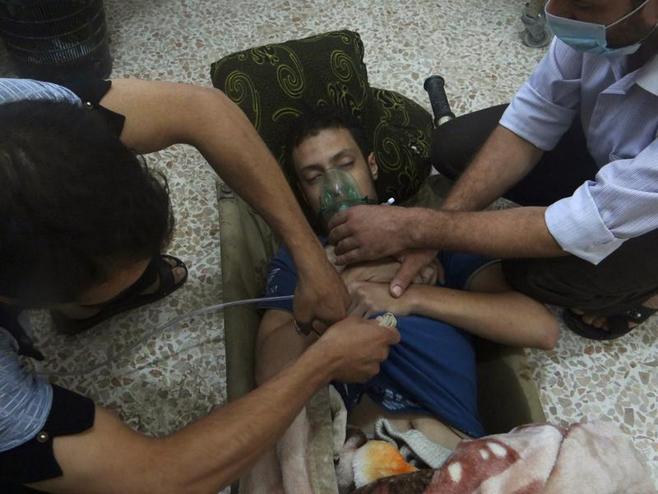 Hundreds of people in the Damascus suburb were killed. Human Rights Watch’s investigation concluded that all evidence pointed to the Syrian government’s likely responsibility for what a later United Nations inquiry determined was an attack using the deadly nerve agent sarin. Although the Syrian government and its ally Russia tried to blame the attack on anti-government fighters – a narrative Russia’s state media and army of social-media savvy conspiracy theorists continue to promote – the UN Commission of Inquiry on Syria said the perpetrators likely had access to government chemical stockpiles. While a separate UN investigation into attacks was not authorized to name the culprits, the chief UN investigator, Ake Sellstrom of Sweden, later said it was “difficult to see” how anti-government groups could have been responsible.

For years, Russia used its UN Security Council veto to shield President Bashar al-Assad’s government and military from scrutiny and sanctions for its use of chemical weapons. Although Moscow initially supported UN investigations, when investigators from the UN and the Organization for the Prohibition of Chemical Weapons (OPCW) blamed Damascus for an April 2017 attack, Russia used its veto to shut down investigations into chemical weapons used in Syria once and for all.

Reports of chlorine attacks against anti-government-held areas continued in 2018. In June, states that are party to the Chemical Weapons Convention undercut the ability of governments to block certain investigations by permanently authorizing the OPCW to attribute responsibility for chemical attacks.

Five years after Ghouta, as the international focus increasingly turns to what is next for war-torn Syria, it should not be forgotten that justice has not been rendered for the 2013 attacks, or the dozens of others. The OPCW needs to flex its new authority in its examination of the attacks as a next step. Then, those responsible for these atrocities need to be held to account, for the sake of the victims and for the sake of Syria.