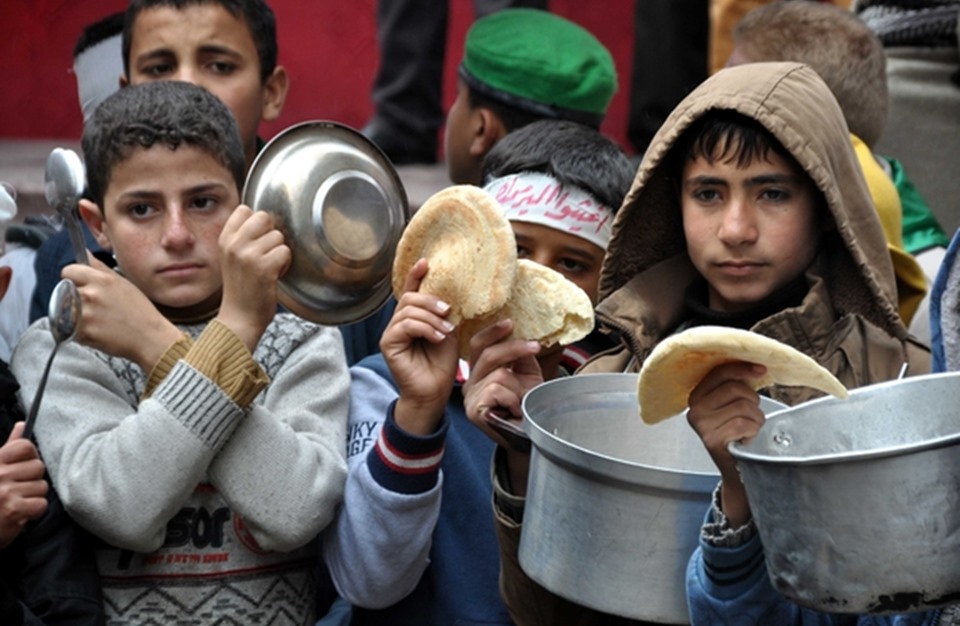 The Syrian Center for Policy Research, an independent, non-profit research institution, launched the “Food Security and Conflict in Syria” report on Tuesday 14 May 2019 in cooperation with the Department of Environmental Health at the Faculty of Public Health Sciences in the American University of Beirut. The research is part of the Center’s program “The Human Status in Syria”.

More than eight years of a morbid conflict in Syria dramatically impacted the food security of the ordinary people in particular and its indicators in general. The food security index dropped sharply by 40 % between the years of 2010 and 2018. The most severe deterioration was registered in accessing food products reaching as low as 46% due to sieges, forced displacement, restrictions on movement and the declining of purchasing power and income sources. Both components of food production and food use declined by 38%, while its sustainability component declined by 36% during the same period. Despite the relative moderate improvement in the index of food access (3%, due to the decline of the absolute number of sieged areas and the intensity of armed operations in 2018), availability, stability and employment components continued to decline.

Food was systematically used as a tool of war by warring parties to achieve political gains even after the decline of the armed operations. The results of the research showed a significant disparity between regions as the most deteriorated figures were registered governorates such as al-Hasakah, Raqqa, Aleppo, Quneitra, Deir al-Zour and Idlib declining at rates greater than the national average.

Despite the recent decline in armed conflict violence and its triggers persist leading to an accumulation of human, material and institutional losses. These triggers accentuate the exacerbation of injustice and humanitarian needs. The conflict has turned Syria into a country whose population suffers from a severe food crisis in terms of availability, access, use, sustainability, and equitable distribution.

Despite the sharp decline in agricultural production where the GDP of Agriculture has fallen by half in 2018 in comparison with 2010, especially for rainfed irrigated crops due to various climatic conditions. Agriculture played the role of an economic protection network during the conflict, providing job opportunities and food sources in the midst of tragic conflict conditions.

The conflict resulted in significant and unprecedented destruction of human, institutional, physical and environmental factors. In terms of manpower, hundreds of thousands of people have been killed, millions injured, about half of the population has been forcibly displaced, and the number of agricultural workers has fallen to half between 2010 and 2018. On the institutional level, several governance systems impacting agricultural policies emerged. These emerging ‘systems’ played a central role in intensifying the conflict by deflecting agricultural products and food resources to the dominant powers, and by violating the rights to protection, food and property. Each warring party targeted the food security of the other. The conflict has led to significant destruction of agricultural material resources, including natural resources, infrastructure, equipment and livestock, directly targeting these resources by shelling, looting, vandalism or indirectly through encroachments on land and forests. The scarcity of production inputs and its high costs such as energy, fertilizers and seeds contributed as well to the deterioration of production.

Siege policies are most dangerous as populations are starved through “collective punishment”.Some 2.5 million people have been under siege between 2015 and 2018, peaking in 2017, with some 970,000 people under siege at the same time, in Al Ghouta, Deir Al-Zour, Aleppo, Rastan and other areas.

Local and international humanitarian initiatives have contributed to the provision of food aid but have provided far less than needed. They have been largely influenced by the conflict forces, which impacted the allocation of these resources serving war economies. Furthermore, these initiatives have over-emphasized the humanitarian relief aspect at the expense of development.

Living costs continued to increase as income sources, wages and job opportunities declined.There is a sharp rise in the consumer price index, as some commodities reached more than ten times its pre-conflict prices. Policies to reduce subsidies for basic commodities such as oil derivatives and electricity, as well as the devaluation of the Syrian pound has contributed to significant prices soaring. Overall poverty rates reached as high as 93.7% at the end of 2017, while abject poverty levels reached 59.1% in the same year.

The results of the research showed a significant deterioration in the quality of available food, and a clear imbalance in food composition during the conflict, this is evidenced by the decline in nutrition indicators for children during conflict, notably in areas that have suffered heavy clashes or sieges. The results indicate a deterioration of the stability component due to increased dependence on imports and food assistance, deterioration of living conditions and sources of income for individuals, as well as environmental degradation.

The findings indicate that the most significant determinant of food security is the institutional performance of the dominant forces. Oppression, exclusion, marginalization, discrimination between the population and the use of violence to undermine the right to access to food and deteriorate food sovereignty. Social capital is highly linked to food security, which indicates the importance of trust, solidarity, cooperation and volunteerism in alleviating the food insecurity of the Syrians during the conflict. The degradation of social relations through polarization, the spread of culture of violence and identity politics, hatred, discrimination and rejection of the “other” have contributed to the deterioration of the food security situation. The results showed a negative relation between the prevalence of conflict economy and food security. This is a key element in addressing the structure of relations, power and wealth in society. The policies of community impoverishment and destruction of living condition basic foundations associated with provision of incentives for loyalty and support.

Chief priority is to stop violence and to dismantle authoritarian institutions through a fundamental transformation process that ensures broad and active community role to achieve participatory, efficient and accountable institutions that address the grievances resulting from the conflict. The second key priority is the respect for rights and ensure human security. Developing a productive economy to substitute the war economy by providing incentives to productive work and focusing on increased rural and agricultural production is a third key priority. Working on reconciliation and investment in building trust and solidarity among individuals is an essential component in addressing the causes of food deprivation.