Stop the carnage: doctors call for an end to Syria hospital airstrikes

As Idlib province comes under renewed attack, Nobel laureates and surgeons issue a plea to save their colleagues and patients 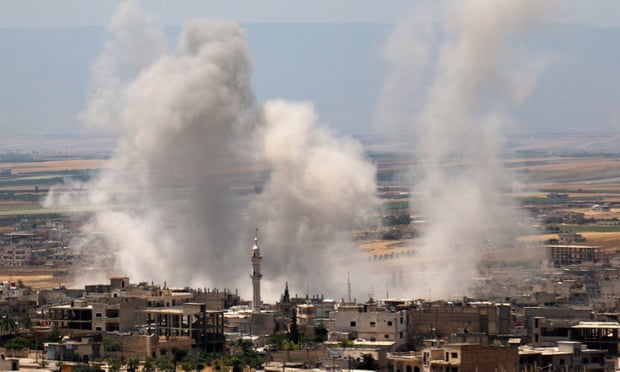 Source: The Observer |By Emma Graham-Harrison and Bethan McKernan

Dozens of prominent doctors have called for urgent action to halt the bombing campaign by Syrian and Russian planes that has targeted more than 20 hospitals in Syria’s north-west, putting many out of action and leaving millions of people without proper healthcare.

Coordinates for many of those hit had been shared with the regime and its Russian backers by the United Nations in an effort to protect civilians. The Syrian opposition were promised war planes would avoid identified sites on bombing raids; instead they have endured more than a month of fierce attacks.

Since late April, in defiance of a truce brokered by Moscow and Ankara last year, regular airstrikes on opposition-held territory in northern Idlib province have killed hundreds of civilians and displaced hundreds of thousands more, rights groups say.

They have also destroyed key parts of the healthcare system, says a letter from doctors around the world published in the Observer. “We are appalled by the deliberate and systematic targeting of healthcare facilities and medical staff,” they warned. “Their [the medical staff’s] job is to save lives, they must not lose their own in the process.”

Signatories include Denis Mukwege, a gynaecologist who won the Nobel peace prize last year, Peter Agre, a physician who won the Nobel prize in chemistry in 2003, MP and doctor Sarah Wollaston, and Terence English, former president of the Royal College of Surgeons, as well as David Nott, a surgeon who works in war zones, and Zaher Sahloul, a Syrian exile, doctor and founder of a medical charity. They urged the UN to investigate the targeting of listed hospitals and asked the international community to put pressure on Russia and Syria to stop targeting medical centres and reverse funding cuts to surviving hospitals and clinics that are now overwhelmed by refugees.

One paediatrician, Abdulkader Razouk, described to the Observer how he and his colleagues evacuated an entire hospital including dialysis patients, mothers in labour and premature babies in incubators, as airstrikes began in their town, at least 12 miles from the frontline. “After the airstrikes, but before the direct attack, we knew the hospital would be targeted,” he said in a phone interview about the Tarmala hospital, which was eventually hit on 10 May. “Only a few medical staff stayed to provide emergency response.”

The airstrike destroyed more than half the hospital and much of its equipment from beds and generators to the operating theatres, emergency services and pharmacy. Staff went back briefly to hunt through the rubble for any supplies that survived the onslaught but the building is now abandoned. “It would be impossible to rebuild and reopen now,” Razouk said. “The airstrikes are continuing and still targeting the hospital until this moment, even though it’s empty.”

The May bombing was not the first attack on the hospital. That came in 2015, first with the Syrian military’s wildly inaccurate barrel bombs, and later by Russian missiles, that destroyed a residential building next door but spared the clinic itself. In 2018 there was a direct hit on the clinic but then it was able to reopen after repairs.

However the damage after the latest attack was so severe that it is beyond repair, and anyway most of the civilians it served have fled, Razouk said.

“This was the worst attack, it has been very tough, there is no possibility whatsoever to continue work there,” he said. “Life can’t return to this area, especially under these brutal attacks. There are no people, not even animals, there’s nothing left in there, it’s like a doomed land. There is no hope to go back.”

He and other staff are opening a new temporary hospital near the Turkish border, where most of the residents of Tarmala have fled and are now living in refugee camps. It will have some of the neonatal incubators and dialysis machines evacuated before the strike, but there is a desperate need for more supplies.

Around 80 medical facilities – including clinics and hospitals – have been shut because of damage in attacks or because of fear they will be targeted, said Mohamad Katoub from the Syrian American Medical Society. The huge number of refugees displaced by attacks has left those that are still operating overwhelmed.

“The tactic of attacking health and other civilian infrastructure in Syria is not new, displacement is not new, these are all chronic issues. But this is the biggest displacement ever, and it is much further beyond our capacity as NGOs to respond,” he said.

Turkey, which backs Idlib’s rebel groups, is already home to 3.6 million Syrians and faces the dilemma of whether or not to absorb any of the newly displaced. A group were reportedly planning a protest march to the border at the weekend.

The de-escalation deal brokered last autumn saved Idlib and the surrounding countryside from an impending government assault. At the time, aid agencies warned that a military campaign would put the lives of 3 million civilians at risk, and trigger the worst humanitarian crisis of an already protracted and bloody war.

But the agreement has unravelled since January, when the hardline Islamist group Hayat Tahrir al-Sham (HTS) wrested control of the area from more moderate rebels.

Damascus and Moscow have said the HTS takeover legitimises the current campaign against Idlib as they are targeting terrorists not covered by the ceasefire deal.

Many civilians in Idlib now feel they have been caught between the harsh rule of HTS and the intensified regime assault, and say that life has all but ground to a halt.

“I was studying at Idlib university but I’ve had to stop going. So has my sister,” said 22-year-old Raja al-Assaad, from Ma’arat al-Nu’maan, which has been under heavy attack.

“Some people have left to try to go to Turkey but the truth is that there is nowhere to go. Nowhere in Idlib is safe. And in my town we already have lots of people who have been displaced from lots of other areas of Syria.”

“All normal life has shut down and there is nothing for us to do except wait for death.”