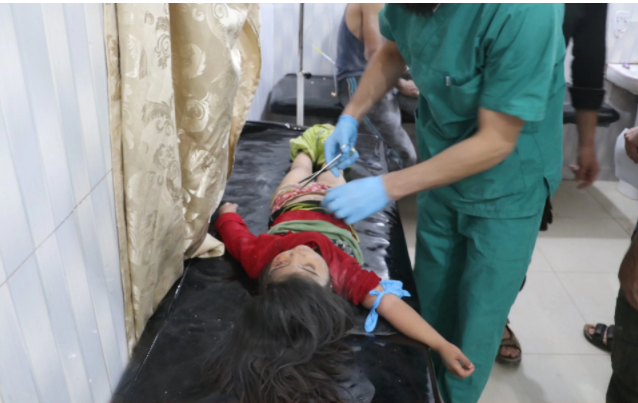 The Syrian government and Russia have in the last month bombed eight hospitals in the rebel stronghold of Idlib whose coordinates were shared with Moscow in the hope of preventing such attacks, doctors say.

The United Nations gave the GPS locations supplied by NGOs operating in Idlib to Russia as part of a “deconfliction mechanism”.

The regime and Russia, which intervened in the war in support of President Bashar al-Assad in 2015, have systematically targeted hospitals and clinics during assaults on opposition strongholds.

Since the government began its offensive on Idlib on April 30, more than 24 facilities have been hit, in what doctors are calling a “record”.

Among the eight that feature on the UN humanitarian office OCHA’s “deconfliction” list was a maternity hospital in the town of al-Atareb which had to evacuate premature babies.

Deliberately targeting medical centres is a war crime under international law.The NGOs had hoped that making the locations public would either act as a deterrent or at least better enable the UN to establish intent should they later be attacked.But they fear it has made little difference and Moscow, seeing no consequences, is continuing to target hospitals with impunity.“Sharing the information with the United Nations did not lead to greater protection,” said Dr Zaher Sahloul, the president of MedGlobal who was recently in Idlib. “If anything people are thinking right now that by sharing this information it’s increasing the risk of targeting the hospitals.”
Mohammed Katoub, advocacy manager at the Syrian American Medical Society (SAMS), told the Telegraph: “We thought at least it would bring some accountability, if not protection. That the perpetrators might think twice if they think they are being watched. But this hasn’t happened.”He said SAMS reported the latest attacks to the UN, but has not had an official response.“In the briefing from Mark Lowcock (Under-Secretary-General for Humanitarian Affairs and Emergency Relief Coordinator) earlier this week, the language was watered down,” he said. “He talked about attacks on health (facilities) but didn’t attribute responsibility.”The civilian death toll is mounting in Idlib, reaching more than 270 over the past month, according to the Syrian Observatory for Human Rights.Doctors warn that the hospitals which remain open are struggling to treat the large numbers of wounded.

zMany have also been forced to go underground in an attempt to avoid air strikes.“The situation is frankly catastrophic,” added Dr Sahloul. “It’s much worse than I expected and I think it may get even worse.”Hedinn Halldorsson, spokesperson for OCHA, said it was “too early” to determine whether health facilities that had been deconflicted had been attacked in the latest upsurge of violence.

However, he told the Telegraph that according to preliminary reports, “some of the locations may have been deconflicted with relevant parties.“The UN is gravely concerned by the number of health and education facilities struck in northwest Syria in recent weeks.”Russia was alleged to have bombed a number of hospitals on the so-called deconfliction list during the offensive on besieged rebel-held Eastern Ghouta early last year.The UN said it would investigate, however, the results of which are not yet known.Karen Pierce, the UK’s representative to the UN, raised the deliberate targeting of hospitals at the Security Council earlier this week.“It is inexcusable that hospitals, schools and other infrastructure have been attacked despite OCHA’s deconfliction mechanism,” she told the Council, where Russian and Syrian members were present.The UN said it would investigate the accusations that hospitals on the list provided to Russia had been bombed and “report back to the Council.”