Syria refugees to face their torturers in German court

To Mukdad, the trial that opens Thursday in Germany’s western city of Koblenz is a way to “raise the voice of the victims, the living and the dead.” 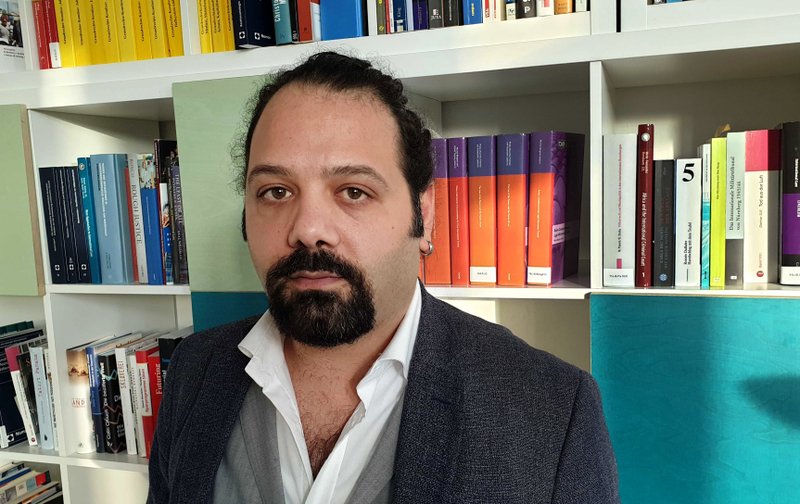 In this Sunday, April 19, 2020 photo Syrian Wassim Mukdad poses for a photograph at the Berlin offices of the European Center for Constitutional and Human Rights, Germany. Together with more than a dozen other witnesses, Mukdad will testify before a German court in the trial of Anwar R., a former member of Syria’s secret police suspected of overseeing the abuse of detainees at a notorious jail near Damascus known as Al Khatib, or Branch 251. (AP Photo/Frank Jordans)

BERLIN (AP) — Six years ago Wassim Mukdad fled Syria, demoralized and fearing for his life as the country spiraled ever deeper into all-out war.

This week, the 34-year-old will come face-to-face with the man accused of running a government detention center where Mukdad and thousands of others were tortured during the early months of the uprising against Syrian President Bashar Assad.

Together with more than a dozen other witnesses, Mukdad will testify before a German court in the trial of Anwar R., a former member of Syria’s secret police suspected of overseeing the abuse of detainees at a notorious jail near Damascus known as Al Khatib, or Branch 251.

German prosecutors last fall charged the 57-year-old R., whose full surname wasn’t released for privacy reasons, with crimes against humanity, murder and rape in a case that human rights activists say marks the first time worldwide that a former Syrian officials is being held responsible for such serious crimes during the long-running conflict.

As a senior member of Syria’s General Intelligence Directorate, R. is accused of overseeing the “systematic and brutal torture” of more than 4,000 prisoners between April 2011 and September 2012, resulting in the deaths of at least 58 people, federal prosecutors said.

A second suspect, identified as Eyad A., will also go on trial accused of contributing to crimes against humanity by enabling the torture and imprisonment of at least 30 protesters in late 2011. The 43-year-old was allegedly part of a unit that arrested people following a demonstration in the city of Douma and took them to Branch 251, where they were severely mistreated.

“I was taking part in demonstrations, demanding freedom and civil society, liberties and democracy. Exactly the same as the whole demonstration movement in that time,” Mukdad recalled in an interview with The Associated Press.

“The second time I was detained, it was in the same branch where (R.) allegedly used to work,” he said. “I faced torture there, during the interrogations.”

For legal reasons, Mukdad can’t talk about the details of his case before the trial opens. But he said what happened to him wasn’t unique.

“We were three friends and we all suffered the same procedures from the beginning till the end,” he said. “And other people in the cells I met also suffered the same. So I knew that it wasn’t only me.”

None of the inmates knew why they were being detained or whether they would make it out alive.

“We were not allowed to contact any lawyers, family members or friends,” Mukdad said. “Nobody tells you anything. It’s not only a physical torture, it’s also psychological torture.”

The defendants’ lawyers could not be reached for comment.

After being released, Mukdad volunteered as a medic in a refugee camp in southern Damascus, only to get detained by al-Nusra, an Islamist armed group linked to al-Qaida, and then again by government forces.

“Starting from 2013, the situation was going very clearly into a full-scale civil war,” Mukdad said.

The government had begun to use chemical weapons. “You think: What could I do anymore? There is no place for any reasonable voice in in this time of total mania.”

He decided to flee Syria a year later, first to Turkey and then, in 2016, to Germany.

Like hundreds of thousands of Syrians who found refuge in Germany, Mukdad tried to create a new life for himself, learning the language and concentrating on music, unaware that human rights groups in Europe were building a case against Syrian officials. It wasn’t until last year that he happened to cross paths with a lawyer in Berlin who asked him to testify against Anwar R.

“This trial is of considerable importance worldwide. The trial will provide an overall picture of the crimes committed by the Syrian government. This knowledge can then be used by others and in other trials,” said Wolfgang Kaleck, head of the European Center for Constitutional and Human Rights that supports 16 Syrians in the case, eight of whom will be present as co-plaintiffs.

The group said the case is the result of a series of criminal complaints submitted over the past four years by almost 50 Syrian torture survivors, relatives, activists, and lawyers in Germany, Austria, Norway and Sweden.

With efforts to bring war crimes cases to the International Criminal Court in The Hague blocked by Russia and China, victims have increasingly looked to courts in Europe to apply the principle of ‘universal jurisdiction’ that allows them to try crimes committed elsewhere. Both France and Germany have issued international arrest warrants for Jamil Hassan, the former head of Syria’s Air Force Intelligence Service implicated in widespread torture.

To Mukdad, the trial that opens Thursday in Germany’s western city of Koblenz is a way to “raise the voice of the victims, the living and the dead.”

“If there is any process to restore part of this dignity for the victims, to acknowledge the suffering, to just say clearly and loudly, this is not acceptable, it’s a gain for the whole of humanity,” he said.

Mukdad said he hopes the defendants receive the fair trial he was denied in Syria. The men, who themselves left Syria for Germany before their arrest in February 2019, remain in jail.