Censured by Britain, Hezbollah is bigger than ever in Beirut

Abu Hussein, and other Hezbollah members, seem more comfortable reverting to familiar territory – the ongoing war with Israel, which has intensified efforts in recent months to stop post-war Syria becoming a stronghold for Iran 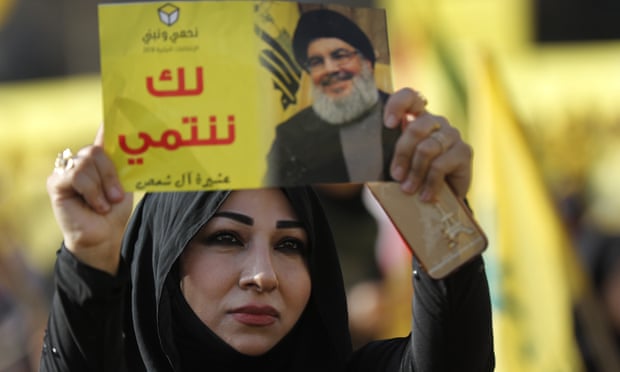 The group has been added to the UK’s terrorist list, but after Assad’s victory in Syria it plays a powerful role in the region

At the back of a room full of marble-covered graves, a woman nods gently as she reads to her dead son. Another mother puts a candle inside a small lantern on top of a tomb. Both wear black chadors, and neither says anything above a whisper. Here the secrets of dead are laid bare in inscriptions; where and when the men were killed, and whom they were fighting for: the most formidable group in Lebanon, Hezbollah.

Between the women, an arched wreath covers three graves to which a trickle of visitors is drawn.Life-size photos of three men stand behind them, with a picture of the only woman buried there, the mother of perhaps the militant group’s most revered figure, its former military chief, Imad Mughniyeh. At times during the last two turbulent decades, the Martyrs’ Cemetery on the edge of Beirut’s southern suburbs has heaved with anger as the dead have arrived from battlefields. But last week an air of calm hung over the graveyard, just as it has for many months in Hezbollah’s surrounding heartland, where after seven polarising years of war in Syria, many residents sense the dawn of a new – but no less foreboding – era.

Last week, amid a push by the Trump administrationUS to isolate Iran, Britain announced it was listing Hezbollah’s political wing as a terrorist organisation, in a move criticised by Tehran on Saturdayas “deliberately ignoring a large part of the Lebanese people and the legitimacy and the legal position of Hezbollah in Lebanon’s administrative and political structure”.

That position has long been obvious – not only here on Beirut’s heavily Shia southern edge, but beyond Lebanon’s borders in Syria. In addition to the 60 or so graves inside the hall, at least another 1,600 have been dug in Lebanon’s Shia villages for Hezbollah members killed in Syria. Nearly all have been buried without fanfare, the losses absorbed by communities accepting the cost of the war, without fully embracing it.

Saved from defeat, Syrian president Bashar al-Assad owes his survival to Russia, and to Iran, the linchpin of Hezbollah in Lebanon. The militant group-cum-power broker has eclipsed Lebanon’s other political players and consolidated its role as the country’s most powerful organisation. Hezbollah’s role in Syria has straddled borders and after safeguarding Assad, Hezbollah has begun to reap a prize far higher than the blood and treasure it has committed. In postwar Syria, Hezbollah and Iran are ascendant; both playing lead roles in shaping what emerges from the ruins of war. In Beirut, where it controls three ministries and, together with allies, 70 of the 128 parliamentary seats, it has a decisive hand in the fragile new government’s most important decisions.

Few Hezbollah members are willing to discuss their role, or that of the group, inside Syria, and those who are choose their words carefully. But outside the cemetery on Friday, one serving member was ready to talk. A veteran of the Hezbollah-led fight to recapture Aleppo from anti-Assad opposition that had seized the eastern half of the city more than five years ago, the man, in his early 20s, insisted on the nom de guerre Abu Hussein.

He first paid his respects to one of the mothers inside, he sat down for a discussion. He reiterated an unflinching belief in the group’s leader, Hassan Nasrallah, while also revealing a fear that Hezbollah’s political role had caused it to do things that did not sit comfortably with him.

“We fought in Aleppo and I can tell you we behaved with honour, while the Syrian military did not,” he said, sipping bitter coffee on the edge of a noisy street. “When we were advancing, there was a building full of civilians. We knew they were there and we would not attack it, even though it was in their way. The Syrian military came along later and their senior officer, did not care at all who was inside. He just leveled it. We saw many things like that.”

Abu Hussein comes from a Hezbollah family, with a surname that wins him patronage across Lebanon. His uncles and brothers are members and some hold leadership positions. He, however, describes himself as “open minded”.

“As I’m getting older, I’m starting to question things more,” he says. “My main concern is Lebanon. It is not everything else. But regarding Syria, we had to go there, because if we didn’t, [Isis] would have come here. If the regime fell in Damascus, it would have weakened us. These are truths. That is why we fought.”

Many Hezbollah members are mindful that those they fought in Syria were almost exclusively Sunnis, a fact which has amplified tensions between Islam’s two main sects in Syria and Lebanon. Tensions remain high elsewhere in the region too, 16 years after the US-led invasion of Iraq which pitched the sects against each other in what was primarily a political tussle that has since been underpinned by identity. “We were not fighting Sunnis,” said Abu Hussein. “We were fighting Isis. They were killing Sunnis, too.”

With the war near an end, and Assad still in place, many in Hezbollah remain unwilling to believe the insurgency against Assad began as a homegrown revolt. “I don’t think that. I know there were local people at the start. But there were others at the end. We did what we had to do. Now we need to get along again.”

Abu Hussein, and other Hezbollah members, seem more comfortable reverting to familiar territory – the ongoing war with Israel, which has intensified efforts in recent months to stop post-war Syria becoming a stronghold for Iran.

More than 1,000 Israeli attacks on mainly Iranian targets inside Syria have gone unanswered by Hezbollah, whose leaders fear the hard won gains of their backers, on Syria’s battlefield, and in Lebanon’s parliament, could easily be lost to any enemy that is eager to take the fight to them.

A second Hezbollah member, with access to senior leaders said the Israeli attacks in Syria had caused carnage, and even confusion among a group that sees maintaining deterrence as a priority. “The Iranian targets in the military bases in Damascus and Homs were annihilated,” he said. “I mean the damage was unbelievable. People where shocked, here and there. It’s caused many discussions.”

As he finished his coffee, Abu Hussein shrugged when asked about the Israelis. “They’re our enemy and they will be for ever. Do you think them arriving and taking that land was right? Is it Palestinian land, or is it for them?For me, my priorities are Lebanon. I will ask questions, I will keep my mind open. Let’s meet again in the summer.”