Extrajudicial Killing Claims the Lives of 1,734 Civilians in Syria in 2020, Including 99 in December 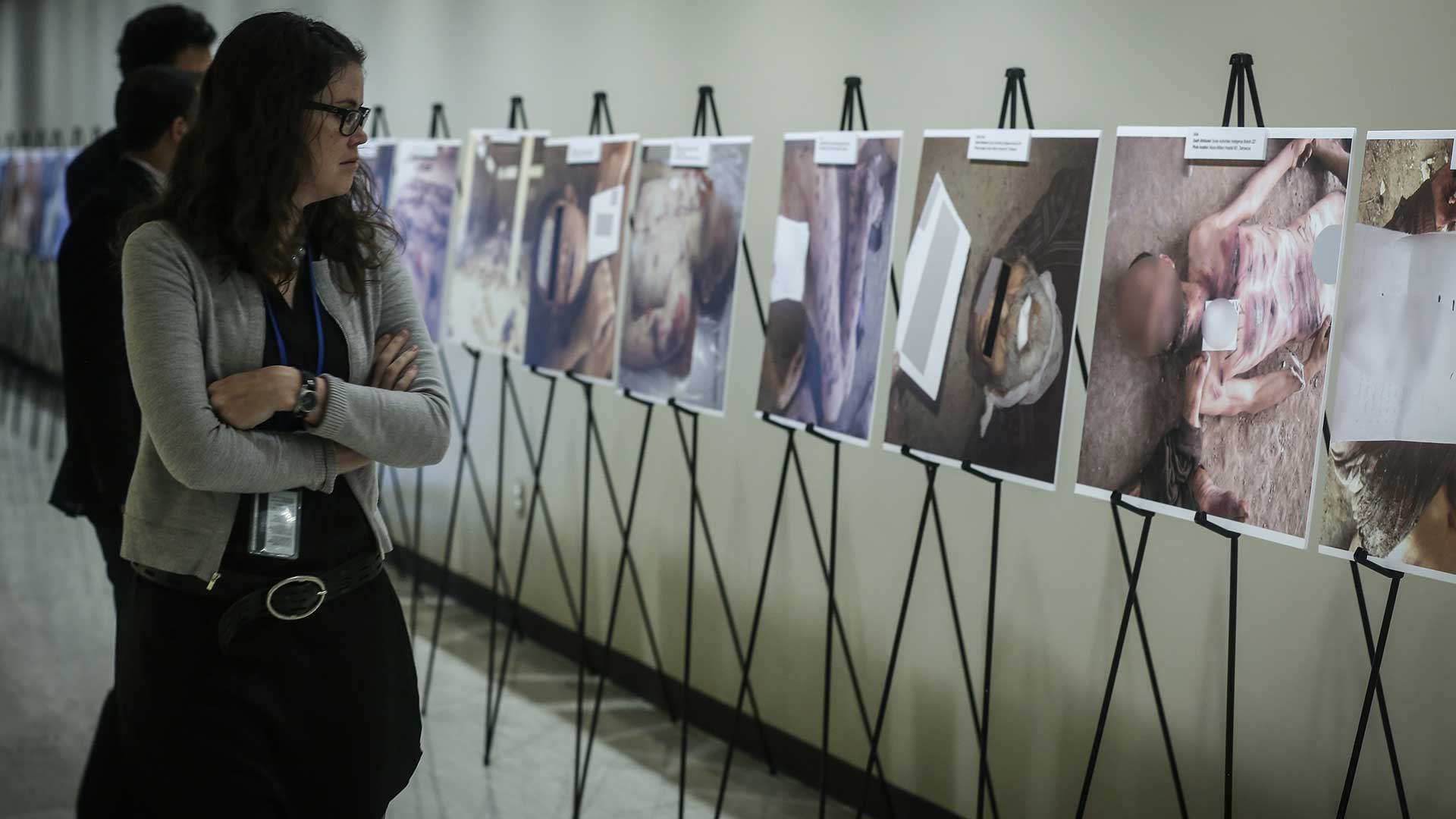 (Link below to download full report)
The Syrian Network for Human Rights (SNHR) announced in its monthly report released today that extrajudicial killing claimed the lives of 1,734 civilians in Syria in 2020, including 99 in December, noting that killings of IDPs and deaths by mines and remote bombings stood out among killings in Syria in 2020.

The 50-page report records the death toll of civilian victims documented killed by the parties to the conflict and the controlling forces in Syria both in the past month of December and in the whole of 2020, particularly focusing on the victims amongst children and women, those who died due to torture, and victims amongst media, medical and Civil Defense personnel, paying particular attention to the most notable massacres committed by the parties to the conflict in this period.

As the report further reveals, the statistics provided for the death toll of victims include those related to extrajudicial killings by the controlling forces in each area which occurred as a violation of both International Human Rights Law or International Humanitarian Law, and do not include deaths arising from natural causes or those caused by disputes between individual members of society.

The report includes the distribution of the death toll of victims according to the perpetrator parties, noting that accurately ascribing responsibility sometimes requires more time and investigation than usual, especially in the case of joint attacks. In addition, in cases where it’s unable to definitively assign responsibility for a particular killing to one of two possible parties because of the area’s proximity to the lines of engagement, the use of similar weapons, or other reasons, the incident is categorized among ‘other parties’ until sufficient evidence is available to conclusively assign responsibility for the violation to one of the two parties.

The report draws upon the ongoing daily monitoring of news and developments, and on an extensive network of relations with various sources, in addition to analyzing a large number of photographs and videos.

The report details the issues that characterized 2020 according to the SNHR’s database of extrajudicial killings, noting that the killing of civilians in Syria has continued for the tenth consecutive year, in massive numbers, indicating the instability of the situation in Syria, and underlining the fact that it is still the most dangerous country in the world for civilians, and remains an exceptionally insecure and dangerous place unsuitable for the return of refugees. The report adds that although 2020 saw a decline in the rates of killings of civilians compared to previous years, with the year seeing an overall rate of more than 80% (the average annual death toll has been about 25,000, if we divide the total death toll by the number of years, so the 2020 figure shows a decrease of more than 80% compared to this average, and of about 50% compared to the 2019 figure or 75% compared to 2018). Despite this, however, SNHR documented the killing of more than 1,700 Syrian citizens, including 326 children, the highest rate of extrajudicial killings in the world.

The report reveals that the decline in the documented death toll for this year is related to several factors, perhaps the most prominent of which are:
• The displacement of nearly 13 million Syrians, including internally displaced persons and refugees.
• The COVID-19 pandemic, which has reduced the movements of the Syrian regime’s army and affiliated Iranian militias.
• The Additional Protocol to the Idlib Agreement between Russia and Turkey, which was signed on March 5, 2020.
The report further reveals that the year started with a very high death rate, with nearly a third of the total documented death toll for the whole year was recorded in January and February alone. Thereafter, in March, the COVID-19 coronavirus broke out in Syria, while the Additional Protocol entered into force on March 6.

As the report notes, another prominent feature marking 2020 in Syria was the death of a large number of victims due to mines, with a continuous stream of fatalities from this cause in almost every month of the year, with the total death toll as a result of landmines in 2020 reaching 109 civilians, including 23 children, in various regions and governorates in Syria; this death toll is the highest in the world from this cause. This indicates that none of the controlling forces have made any significant efforts in the process of removing landmines, in trying to determine their locations and fence them off, or in warning the local population about their presence.
The report adds that 2020 also saw many civilians killed by remote bombings, with the vast majority of these cases being concentrated in areas outside the control of the Syrian regime in northwestern Syria.

As the report notes, the Syrian regime was not satisfied with carrying out extrajudicial killing through aerial and ground bombardment alone, adding to this with killings through torture in detention centers, exacerbated by deliberate medical negligence and lack of basic sanitation and cleanliness in detention centers; the report documented the deaths of 130 victims, including one woman, in the Syrian regime’s detention centers, constituting approximately 83% of the total death toll among victims documented as dying due to torture in Syria in 2020 at the hands of all the perpetrator parties.

As the report reveals, the beginning of 2020 was accompanied by a violent military operation led by the Syrian regime and its Russian and Iranian allies against the areas outside its control in and around Idlib. The cities and residential neighborhoods in these areas were subjected to massive and indiscriminate bombardment, which resulted in dozens of deaths and the displacement of residents of entire cities. The first and second months of the year also saw a marked increase in the death toll.

The report also documents that three of the Civil Defense personnel were killed in 2020, all of whom at the hands of Syrian Regime forces.

The report states that the Syrian regime bears the primary responsibility for the deaths of Syrian citizens due to the COVID-19 pandemic, noting that the Syrian regime and its Russian ally have repeatedly been documented as having targeted, bombed and destroyed most medical facilities in Syria, and killed hundreds of medical personnel, according to the SNHR’s database, with dozens of these lifesaving medics being still classified as forcibly disappeared at the regime’s hands, noting that nearly 3,327 medical personnel are still detained or forcibly disappeared by the Syrian regime.

The report notes that it does not include all deaths, including those caused by the COVID-19 pandemic, as the report mainly documents extrajudicial killings, further noting that the Syrian regime’s Ministry of Health has announced the deaths of 696 cases in Syria due to the COVID-19, describing this statistic as inaccurate, given the absence of any transparency in the various government ministries, and in view of the supervision of the security services on what is issued by these ministries, which is the case with totalitarian regimes.

As the report notes, the evidence collected by SNHR indicates that the attacks documented were directed against civilians and civilian objects. Syrian-Russian alliance forces have committed various crimes ranging from extrajudicial killings to detention, torture and enforced disappearance. Their attacks and indiscriminate bombardment have resulted in the destruction of facilities and buildings. The report notes that there are reasonable grounds to believe that the war crime of attacking civilians has been committed in many cases.

The report stresses that the Syrian government has violated international humanitarian law and customary law, and all UN Security Council resolutions, particularly resolution 2139, resolution 2042, and resolution 2254, all without any accountability.

The Armed Opposition/ Syrian National Army violated UN Security Council Resolution 2139 through carrying out attacks that are considered to violate customary international humanitarian law, causing civilian casualties or accidental injuries.
The use of explosive arms to target densely populated areas reflects a criminal and wholly deliberate mentality intended to inflict the greatest possible number of deaths, which is a clear contravention of international human rights law and a flagrant violation of the four Geneva Convention (articles 27, 31, 32).

The report calls on the Security Council to take additional steps following its adoption of Resolution 2254, and stresses the importance of referring the Syrian case to the International Criminal Court, adding that all those who are responsible should be held accountable including the Russian regime whose involvement in war crimes has been repeatedly proven.
The report also requests that all relevant United Nations agencies make greater efforts to provide food, medical and humanitarian assistance in areas where fighting has ceased, and in internally displaced persons’ camps, and to follow up with those States that have pledged voluntary contributions.

The report calls for the implementation of the ‘Responsibility to Protect’ after all political channels have proved fruitless through all agreements, the Cessation of Hostilities statements, and Astana agreements that followed, stressing the need to resort to Chapter VII, and implement the norm of the ‘Responsibility to Protect’, which was established by the United Nations General Assembly.

The report recommends that the international community should work to launch projects to create maps revealing the locations of landmines and cluster munitions in all Syrian governorates. This would facilitate the process of removing them and educating the population about their locations.

The report calls on the Independent International Commission of Inquiry (COI) and the International, Impartial, and Independent Mechanism (IIIM) to launch investigations into the cases included in this report and previous reports, and confirms the SNHR’s willingness to cooperate and provide further evidence and data, with the report calling them on to focus on the issue of landmines and cluster munitions within the next report.

The report also calls on the United Nations Special Envoy to Syria to condemn the perpetrators of crimes and massacres and those who were primarily responsible for dooming the de-escalation agreements to failure, to re-sequence the peace process so that it can resume its natural course despite Russia’s attempts to divert and distort it, empowering the Constitutional Committee prior to the establishment of a transitional governing body.

The report also stresses that the Syrian regime must stop the indiscriminate shelling and targeting residential areas, hospitals, schools and markets, as well as ending the acts of torture that have caused the deaths of thousands of Syrian citizens in detention centers, and complying with UN Security Council resolutions and customary humanitarian law.

The report stresses that the states supporting Syrian Democratic Forces should apply pressure on these forces in order to compel them to cease all of their violations in all the areas and towns under their control, adding that all forms of support, military and all others, should be ceased unless the SDF stops all its violations of international human rights law and international humanitarian law.

The report calls on the Armed Opposition and the Syrian National Army to ensure the protection of civilians in all areas under their control, and urges them to investigate incidents that have resulted in civilian casualties, as well as calling on them to take care to distinguish between civilians and military targets and to cease any indiscriminate attacks.

Lastly, the report stresses the need for humanitarian organizations to develop urgent operational plans to secure decent shelter for internally displaced persons, and to exert efforts in landmine clearance operations in parallel with relief operations whenever the opportunity arises.