Civilians in some places have had to abide by HTS’s rules and, in May, the NLF was forced into an alliance with HTS to fend off the current regime assault. Estimates of HTS’s strength vary from about 15,000 to 30,000 fighters 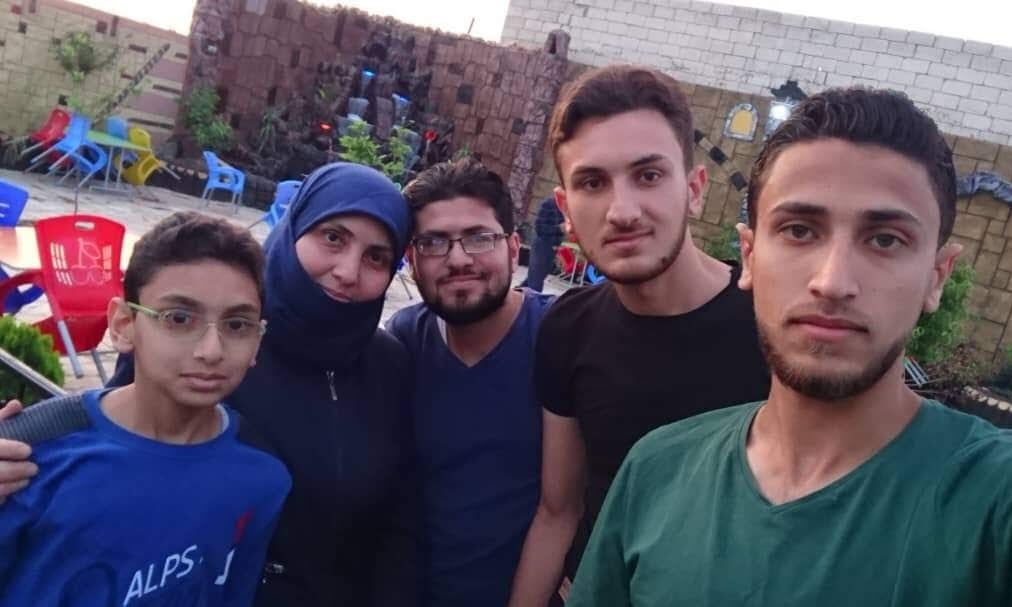 Noor al-Dein al-Dimashqi lost her husband when a Syrian government airstrike obliterated a marketplace in Idlib province last month, killing 38 people. Now she longs for the small moments they used to share.

“What I miss most is drinking our morning coffee together,” she says. “We built a life over 30 years and endured so much together. Death’s taste is bitter and hard to accept. Perhaps it’s the only thing humans never get accustomed to.”

Dimashqi, 45, never expected to end up in Syria’s Idlib province, caught between President Bashar al-Assad’s airstrikes and the power struggles between moderate rebel groups and extremist Islamist factions. The tide of Syria’s war has now firmly turned in the government’s favour, shrinking the geographical scope of the fighting.

Aid agencies say, however, that the threat posed to Idlib’s 3 million-strong population since the regime launched a new campaign for the area in April, could trigger the biggest humanitarian catastrophe yet of a conflict already remarkable for the scale of its civilian suffering.

In 2011, Dimashqi was living with her husband and five sons in Ghouta, on the outskirts of Damascus. She had left school at 15 to get married – too young, she says – but managed to build a happy middle-class life with her husband, Abu Saleem. He ran a private park, and all five of their children were supposed to go to university.

After eight years of civil war, her life has changed beyond recognition. Since they were swept up in the giddy first days of the revolution, the family has faced nightmare after nightmare: torture, imprisonment, siege, starvation and multiple displacements. They lost a son, 22-year-old Saleem, in 2014.

When the rebel enclave of eastern Ghouta finally fell to the regime in March 2018, pro-government members of the family convinced Dimashqi’s husband to go to Damascus under an amnesty for rebel fighters. But, afraid of living under Assad again, she and her four surviving children chose to join approximately 1.5 million other Syrians shuttled into north-west Idlib province, the last part of the country without a regime presence.

Her husband eventually decided that Damascus wasn’t safe and paid a smuggler $2,000 to take him to rejoin his family last December. But Idlib, then ostensibly protected by a ceasefire, turned out to be no safe haven either. He was killed when an airstrike hit the city of Maarat al-Numan on 22 July. “Omran [the couple’s third child] was there in Maarat al-Numan when the airstrike on the market happened,” says Dimashqi. “He rushed over and shouted again and again for his father, begging him to say he was alive. But he wasn’t. The bombing is incessant. It’s becoming exactly like what we witnessed in Ghouta.” 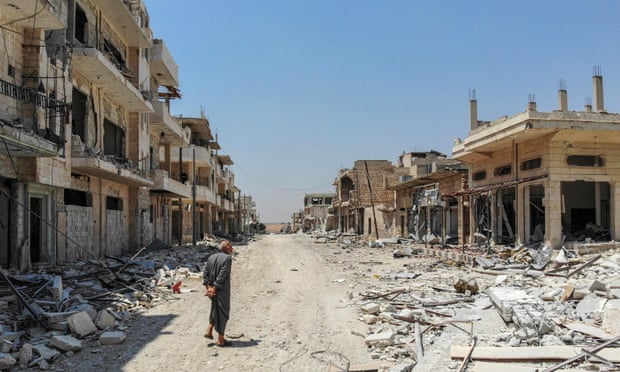 Khan Sheikhun, a town in Idlib province, at the beginning of this month. Government forces took control of the town on 21 August. Photograph: Omar Haj Kadour/Getty

Many civilians living in Idlib province, like Dimashqi, are Syrians who have never picked up a gun but are sympathetic to the rebel cause. Their lives have been affected by violence again and again. A third of the population are children. And yet, according to Damascus and its Russian and Iranian allies, they are all jihadist-allied terrorists. With the Turkish border closed to refugees, there is nowhere left for them to go.

“The regime and Russia push the ‘terrorist’ narrative for a very simple reason: they genuinely believe it. For years now, Idlib has been the dumping ground for irreconcilable fighters and civilians, all of whom, for whatever reason, refused to consider a life in regime-held territories,” says Charles Lister, director of the Countering Terrorism and Extremism programme at the Washington-based Middle East Institute.

Jihadist groups had a presence in Idlib even before Syria’s civil war broke out. During the conflict their growth has been motivated by many factors, including the relentless savagery of the regime in the battles for Aleppo, Deraa, Homs and Ghouta.

A fragile ceasefire in Idlib brokered by Russia and Turkey fell apart after Hayat Tahrir al-Sham (HTS), a jihadist umbrella group that grew out of al-Qaida’s Syrian affiliate, wrested control of the province from the Turkish-backed moderate National Liberation Front (NLF) in January.

Civilians in some places have had to abide by HTS’s rules and, in May, the NLF was forced into an alliance with HTS to fend off the current regime assault. Estimates of HTS’s strength vary from about 15,000 to 30,000 fighters.

The area has been under sustained air and ground attack for four months and the civilian cost has been brutal. About 500,000 people have fled their homes, many to camp out on the Turkish border. At least 45 schools and 42 health clinics have been targeted by violence, according to the International Rescue Committee, as well as bakeries and marketplaces. At least 881 civilians and more than 2,000 rebel combatants have died, along with 1,400 pro-Assad troops.

If Assad, blocked by Turkey, struggles to retake Idlib from HTS, the options for those inside the province remain bleak. Fears are growing that the area could become another Gaza Strip – sealed off from the outside world and ruled by an unpopular, repressive militant group.

The international community, however, has largely stood by and watched as the predictable crisis in Idlib has unfolded.

“The Assad regime has understood that, in the western imagination, the fear of terrorist attacks always supersedes humanitarian concerns. For years, the international community sat on the sidelines of the Syrian conflict as the regime methodically suppressed all civic opposition and depopulated swathes of supposedly oppositionist territory. 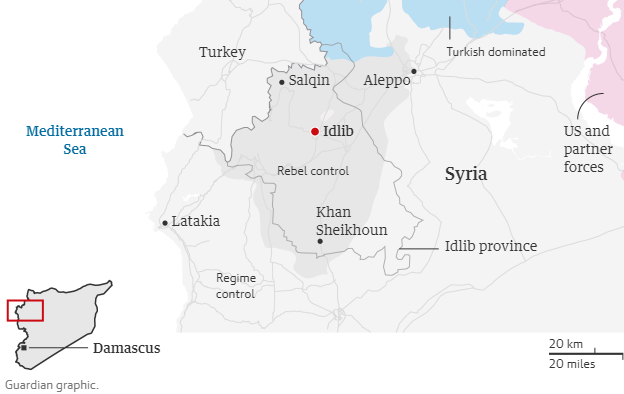 “After eight years of war, it has become clear that there is no cruelty the Assad regime could inflict that could trigger meaningful international action,” says Tobias Schneider, a research fellow at the Global Public Policy Institute in Berlin.

For Dimashqi, home and her dreams for a future in 2011, now feel far away. “The revolution was great in the beginning,” she said. “We took to the streets demanding freedom. I wanted to be a nurse in the Free Syrian Army. I encouraged my husband and children to go out and protest, to join the FSA to defend innocents against the regime.

“So much has changed since then. I lost my beloved Saleem and his father. I lost my home. I’m far away from my sister in Ghouta. The war is not over. But I feel like I am already defeated.”