Hussien says “We were about two thousand people including women. The first checkpoint of the regular forces took photocopy for our IDs and ordered us to chant for the president in order to atone for our sins, as they said” 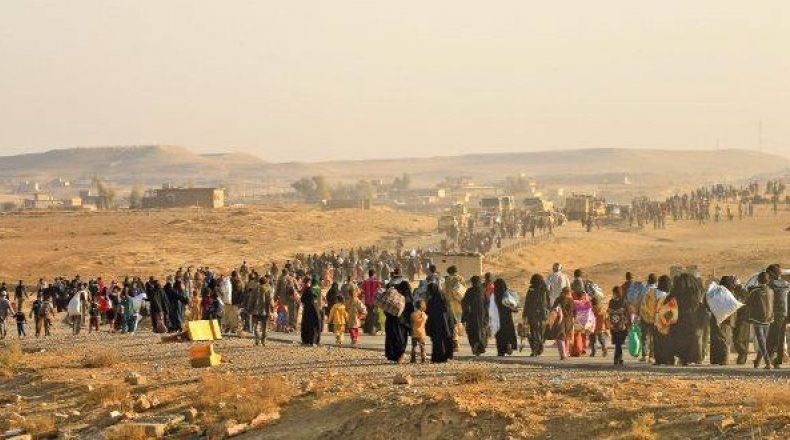 The living conditions of the IDPs and refugees force some of them to return to the Syrian government held areas despite the risks. That what pushes JFL to emphasize on the need for continuation of humanitarian aid inside Syria and the neighboring countries, and to work on reaching a sustainable political solution, under United Nations auspices.

Long years of displacement, and control of the Syrian regular forces pushed hundreds of civilians to make reconciliations with the Syrian government in order to return to their houses and jobs.

The reconciliation means, according to the documents signed by those who desire to make reconciliation inside the security branches, to pledge not to back to riot, sabotage, terrorism, committing acts against public and private property, attack against army ad security forces, and taking up arms.

According to the interviews conducted by JFL researchers, there is no dedicated place for conducting the reconciliations as they may be done in any security branch. This depends on the people close to the government, who are the link between the returnees and the security branches.

JFL documented the detention of one person in the eastern countryside of Deir Ezzor after his returning and making reconciliation. JFL also documented the detention of one person for fifteen days following his return to the Syrian government held areas. After he was released and moved to the displacement areas, he was able to make reconciliation throughout people close to Syrian security apparatuses.

Various reasons led civilians to return to Syrian government held areas. Abo Ammar and Ahmad[1] told JFL that high prices in the displacement areas, especially after disbursing all savings to reach those areas, was the major reason for returning.

The decision of withdrawal of troops from Syria caused a shock to displaced civilians from Deir Ezzor as close persons to the Syrian government promoted rumors about close recapture by the regular forces especially for the areas of north of Euphrates River in order to push the populations towards making reconciliations and return to their areas and no harm would come to them.

As for Saber, Mohammad, and Hussien[2], displaced persons from Deir Ezzor, the US president’s decision pushed them, and others, for making reconciliation especially those who participated in anti-government acts. In case of re-control of regular forces, there is nowhere to run from detention. Abu Mohammad[3]says “ Following withdrawal decision and allegations of SDF for potential understanding with the Syrian government and giving no attention to the destiny of civilians despite the fact that lot of displaced people are pursued by the Syrian security apparatuses, I decided to make reconciliation”.

Making the Decision of Returning:

Some of those who made reconciliations told JFL about this mistrust in the Syrian government and its promises. This is what led them to think deeply before making the decision to return to the government held areas. Despite the assurances of the government, even thinking about detention by the security apparatuses makes this decision very hard to be taken.

Abo Ammar called two persons, who are close to the Syrian security apparatuses, and they advised him to return, yet he decided to take longer time in thinking about it. Ahmad communicated with National Defense Militia that subordinate to regular forces, and another person who is close to the government in Damascus, and they helped him in passing though the checkpoints and reaching the military security branch along with making the reconciliation.

Due to limited options, Abo Mohammad headed towards the regular forces held areas in Deir Ezzor. He says “A person received me, who was managing the repentance course held by ISIS. He talked about the importance of reconciliations. They ordered us to chant the name of the Syrian president. We were about 300 people”.

Some people paid 10,000SYP to members or close persons to the security apparatuses only for checking if they are pursued or not. The reconciliations promoters in the SDF held areas were the first cycle for those who desire to return as the former explain the benefits of the reconciliations and promise everyone who desire to return not to be harmed, then to be linked with other persons in the regular forces held areas in Deir Ezzor.

Mohammad says “I headed with seven persons towards the government held areas. Regular forces and Russian soldier’s checkpoint stopped us. They gave us documents and ordered us to keep going to Deir Ezzor city. We headed to a school where there was a joint committee of security apparatuses”.

Hussien says “We were about two thousand people including women. The first checkpoint of the regular forces took photocopy for our IDs and ordered us to chant for the president in order to atone for our sins, as they said”.

Instability and Lack of Trust in Government despite Reconciliation:

Fearing from enrolling their sons in the compulsory or reserve military service, or fearing from any security prosecution, many people who make reconciliations do not bring their sons to the government held areas. Some of them are enrolled in their jobs and at the end of the week they return to visit their families in the displacement areas, some are waiting for conditions to get better, and others are not believing the government promises and are still testing its seriousness. Saber says “I still feel fear inside me despite the reconciliation. I feel that who desires to return among those who fought against the regular forces previously has to fight within its forces”. Mohammad says “ I do not believe in the government promises. I went back to areas of displacement and the document of reconciliation is nothing but a last choice to be resorted to. I do not intend to go to the regular forces held areas”. Hussien does not trust in the Syrian government and he believes that in case there are no Russian soldiers in the first military checkpoint, he would be beaten. He says “I do not advise the gun-toting people or those who participated in protests to return. Whoever enters the Syrian government jails, he may die before his file is even opened”.

The Most Prominent Charges against some Returnees:

Although some people did not participate in any anti-government activity, yet they faced charges during making the reconciliations, and this what happened with Abo Ammar and Ahmad, who were accused of having links with ISIS during the latter’s control on Deir Ezzor.

The head of the security branch asks the person who desires to make reconciliation about the areas of displacement, conditions, people he knows, people who have links with armed opposition groups or extremist groups along with blaming him for being disloyal to the state. He also advises him to stay at home and take care of his children. Then he asks him to go to another room to complete his documents and sign, this is what happened with Ahmad.

According to what was confirmed by the witnesses, each returnee who completed his reconciliation procedures is to be given a document that allows him to move in the Syrian government held areas without being prosecuted. After six months, each returnee who has to serve in the compulsory or reserve military service should be enrolled within the Syrian government forces.

Prior giving this document, the returnee is given a temporary document that enables him to pass through the checkpoint. Some returnees are given stamp on their hands to prove that he made the reconciliation until his name is circulated to all security branches.