Scorched earth: How a decade of war destroyed Syria’s farmlands

Cluster bombs, mines and other remnants of war are a daily danger for Syrian farmers as well as leaving a toxic legacy that could contaminate the soil for decades.

In rebel-held northwestern Syria, damage caused by Russian and Syrian government forces means the farmlands of Ahmed al-Amin and his neighbours are no longer suitable for cultivation.

“A Russian ballistic missile fell last month, destroying olive trees that are about 30 years old,” Amin told Middle East Eye from his home in Jabal al-Zawiya, in the south of Idlib province.

“Indiscriminate shelling has swept away the soil, making farmlands rocky and unfit for agriculture. The farmlands are filled with remnants of war. Perennial trees have been cut down after being hit by shrapnel that spoiled their fruit,” he said.

For farmers working to restore their lands to productivity, there are potential hazards with every step, posing a threat to more than just their livelihoods.

In April, unexploded ordnance and improvised explosive devices killed at least three civilians and injured at least five more in northwestern Syria, according to the United Nations Office for the Coordination of Humanitarian Affairs.

In a report in March, the Syrian Civil Defence group, commonly known as the White Helmets, warned that cluster bombs posed the greatest danger to civilians because of their extensive use by Syrian government and Russian forces.

The group said it had documented the use of 11 kinds of the internationally prohibited weapon, and accused pro-government forces of using mines and cluster munitions as part of a “systematic policy aimed at causing the greatest possible harm to the population,” and preventing the displaced from returning to their homes and cultivating their lands.

The group said it had responded to 20 explosions caused by remnants of war in 2021 and the first three months of 2022, which had killed 15 people including eight children and injured 27 others.

On Wednesday, the White Helmets said a boy was seriously injured in an explosion on farmland in Korin village, in southern Idlib. 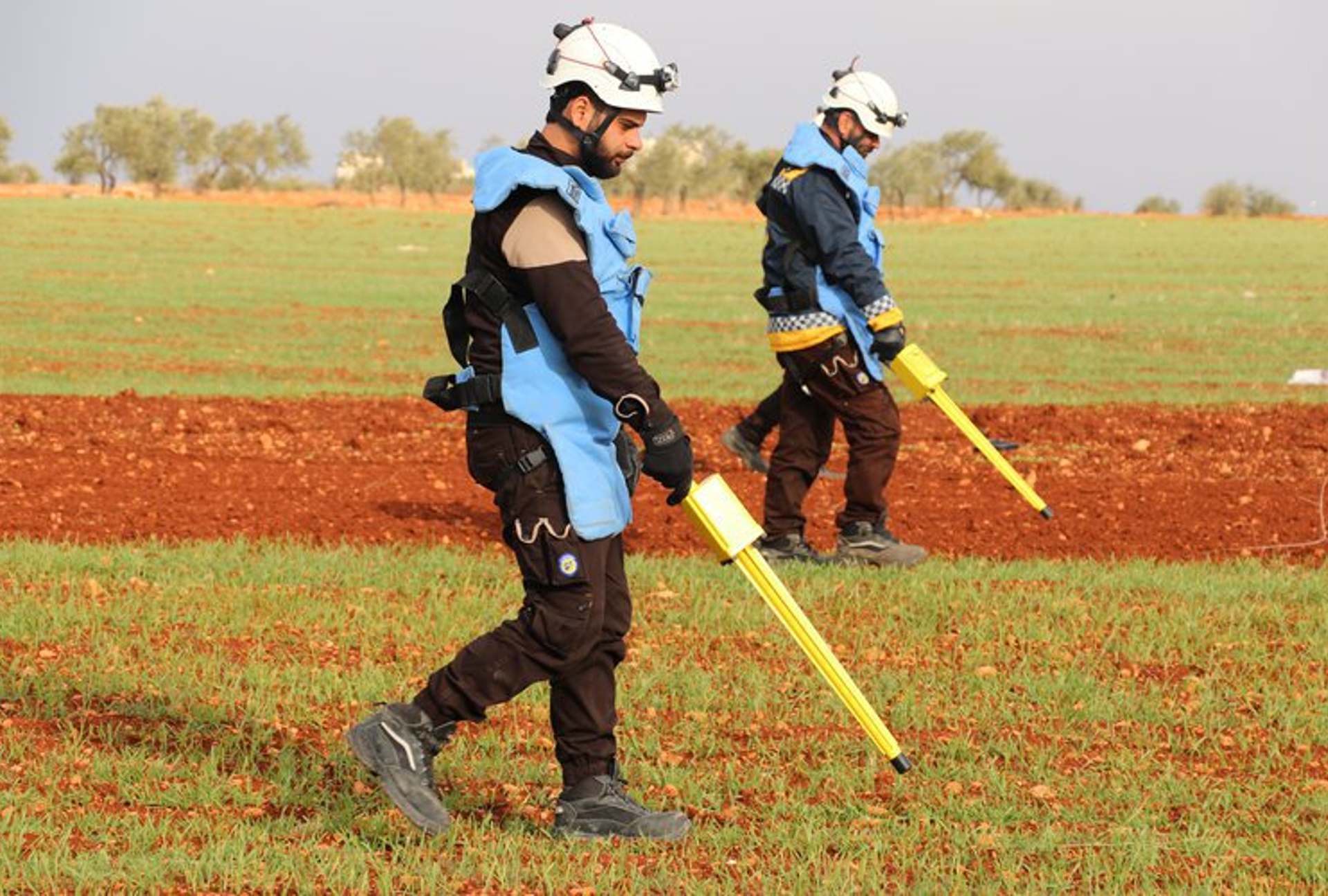 The group said its UXO (unexploded ordnance) teams in northwest Syria had so far disposed of more than 23,000 munitions, including more than 21,000 cluster bombs, at the cost of the lives of four White Helmets volunteers.

Ahead of the harvest season, it urged farmers not to tamper with remnants of war and said it had intensified awareness campaigns to educate civilians about the danger of unexploded ordnance.

Thousands of farmers like Amin now face a choice between risking their lives to revive their lands or abandoning a way of life that in many cases has sustained their families and communities for generations.

In the Afrin region, now controlled by Turkish-backed rebels, many farms lie deserted after farmers abandoned them because of the dangers posed by thousands of undetected mines.

The area was heavily mined by Kurdish People’s Protection Units (YPG) forces before their withdrawal from Afrin in the face of a Turkish military offensive in early 2018.

Mines have been detonated by tractors tilling the soil, killing or injuring farmers and often destroying vehicles at a catastrophic economic cost.

On other occasions, mines have been exploded by passing herds of livestock, killing dozens of animals.

Mines are still a danger in areas now back under Syrian government control. Previously fertile lands near Damascus, once populated by crops and trees, were largely destroyed before being recaptured by government forces in 2018.

“Much of the farmland is still deserted because the government is not making any effort to clear mines and the unexploded ordnance,” a former farmer who worked in the area told MEE.

“These conditions apply to most agricultural land in large areas that the government has retaken in different parts of the country since 2014.”

The Syrian government periodically posts updates about operations to detonate explosives it blames on “terrorists,” a term it uses to refer to Syrian opposition fighters, as well as footage of military exercises on restored farmland, usually in former opposition strongholds in the north of the country.

But in a new report mapping out the impact of Syria’s decade of war on agricultural lands in the northwest, the French-based Radio Rozana found that all parties to the conflict had contributed to the destruction and pollution of land, soil, crops and trees.

“Land was expropriated for military control, trees were cut down, and deadly experimental weapons were dropped on civilian and agricultural areas,” said the report, which was produced in collaboration with Unbias the News, a Germany-based news company.

The report highlighted Russia’s role in the conflict as Syrian President Bashar al-Assad’s main ally. It said Russia had made Syria a testing ground for new weapons, citing a Russian state media report in 2018 in which Sergei Shoigu, Russia’s defence minister, said his country’s forces had tested 210 weapons in Syria. 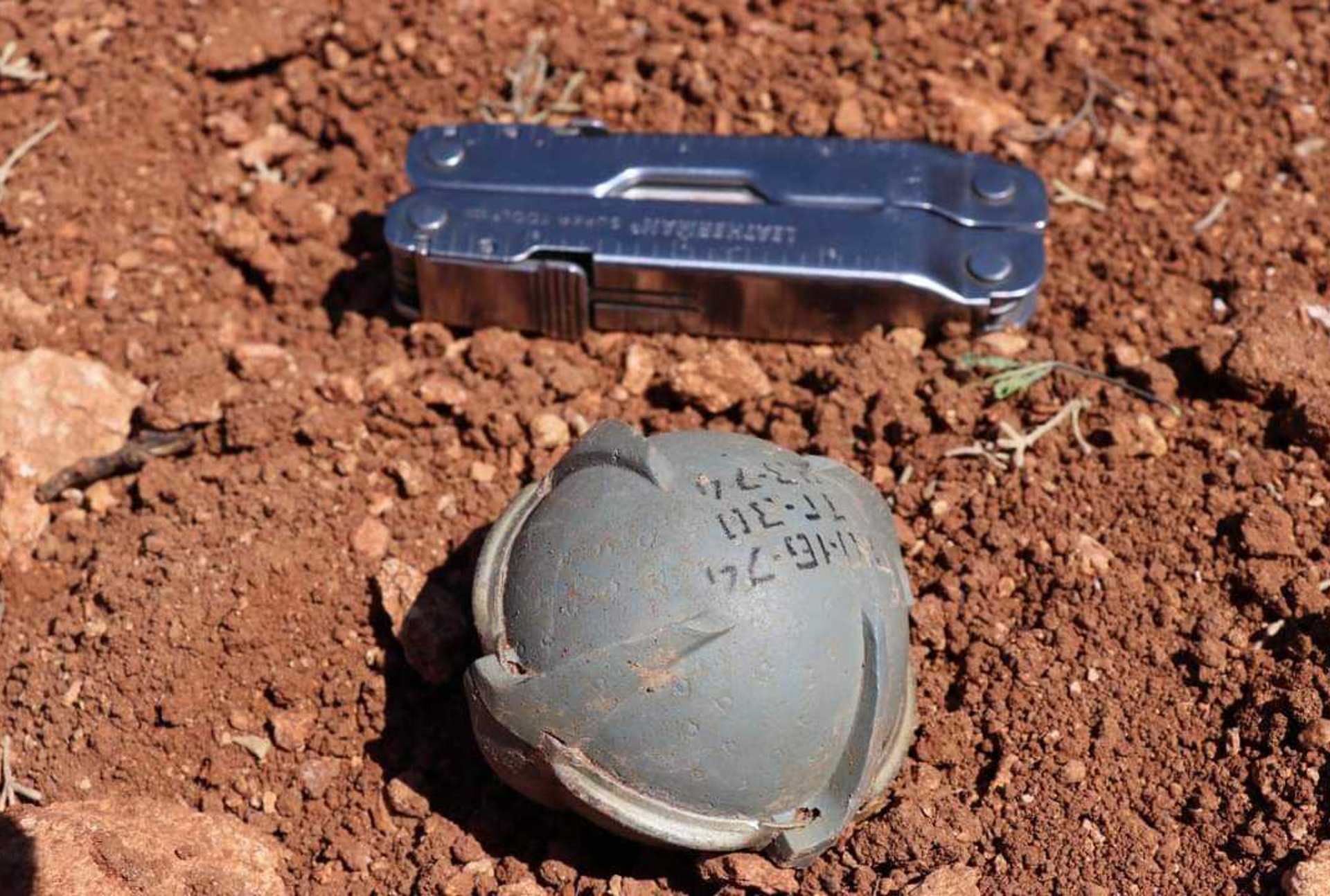 The report said pro-Syrian government forces had waged a “scorched earth” policy, which Syrian opposition officials estimated had destroyed 110,000 hectares in the northwest.

But it found that Syrian rebels and other forces involved in the conflict had also caused significant environmental damage.

It said Turkish-backed rebels in Afrin had burnt and uprooted about 280,000 olive trees in Afrin, including some that were more than 60 years old.

It also cited the case of a farmer in the town of Morek, near Hama in west-central Syria, who said that Turkish forces stationed on his land had cut down pistachio trees and bulldozed much of the area to construct defences, leaving the land unfit for agriculture.

Another farmer based near Aleppo told a similar story, describing how Turkish forces had turned part of his land into a military base without his permission.

Turkey built scores of military bases across northwestern Syria as part of a de-escalation agreement with Russia to secure a ceasefire in the region in 2018.

For Syrians, the impact of the devastation of the country’s agricultural lands is immediate and life-threatening. About 12.4 million Syrians suffer from food insecurity, and more than 90 percent of the population lives below the poverty line, according to the United Nations World Food Programme.

But the consequences will also be felt for generations to come.

Radio Rozana’s report cited research by the United Nations’ Food and Agriculture Organisation, which found that “modern warfare makes use of non-degradable weapons of destruction and of chemicals that can remain in the affected soils for centuries after the end of the conflict”.

It described the “Zone Rouge” area of northeastern France, which was deemed to be unfit for human habitation after the First World War and where the soil in some areas remains contaminated by high levels of dangerous metals and chemicals as a consequence of battles fought over a century ago.

Experts say that removing unexploded ordnance is only the first step towards restoring Syria’s farmlands, with laboratory analysis also required to establish whether the soil itself is safe for animals to graze and crops for human consumption.

Fadi Obeid, an agricultural engineer living in Idlib, said: “The heavy elements that make up explosives are absorbed by the soil, and then transmitted to humans, and, if the percentage of heavy metals exceeds the permissible limit, it may lead to cancer, and distortions are also transmitted to the animals, sheep and cattle, whose milk or meat humans feed on, besides the fear of killing farmers if it explodes.”