The violations varied, including five massacres and no less than 82 attacks on civil vital centers, 17 places of worship, 19 schools, six medical facilities and four markets 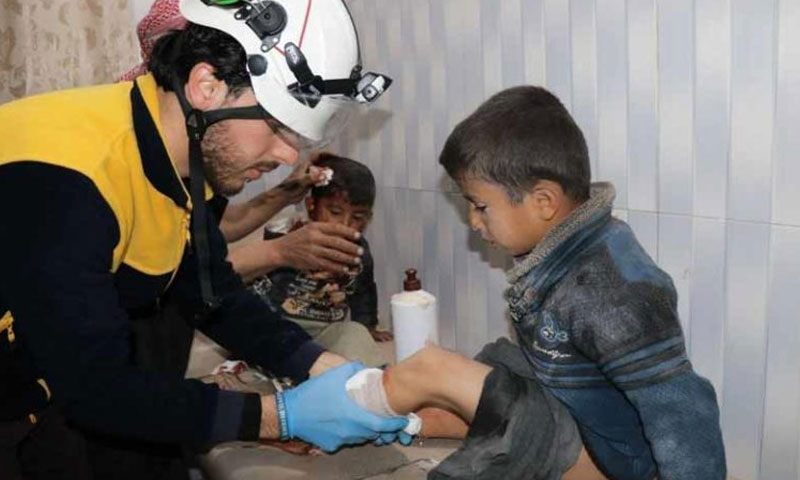 In sync with the ongoing shelling that is targeting Idlib governorate, the Syrian Civil Defense/White Helmets is organizing a series of instruction-based campaigns in the bombarded areas, through which it aims to raise the civilians’ awareness and minimize the harm affecting them due to the military operations initiated by the Syrian regime against the area.

Since mid-March, the Civil Defense started expanding its public information campaigns, focusing on enhancing the civilians’ awareness of the procedures to follow in case of being shelled with phosphorous bombs in particular.

The campaigns included posting instruction videos on the social networking sites and the platforms of the Civil Defense on “Facebook” and “Twitter,” in addition to the posters that have been put up on the walls of the principal streets and the distribution of “brochures” to families in the bombarded areas, which highlight the principles of general safety and the procedures to follow upon different cases of shelling.

Ahmad Yazaji, the director of the Civil Defense/ Jisr al-Shugur branch, told Enab Baladithat the campaign covers several areas in Northern Syria, especially areas in the northern and western rural parts of Hama, and the southern rural parts of Idlib.

The Assad’s forces have intensified the attacks on the area since the beginning of February 2019, reaching the town of al-Tamanah, rural Idlib, which was shelled by incendiary phosphorous, as the Civil Defense documented on March 12.

Yazaji added that the Civil Defense, through these campaigns, aims to keep up with action, as it organized an awareness campaign earlier on, when the area was struck with cluster bombs, while the latest campaign necessitated warning people against phosphorous bombs, directly following targeting the town of al-Tamanah with these weapons.

He pointed out that it is of a major importance to inform civilians of the substance used in phosphorus bombs, the harm they might cause, how to take preventative measures against them and how to behave upon getting injured, adding that social networking sites are of the fastest method to reach out to civilians and its is the reason why the Civil Defense chose to publish a series of instructions on to them.

About the use of these campaigns, Yazaji said that they are usually effective and operative, pointing out that people in the targeted areas always have the urge to help the injured persons, but sometimes they do more harm than help, this is where these campaigns play an important role as they inform the people of how to address emergency cases.

Giving an example, he said: “Some people sprinkle water over the skin of people who got injured due to phosphorous weapons, knowing not that water enhances the burns, because phosphorous interacts with the oxygen atoms in water.”

How to behave during shelling or upon being affected by phosphorus munition?

Upon being affected by phosphorus munition:

The bombardment of Idlib is a violation of the “Sochi” deal, concluded by Turkey and Russia in September 17, 2018, which provides for the establishment of a demilitarized zone between the regime-held areas and those controlled by the opposition in Idlib.

The Syrian Network for Human Rights documented no less than 4594 violations of the “Sochi” deal, pointing out in a report it published on March 22 that the violations have caused the death of about 248 civilians, 82 children, one is a fetus, and 43 women included, since the signing of the deal on September 17, 2018, to March 14, 2019.

The violations varied, including five massacres and no less than 82 attacks on civil vital centers, 17 places of worship, 19 schools, six medical facilities and four markets.

The report also documented an attack with cluster bombs and another with incendiary weapons, which have been all initiated by the Syrian regime against Idlib governorate.