Children and babies die as temperatures plummet in Syria

“At least 29 children and newborns are reported to have died over the past eight weeks, mainly from hypothermia, while travelling to the camp or shortly after arrival,” the WHO said in a statement 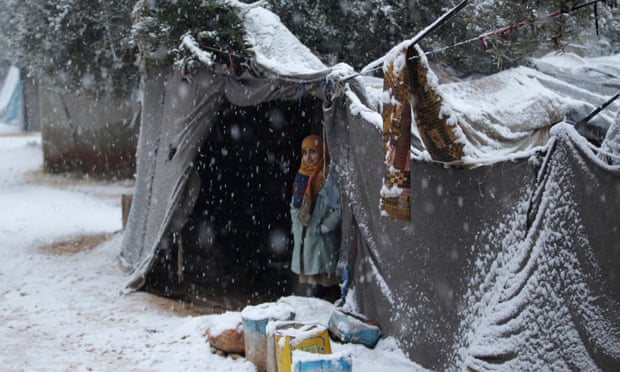 At least 29 children and newborn babies have died in freezing temperatures after fleeing conflict in the last Isis controlled villages in eastern Syria.

The World Health Organization (WHO) said it was extremely concerned about the conditions facing 23,000 people who have taken flight from rural areas of Deir ez-Zor over over the past two months, warning that services are severely overstretched.

Many have walked or travelled in open trucks for days in bitterly cold weather to reach al-Hol, the main camp for displaced people, only to spend several nights in the facility’s open-air reception areas without tents, blankets or heating.

“The situation in the camp is now critical,” the WHO warned in a statement. “The authorities are overwhelmed and struggling to cope with the sheer numbers of people. Many new arrivals are malnourished and exhausted following years of deprivation living under the control of the Islamic State of Iraq and the Levant.”

Al-Hol’s population has tripled in size, from 10,000 to almost 33,000 people, in less than two months. The camp is unheated and there is a shortage of healthcare services, tents, latrines and sanitation facilities.

Those arriving are mainly women and children fleeing rural areas of neighbouring Deir ez-Zor. Kurdish and local Arab tribes, backed by a US-led coalition, are fighting to clear Isis near the town of Hajin in the Euphrates river valley.

Humanitarian access to the camp in al-Hasakah governorate, and to surrounding roads, has been hampered by bureaucratic obstacles and security constraints. Many families were delayed for hours in the open countryside after they were forced to undergo security checks by Syrian Democratic Forces.

“At least 29 children and newborns are reported to have died over the past eight weeks, mainly from hypothermia, while travelling to the camp or shortly after arrival,” the WHO said in a statement.

On Wednesday, the UN under-secretary general for humanitarian affairs, Mark Lowcock, warned that millions of people living in tents or without heating heating face freezing conditions, snowfall and heavy rain. Conditions facing families who abandoned Deir ez-Zor were a grave concern, he said.

“[People fleeing] have been exposed to hostilities, explosive hazards, intense cold and prolonged security screenings, through which they have received minimal assistance,” said Lowcock.

The WHO said the situation at al-Hol camp was critical and called on all parties to the conflict to provide unhindered humanitarian access to people in need of life-saving aid.

Elizabeth Hoff, the WHO Representative in Syria, described the situation in al-Hol camp as heartbreaking. “We are scaling up our efforts in al-Hol, but we need faster approvals to allow us deliver supplies, and we need guaranteed access to both the camp and the roads leading to it,” she said.