“Right now, beneath Baghuz is like a rabbit hole and there is a network of tunnels that the terrorists are using, and our forces need to clear the tunnels very delicately to avoid counter-attacks and explosives.” 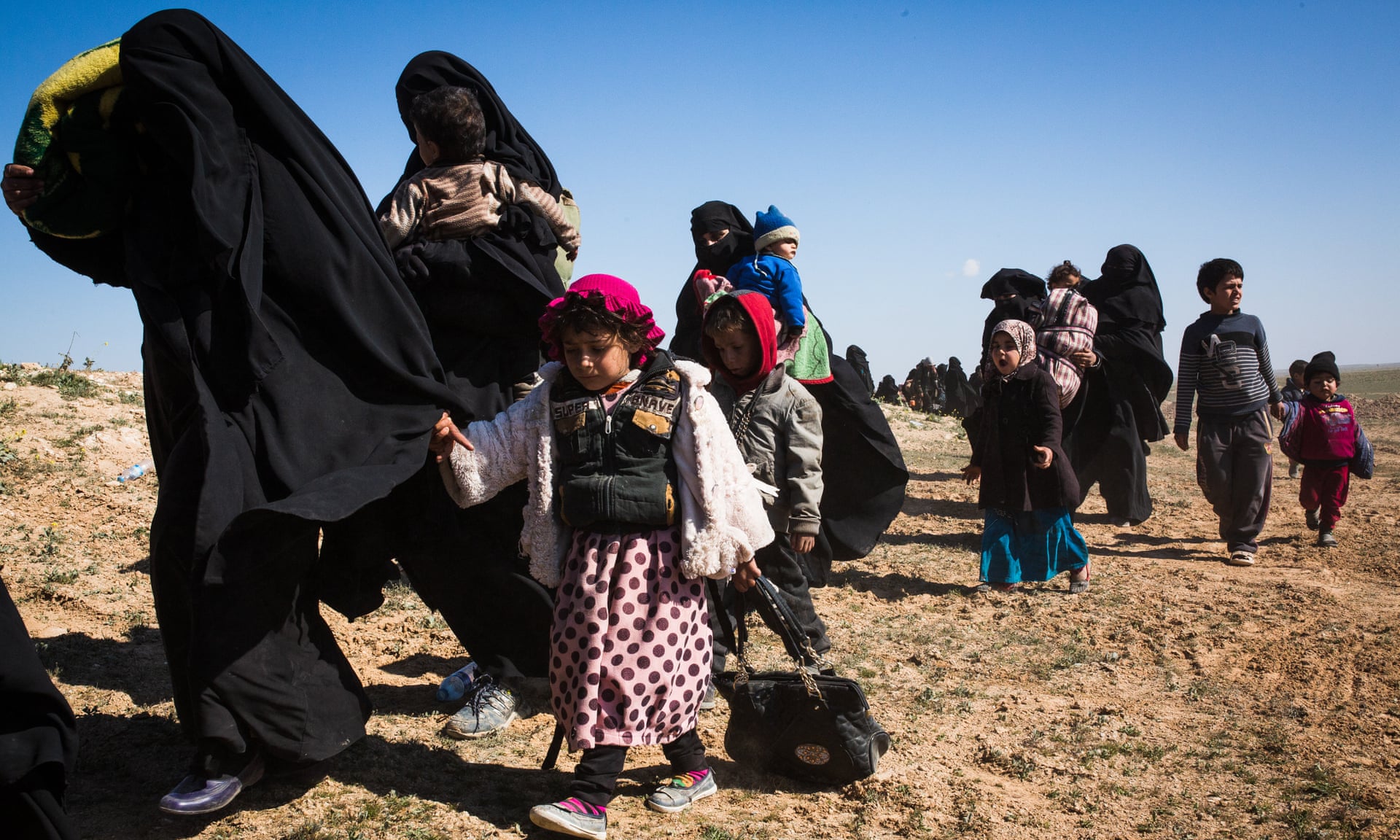 Wives of jihadist fighters wounded as they flee Baghuz, the final Isis enclave in Syria

Islamic State fighters shot and wounded fleeing family members trying to escape from its besieged enclave in Syria, according to a coalition commander, as Kurdish forces continued to tighten the noose on the remaining extremists.

The battle to recapture the group’s last speck of territory is now only days from completion, Kurdish commanders said, with perhaps several hundred hardcore members dug into the centre of Baghuz village, a hamlet on the banks of the river Euphrates.

A coalition military official said Isis had fired on the wives of fighters as they attempted to flee on Wednesday. Those “arriving to be screened are the wives of Isis fighters, some of whom sustained gunshot wounds while fleeing from Isis”, said British Maj Gen Christopher Ghika.

Mustafa Bali, a Syrian Democratic Forces (SDF) spokesman, said hundreds of women and children had fled the enclave in the last few days. He said the fighters who remained appeared to be among the Isis elite who have lots of experience and are fighting “fiercely”.

“They also don’t have other options. Either to surrender or die,” Bali said.

Adnan Afrini, the SDF commander in Baghuz, said the fleeing families were complicating the advance of their troops, meaning he could not provide an estimate for when the town would be liberated. He added: “There are other difficulties we face like the tunnels, IEDs and suicide cars and bombs that slow down the advance of our forces.

“Right now, beneath Baghuz is like a rabbit hole and there is a network of tunnels that the terrorists are using, and our forces need to clear the tunnels very delicately to avoid counter-attacks and explosives.”

Foreign fighters and families feature prominently among those who have fled Baghuz. The town had been a collection point for extremists who had fled other towns and villages across Syria and Iraq and is thought to be the last redoubt of zealots who had fought in numerous clashes across both countries.

On Thursday Shamima Begum, 19, one of three east London schoolgirls who left the UK in 2015 to join Isis, was discovered in the al-Hawl refugee camp in north-east Syria after fleeing the enclave.

Men and women who fled Baghuz during the week said French fighters featured prominently among the group’s rearguard, as did Iraqis.

Ciyager Amed, an SDF leader, said a number of Isis fighters had also surrendered on Wednesday night and those who remained were likely to be in a tunnel network that had protected them from an intensive week-long barrage.

Jumah Hamdi Hamdan, 53, who said he supported Isis until one month ago, said the group had tried to prevent him and his family from leaving, before he fled on Saturday. “They said that the Kurds would humiliate our women, that men would search them. They said we were walking into the jaws of wolves. They intimidated people and we had to be smuggled out. It was very dangerous.”

Sitting in a separate group, a Syrian woman from Aleppo who identified herself as Fatima Chamsi claimed she had been forced to stay by foreign fighters who had threatened her family with death if they left the fight.

“We stayed until we could find a window, then we took it,” she said.

Russians, families from central Asia, Ukrainians and Canadians were among those to have fled the town during the week, underscoring the global scope of the organisation. Thousands more family members have been housed in a nearby camp, where children born to fighters are now being cared for by their mothers as the international community grapples with what to do with them.

Foreign fighters are housed in a separate camp and it is understood that those who surrendered from Baghuz will join them in the north-east of the country, where hundreds of foreign extremists are being held.

Kurdish forces believe they could claim victory in Baghuz as early as this weekend, and have planned widespread celebrations to mark the occasion. The US administration is also understood to be preparing another victory announcement, which could herald another phase of the contentious US pullout from Syria, announced by Donald Trump in December.

Meanwhile, in the northern town of Qamishli on Thursday, four Kurdish fighters killed on the battlefront a day earlier were buried, and the cemetery soil turned in preparation for more new graves.