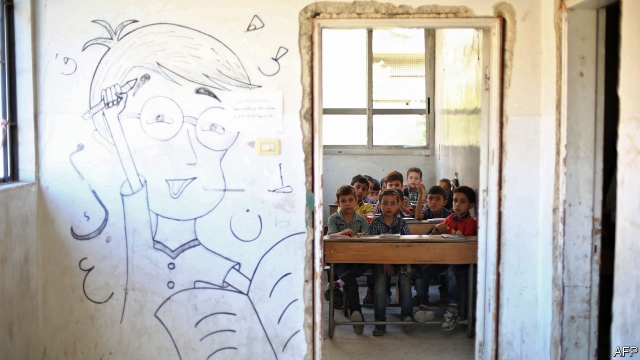 After eight years of civil war, Syria’s education system is a wreck. Nearly 3m school-age children, a third of the total, do not attend classes. That is, in part, because 40% of schools are unusable. Some have been damaged in the fighting; others are being used by armed groups or the displaced. The schools that still function are crammed and there are fewer teachers to run them—around 150,000 have fled or been killed. Unsurprisingly, students are way behind. Ten-year-olds in Syria read like five-year-olds in developed countries, says Save the Children, an aid agency. The literacy rate has plummeted.

The consequences are stark. Syrians lack the skills needed to rebuild their country or to escape the grinding poverty in which 80% of them live. The uneducated are easier prey for jihadists and militiamen offering money and a bit of power, or for Bashar al-Assad’s regime, which will gladly give them a spot in the army. Shattered schools are yet another reason for more affluent Syrians to leave the country—and for those who have fled to stay abroad. “We’ll see the catastrophic results over the next decade as children become adults,” says Riyad al-Najem of Hurras, a charity that supports over 350 schools in Syria.