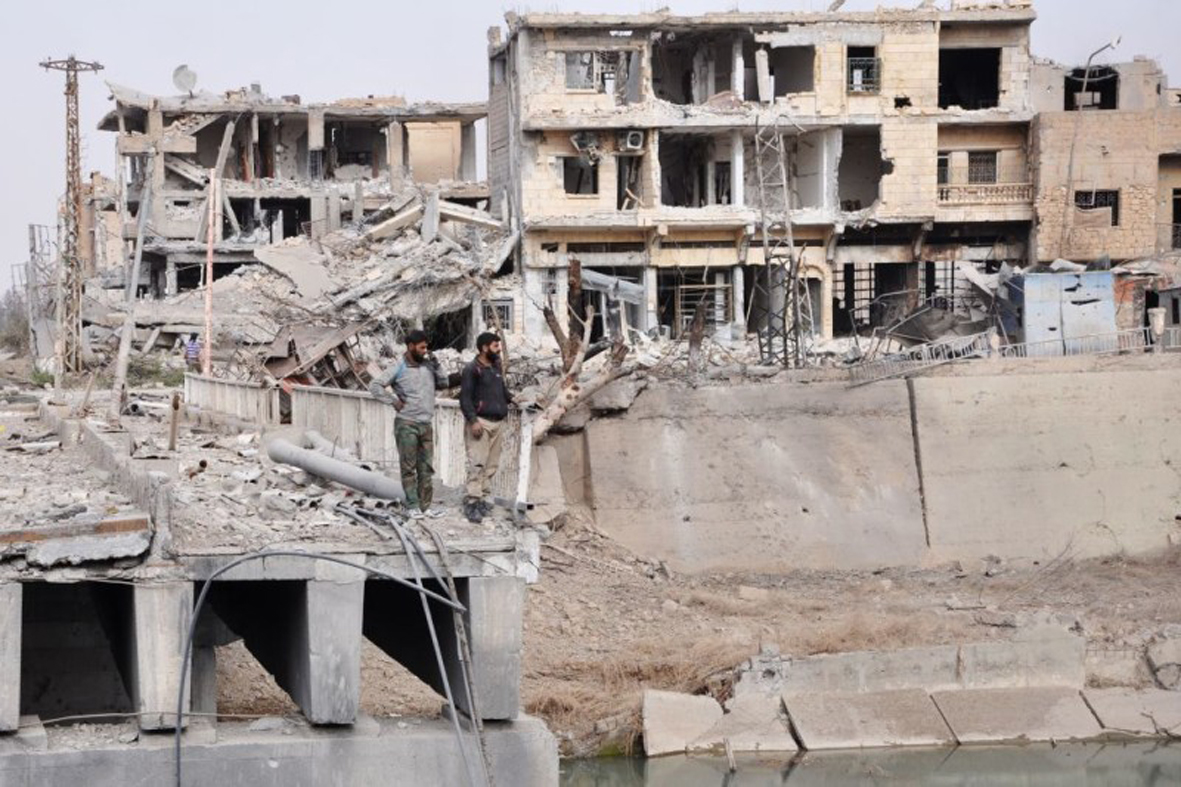 In the city of Deir ez-Zor, the UNHCR has funded a project by the Emaar charity association, whose board of directors is headed by Maher Nuweiser, to renovate and restore 300 homes in the destroyed al-Jubaila district in the city center. There was no open bidding as required for public projects, and the association assigned a property construction firm which is owned by Nuweiser himself to carry out the project.

A source close to the association told Ain al-Medina that the value of the funds from the international organization was more than 350,000 dollars and that Nuweiser prepared a simple, clear plan in which the value of the usual bribery to the intelligence agencies is made part of the project work. The plan is manifested in the head of each security agency out of the four (Military Intelligence, Air Force Intelligence, Political Security, State Security) is allotted 25 hours in the Jubaila district, renovated and restored as a portion of the targeted houses. The amount of damage was inflated in the surveys of the remaining two hundred homes to make fake reparation and renovation work, in which Nuweiser’s company achieves profits of more than 250,000 dollars, out of which it apportions bribes to UNHCR employees and supervisors, including a major employee from Masyaf named Samer Suleiman.

Before the start of the project, the Emaar association put up paper posters saying it was opening up registrations to apply with requests for renovations by the owners of destroyed homes in the Jubaila district. The association made it a condition for the owners who were applying to clean them and remove rubble so that the association’s survey committee could carry out the necessary inspection for each house.

Moussa—a false name—is an owner of a destroyed house in the Jubaila district and today lives in a rented house in the al-Joura district. He told Ain al-Medina that he had borrowed 200,000 lira paid to a cleaning workshop to clear rubble from his house, implementing the association’s condition, and that he waited for the committee inspection for several weeks to no avail before he was told that his house was outside the list of homes to benefit from the project.

It seems that Jamil—another false name—was in a better situation. The committee visited his house and registered the necessary work, which was to “install seven doors, four windows, electrical extensions, paint and fill holes in the external walls.” Later, Jamil adds, “when the workers came they installed the house door, two windows, and reconnected a cable to the breakers. Before doing so, they made me sign a document that they had fixed all the maintenance work I needed.”

Maher Nuweiser’s journey with corruption began when he graduated in 1995 from the college of civil engineering at Aleppo University, and then was appointed to the Directorate of Technical Services and Engineering Work to oversee its projects, which opened the door to quick riches through bribes received by the contractors carrying out these projects. He was appointed director of the Services Directorate before submitting his resignation to put to use what he’d obtained in public contracts, and won major contracting work in the building sector. [NOT SURE ABOUT THE DIRECTORATE NAME]

At the end of 2011, despite the fact that his university average did not qualify him to continue higher education, Nuweiser was able to obtain a doctorate in civil engineering from the American-Egyptian University, a fake university that has no active staff or students—except those like Nuweiser—and closed after it was exposed.

After the revolution broke out, Nuweiser stood with the regime, and maintained his position even though one of his brothers died in an air strike on the al-Hamadiyeh district and another brother was wounded seriously and lost his foot.

“M,” a woman in her fifties, said that she had failed to persuade the association to renovate her house despite her having no resources or breadwinner. “They rejected me and I’m a widow with no one. Meanwhile they renovated three apartments for three brothers because their brother—named Khalid—is a volunteer in Military Security.”

Among the 300 houses specified by the project, 100 were the allotment for intelligence, and out of the remaining houses, the fake work ended in 170 with 30 remaining, according to a source close to the association. He says that the “theft” has not stopped there, but has gone on to include even the workers and observers contracted by Nuweiser’s company to work on this project who have not been paid their due yet.

The funds offered by international organizations and United Nations agencies to carry out humanitarian projects are feeding a network of local security corruption, with Maher Nuweiser one of the most prominent faces today in the city of Deir ez-Zor.