‘On the cusp of death’: Bread and flour run out in Syria’s Rukban camp 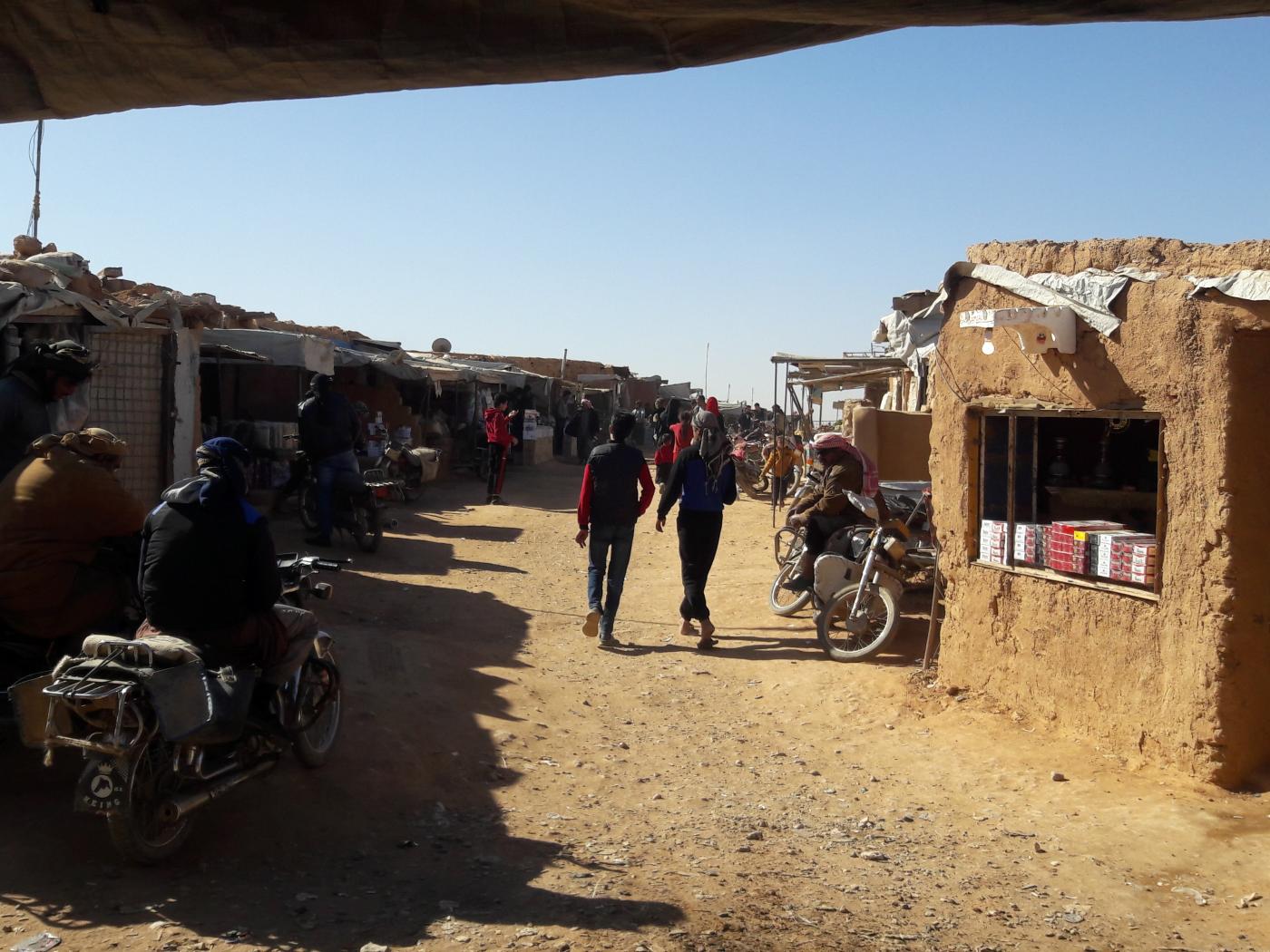 When Abu Ahmad, a young father living in Syria’s Rukban displacement camp, visited the camp’s main market on Friday, he had hoped to buy ingredients for dinner to feed his wife, infant son, mother, two brothers and sister-in-law.

The family live crammed together in one of Rukban’s makeshift mud homes after fleeing their hometown in rural Homs province four years ago.

What little remained of flour, a staple in Syria, where meals often revolve around bread, was $1.36 per kilo.

He went home empty handed. The family of seven went without bread that night.

“We ended up just eating water with zaatar,” a dried herb mixture, Abu Ahmad says. He requested that his real name not be published for security reasons.

On Sunday, Abu Ahmad and other residents said there was no flour left in the camp to buy, even at today’s steep prices.

In the makeshift market that winds through part of the Rukban camp, shelves are reportedly empty of bread. Bags of flour are nowhere to be found, residents say, and a local baker says his oven has been “out of service” for days due to the lack of supplies.

It’s been three days since bread and flour were last available in the remote desert encampment, residents tell Middle East Eye, as an overall shortage of even the most basic food supplies means the prices of other staples such as vegetables, rice and sugar skyrocket.

The shortage is due to a halt in almost all smuggling routes into the camp, allegedly by pro-government forces, in what camp residents call a “siege” of Rukban.

The smuggling routes once stretched from Syrian government-held territory in Damascus and Suwayda, bringing in truckloads of vegetables, flour, soap and medicine that would then be sold at heavily marked up prices in Rukban’s market. Those routes all but halted last October.

These days, only a few trucks make it into the camp from outside, and the prices are higher than ever.

Rukban was never meant to sustain life. The camp’s estimated 30,000 residents live in a barren corner of nominally rebel-controlled desert along the eastern Syrian-Jordanian border.

Most fled to the camp from rural Homs province in the early years of the war, to escape Islamic State (IS).

They hadn’t planned to stay long. Many hoped to cross into Jordan, but Amman shuttered the border in 2016 after an IS-claimed car bombing reportedly originating in Rukban killed seven Jordanian soldiers at a nearby outpost.

In the years since becoming stranded in the desert, Rukban’s displaced residents have built mud homes and shops from the ground up, setting up school tents and bakeries despite harsh conditions.

They’ve got married under makeshift contracts and given birth. Meanwhile, their hometowns have been recaptured by pro-government forces, making many residents fearful of a return home from the camp.

And so they eke out a life in Rukban, despite a marked lack of supplies – or jobs to pay for them.

Organised aid deliveries to the camp are rare, with the last delivery entering in February from the UN and Syrian government-affiliated aid organisation SARC.

When those supplies run out, camp residents are largely left on their own to purchase often steeply expensive food supplies.

Although an aid organisation quietly delivered several tons of flour to the camp via Jordan last month, residents say it wasn’t enough to stave off a crisis.

Media activist Emad Ghali visited Rukban’s main market last week, before the flour cutoff, he says, to record the prices of food staples for others in the camp.

The price of one kilo of flat bread was $0.97, according to Ghali and other camp residents – nearly 50 percent higher than the reported price in Damascus, and prohibitively expensive for Rukban’s displaced residents.

“Like everyone else in the camp, I’m also a displaced person,” Ghali says. “I’m also having trouble paying for food.”

“If we want to buy anything, it’s very expensive,” says Dima, a mother of six living in Rukban. She requested a pseudonym to protect her privacy.

To support her family, Dima used to run a small sewing business in the camp last year, earning at most $13.50 per month making women’s clothing. Her husband made money repairing small portable gas burners known as bawabeer.

But business has long since dried up, she says, and they haven’t had any customers – or income – since last year.
She now visits the market only two or three times per month to stock up on supplies.

“Even if there was flour available in the camp, we don’t have any income to buy it,” Dima says. 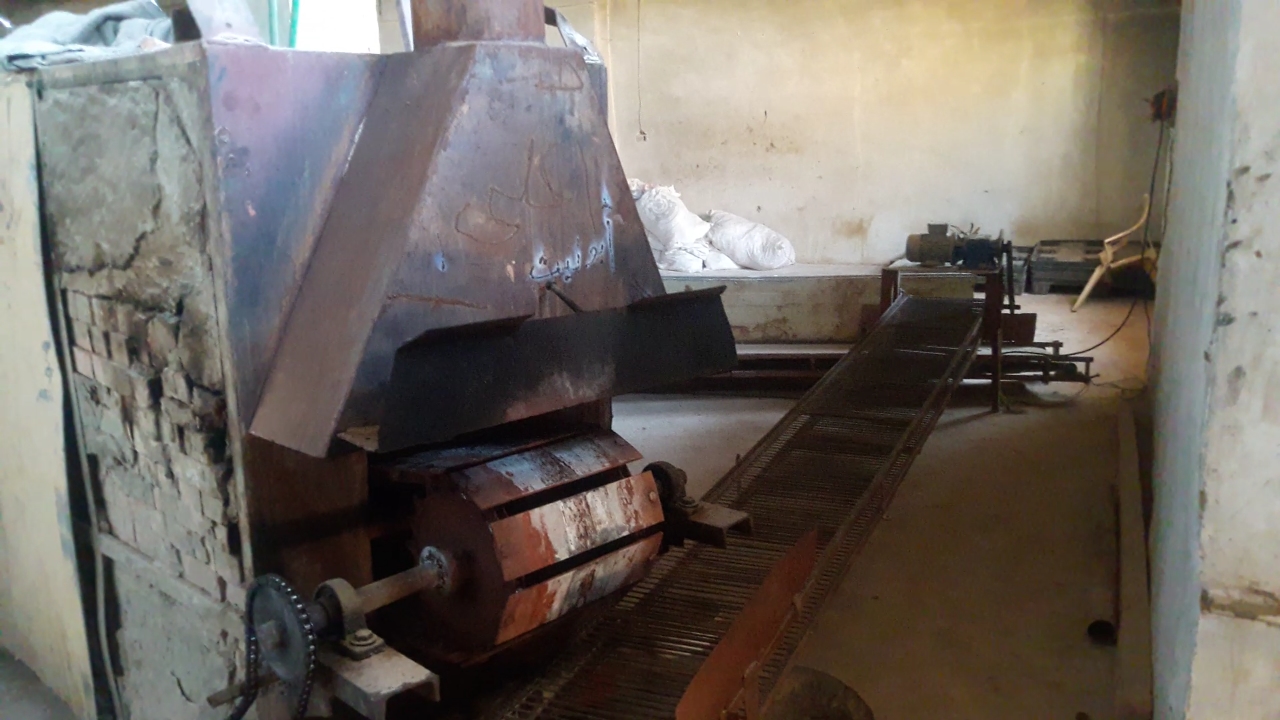 One pregnant woman lost her twins to miscarriage on Friday, due to a lack of food and nutrients, according to Shukri Shihab, a nurse in the camp.

“She didn’t have vitamins,” Shihab says. “She was suffering malnourishment.”

Shihab, who runs a makeshift clinic, says he is seeing an increase in patients with malnutrition, after months of a shortage in basic food items. Most are children and women.

“I now see five children with malnourishment per week, before the shortage I used to see only one,” he tells MEE.

Shihab now receives “four or five” women with malnourishment each week, many of them pregnant teenagers, he says.

That shortage has impacted his own family. Since his granddaughter Maria was born two months ago, Shihab has searched Rukban for baby formula to keep her nourished. He has yet to find any in the camp’s rudimentary market.

And though Maria is healthy for now, Shukri says he’s still hoping to find baby formula to keep her nourished.

“Her mother’s breastmilk, it’s not enough,” he says.

The food shortage comes as the Syrian government and Russia pressure Rukban residents to leave the camp via a “humanitarian corridor” into government-held Homs province.

The so-called corridor has been open since February to Rukban residents wishing to return to their hometowns.

More than 14,000 residents have taken the route, according to the latest UN count, entering a government-run checkpoint in the desert before buses whisk them away to holding centres in Homs city.

Little is known about their fates after returning to government territory.

Some camp residents say they fear military conscription, or detention, due to perceived pro-opposition ties should they return.

But to stay behind in Rukban means to continue surviving in a barren desert with dwindling supplies.

“People are returning to the regime because there is no food here, no supplies, nothing,” says Dima.

The so-called corridor is one part of a sensitive geopolitical balance at play in the area surrounding Rukban.

Near the camp is a US-run military garrison manned by US forces and a local rebel militia, supposedly to help in the fight against IS, which lost its last territorial foothold in Syria earlier this year.

The US-backed forces control a 55km zone immediately surrounding the desert garrison. Just outside of that zone is Syrian government territory, where pro-government militias pepper the landscape.

And through both zones of control, a lone highway winds through the desert, part of an international thoroughfare linking Baghdad to Damascus.

Rukban’s residents are caught in the middle and they have few options.

The UN has been unable to carry out another aid delivery in the months since February’s convoy.

Rumours of a safe passage to northern, rebel-held Syria have not yet played out.

For Abu Ahmad, the young father, leaving the camp for his hometown in government-held Homs is too risky – he is a military defector and fears the repercussions.

He has also ruled out paying people smugglers to guide him north across the desert to rebel territory.

The journey, which involves riding a motorcycle for hundreds of kilometres by night to avoid detection by pro-government factions, would cost him $780, he says. It’s a way out, but one he simply can’t afford.

And so he has decided to remain in Rukban with his family.

With little money left, Abu Ahmad and his wife feed their infant son on breastmilk and sugar water. The adults eat lentil soup.

With no job or steady income, he says thinking for too long about his living situation is “emotionally tiring”.

“We’re living here on the cusp of death – conditions in Rukban are worse than zero,” he says.